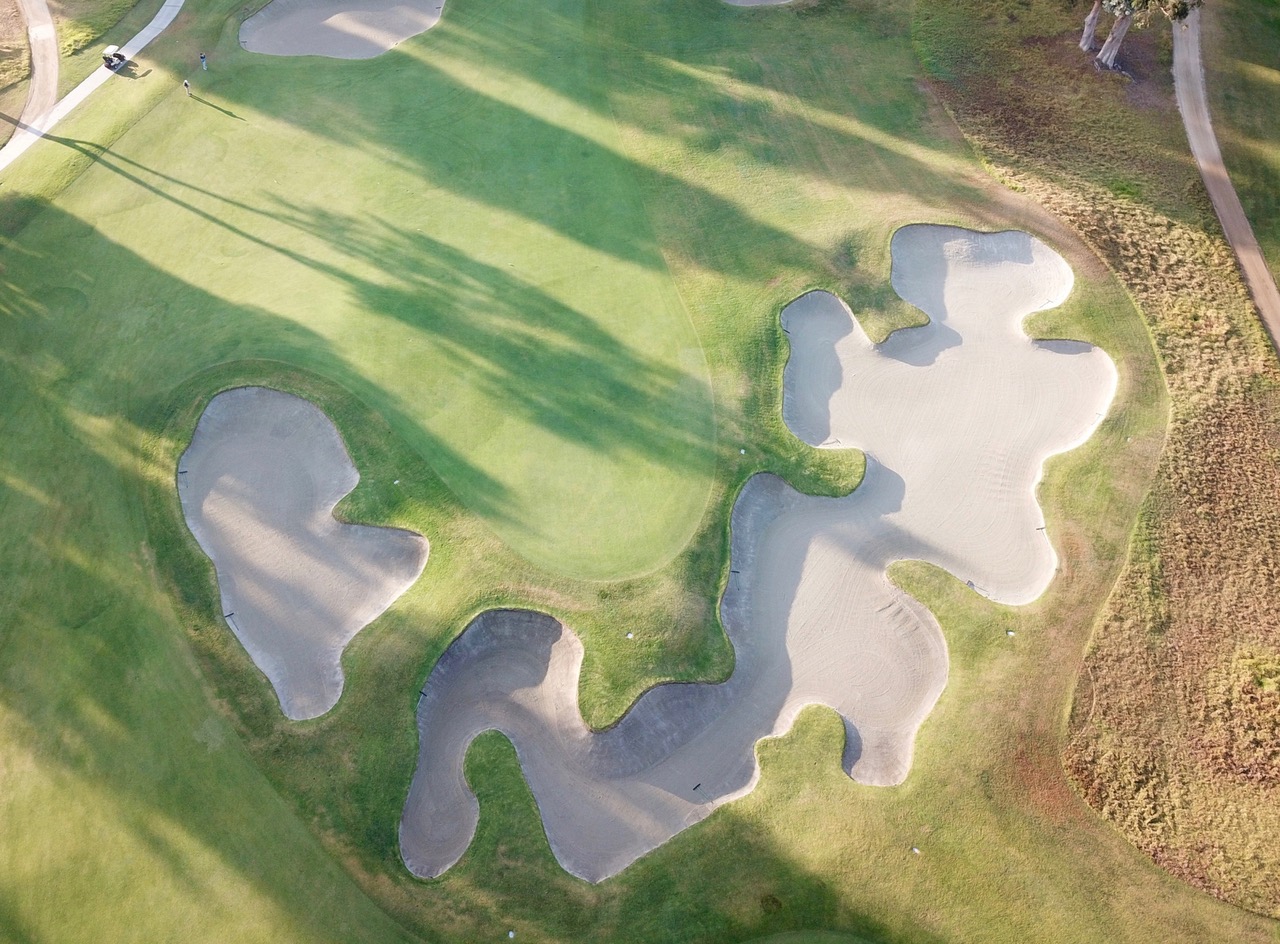 After over 3 weeks on the road , including a fairly demanding trek in Alaska , we were weary to the bone when we landed at Riviera on Sunday night . Michael Robin had again thought ahead and booked us in to stay at Riviera , which is always a pleasure...
We again scored the Ben Hogan room (217) overlooking the first hole , and all was well with the world! 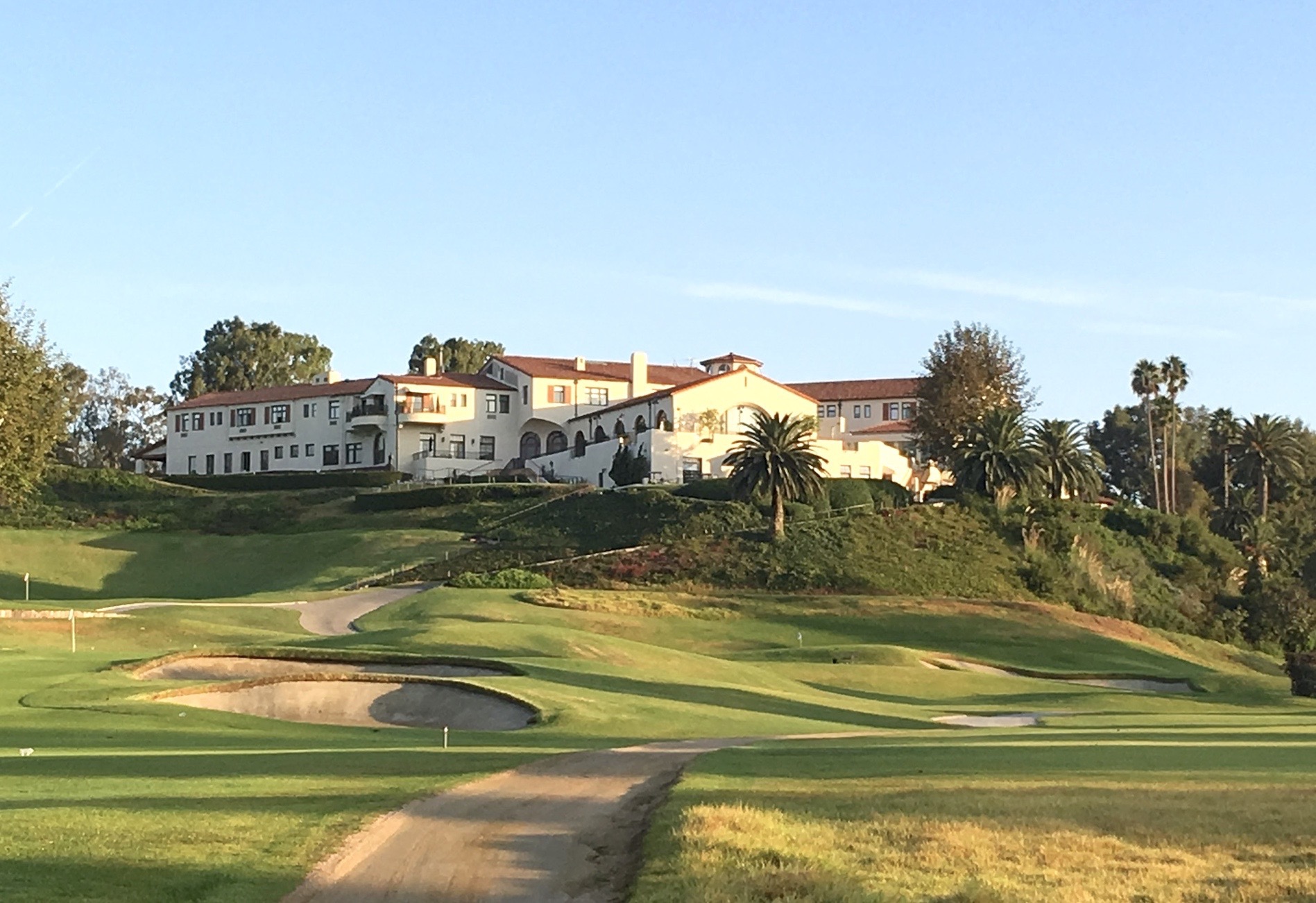 The Clubhouse at Riviera CC
Monday morning an odd thing happened - Heather decided she was too tired to play golf and opted to stay in bed . In over 30 years I have never known her to miss out on anything - I guess that was an indication of just how exhausted we were!
I had a really strange start to the day
First I found that Riviera sort of shuts down in many respects on Mondays , and no breakfast was available
Damn! 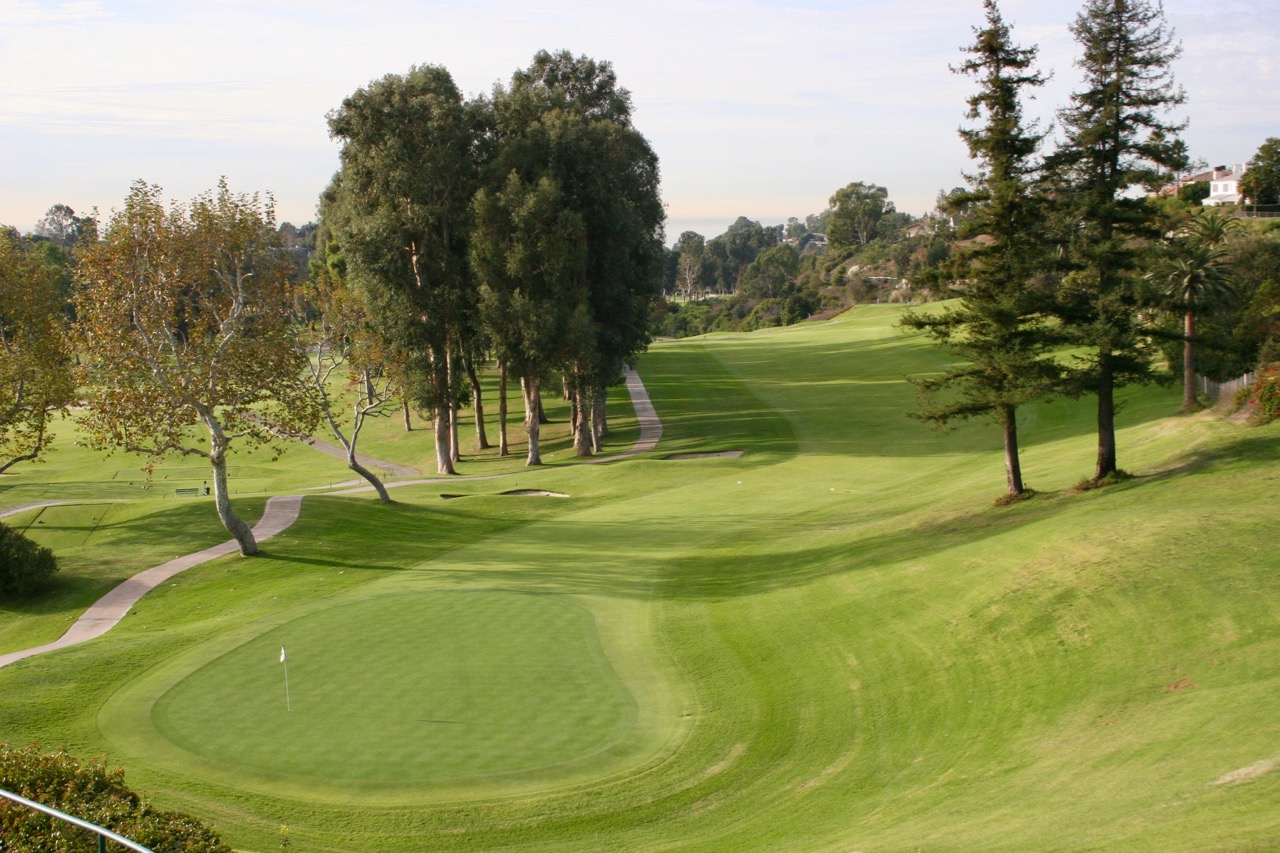 Riviera CC- hole 18
And my back which had been getting increasingly sore in days prior decided this morning that turning just wasn't an option - so golf was going to be a challenge...
Michael had set us up to play with Dick Z , Chairman of the Greens Committee at Riviera , and font of all knowledge regarding the history of the course . He was delightful company , and we basically talked golf architecture for 4 hours . Dick told me how George Thomas liked to start his courses with back to back par 5's , and that Riviera had later made the 2nd into a long 4 , which they are now making longer to cater for the professionals .
After cruising down the first hole , I found the green-side kikuyu on hole 2 , and made a meal of it , taking a couple of flop shots to move the small distance required to the green surface , which although poa annua  , was remarkably true and quick .
On hole 3  , I again found the kike , and things became farcical when the caddie lost my sand wedge . Given that I had opted to travel with less than a full set it became quite a challenge to flop the ball out of the kike , or play a delicate bunker shot with a pitching wedge . Seve I ain't !
Dick explained that when George Thomas originally designed Riviera that the course was hard'n'fast - and had a reputation for being so . However the polo club next door in the valley brought in kikuyu , and it gradually spread over the course . I must say that although I am not a great fan of kike , the better player should be able to adapt , and it is kinda fun to play the short game with such different types of shots required .
Riviera has gained a reputation of being one of the better courses in the world , and is an outstanding example of great golf architecture with a number of quite unique holes , and some which are particularly strategic
Each year the LA Open is held at Riviera , but it sounds like it is unlikely to host a major again anytime soon . It seems the ever growing demand for corporate space , and parking etc has outgrown this wonderful site , near Hollywood in LA . It certainly is a super championship course  . The only US Open held there (in 1948) was won by Ben Hogan , and the last major - the 1995 US PGA  - was won by another great ball striker - Steve Elkington
The course is undergoing some change and I particularly liked the restoration work out the back of the course , bringing the water course into play and bringing decision making to the fore .
Riviera is known to have some classic holes - the short 4 10th is as good as it gets , and the par 3 6th with the bunker in the middle of the green is also well known . But there are no weak holes , and I like both the routing and the tempo of the course - the way the round ebbs and flows , and moves between hard 4's and potential birdie holes
This is a classic course which any serious student of the game should take in .
If you do get the chance to play Riviera , take all of your wedges , practice your flop shot , and don't turn up on Monday - you won't get breakfast , and some holes will be out of play - 6 and 10 have alternate greens which are played on Mondays...
pw
July 2011

Riviera CC is a private members club, and as such is not generally available to members of the public.

The Travelling Golfer can tailor a golf trip to the USA to suit your group. For itinerary suggestions please see Destinations