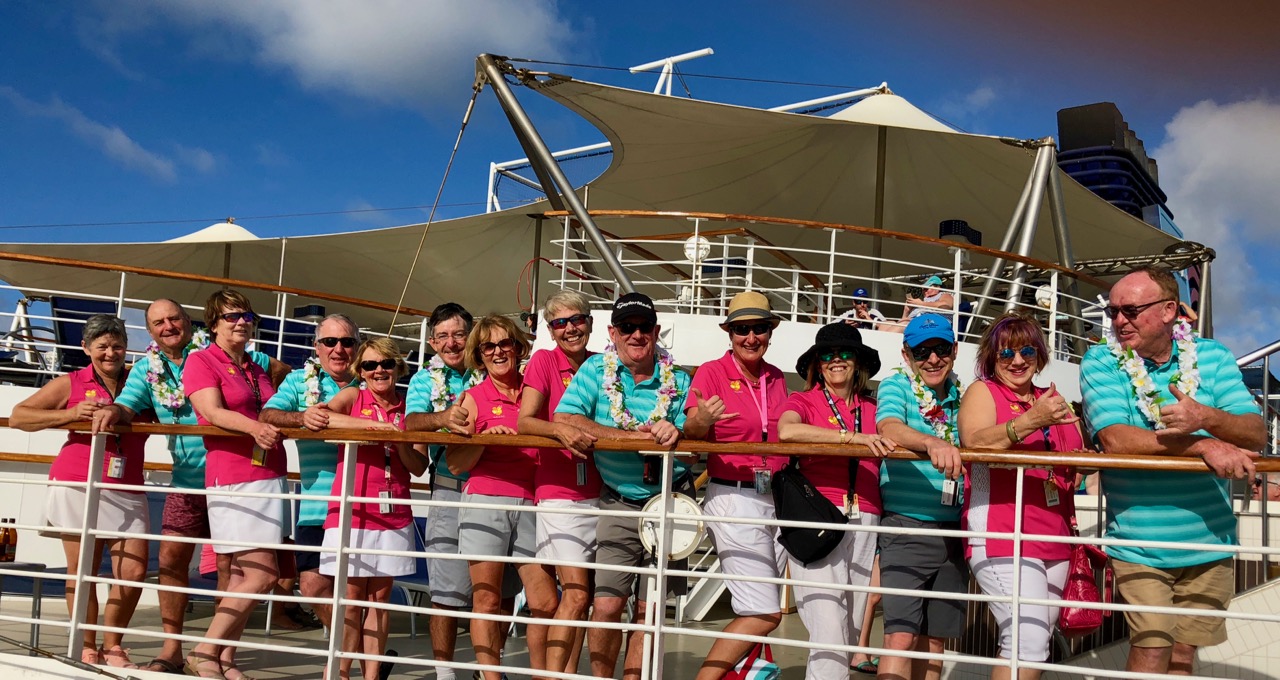 Cruising' with Pride- Hosted Golf Tour of the Hawaiian Islands- 2018

Heather & I arrived into Oahu a day ahead of our guests and used the free day to check out Ko’olau GC in the north east of the island. The course was designed by Dick Nugent and opened for play in 1992

The clubhouse is shared with a church which owns the land on which the course is set- it is an unusual coalition, but it works!

With The Ko’olau mountain range towering over the course, which was set in lush tropical vegetation, it was a memorable setting for a dramatic course 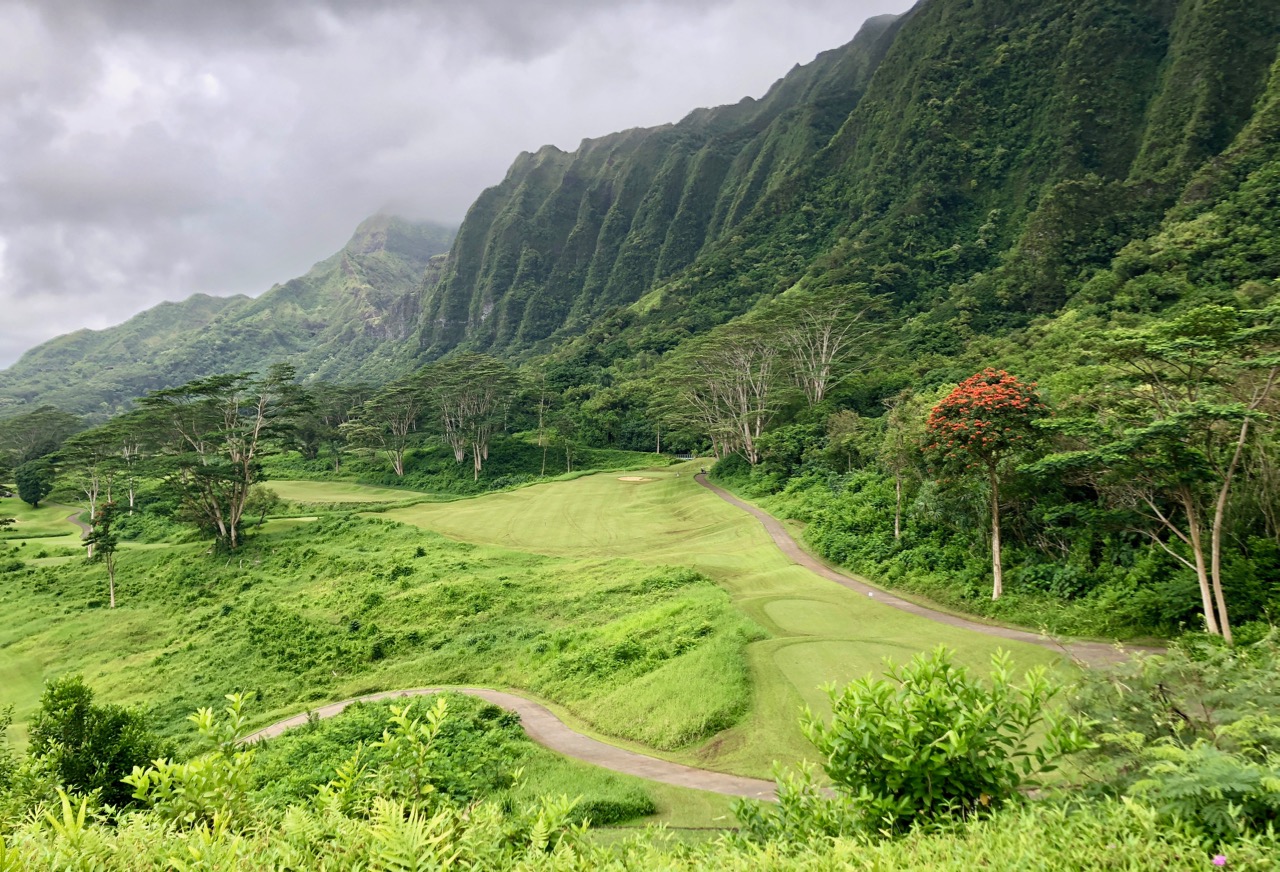 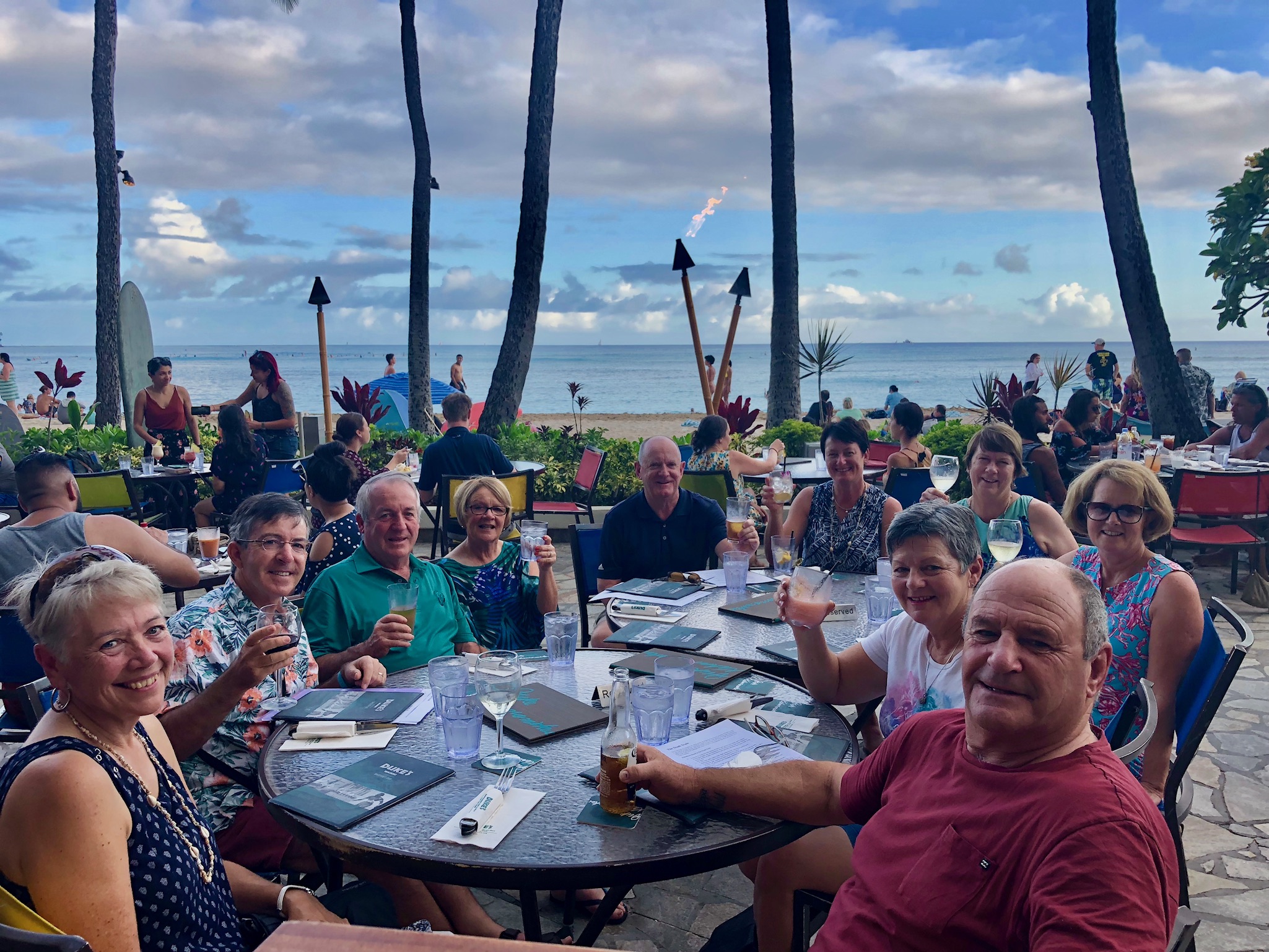 Dinner on the beach at Waikiki

We were picked up at 8am for the transfer to Turtle Bay Resort in the north of Oahu where we played the legendary Palmer course.

The course is well regarded and has hosted many tournaments. The front nine was very resorty, dead flat with palm trees and water, some of which was unseen… 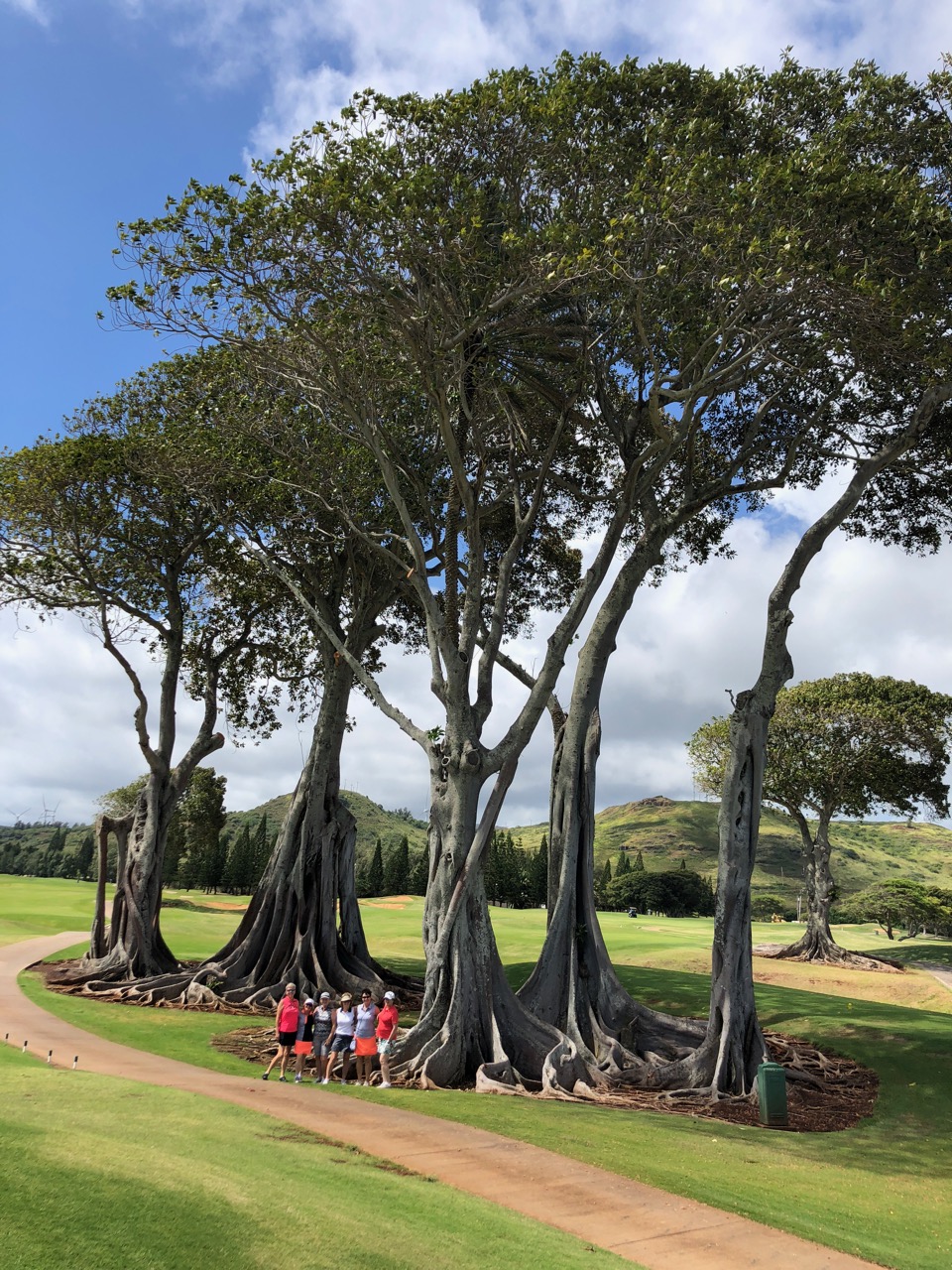 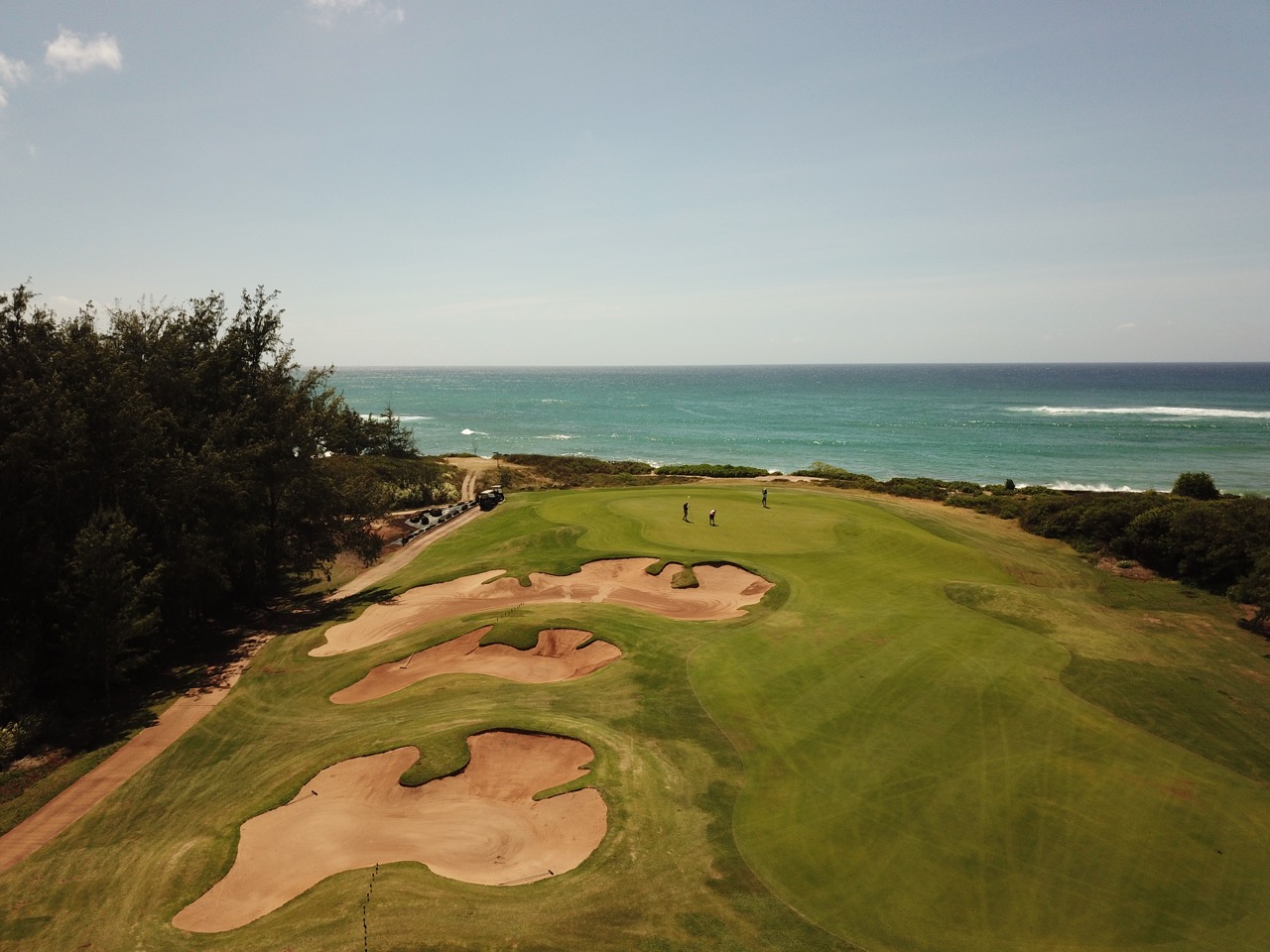 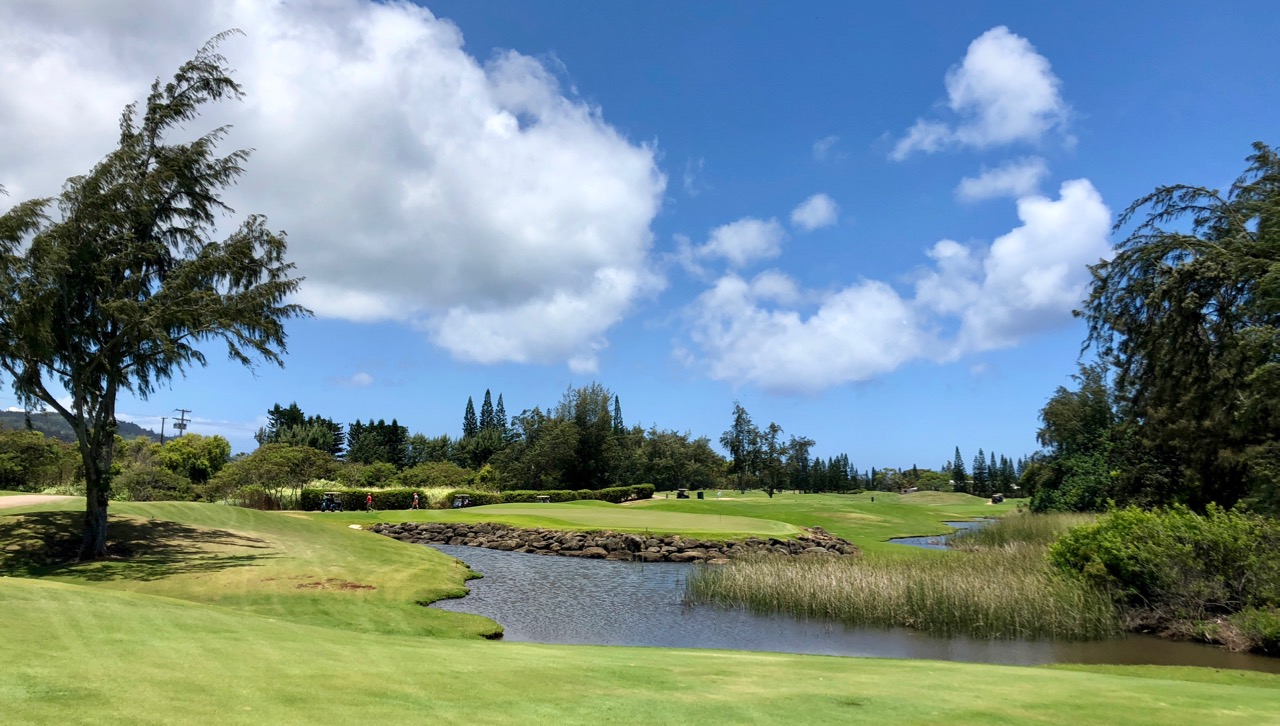 It was decent golf, but certainly not memorable. The back nine stepped it up a bit with lush vegetation framing the fairways, and water hazards more visual and attractive to boot. It was good way to finish

The mens tees were more reasonable and the hazards were not so unfriendly..

Generally speaking the fellas liked it more with tees more appropriate, and the back nine in particular was well received

Winners for the day were Phil and VJ 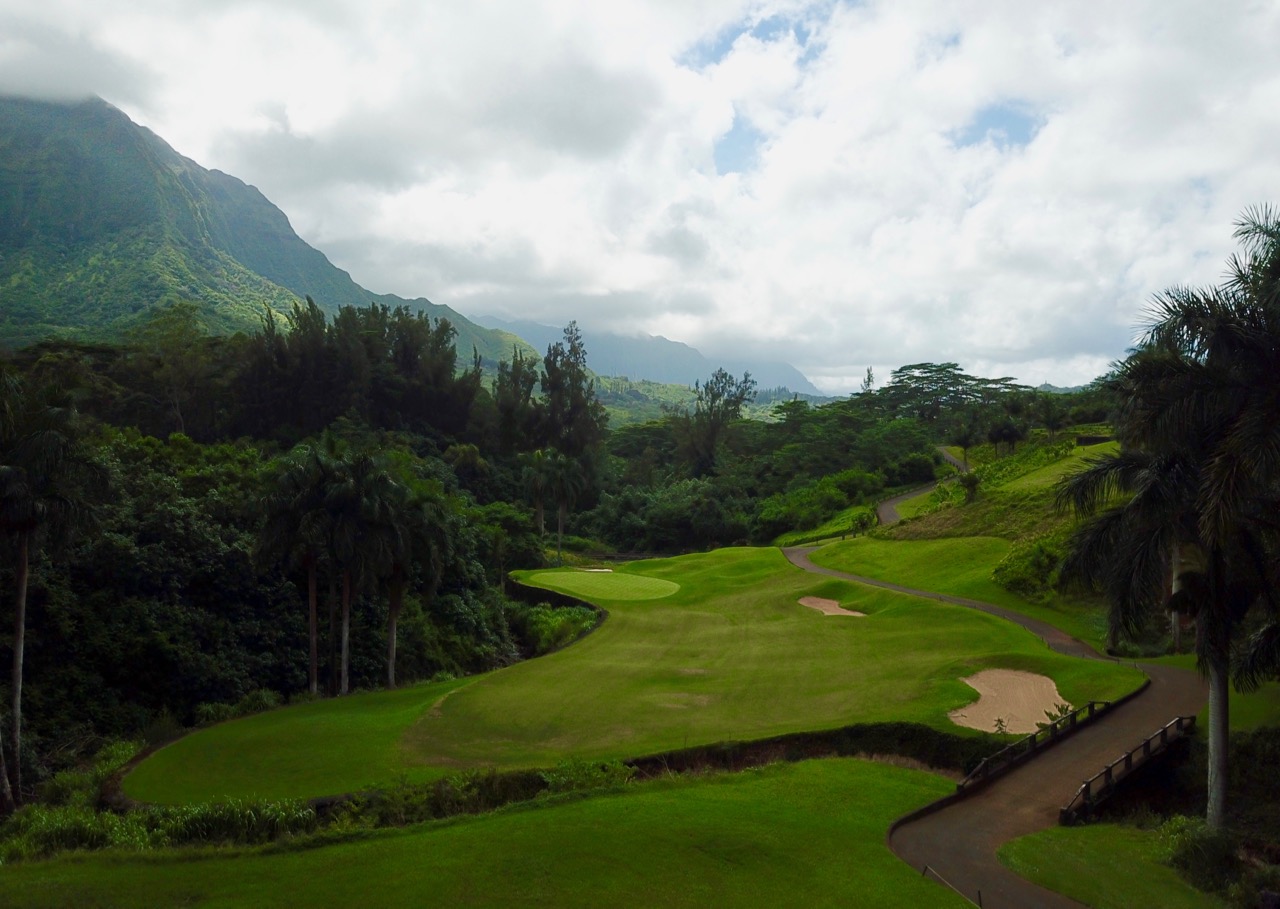 Golf today was at Royal Hawaiian GC, where the Ko’alau mountains tower over the course. Designed by the legendary Pete Dye with Perry Dye, the course is routed through thick tropical jungle and features significant elevation changes and carries over ravines, combined with fairways that twist and turn...

You just never knew what was around the corner!

The front nine was especially dramatic and set in Jurassic Park like terrain the course demanded flight control and accuracy. Miss the fairway and it was generally a lost ball.

The back nine opened up a little and afforded some lovely views of the surrounding mountains.

Most of the group loved the course, although a few thought it was perhaps a tad severe. The conditioning of the front nine in particular was just ok, with constant wet and cloudy weather restricting fairway growth… 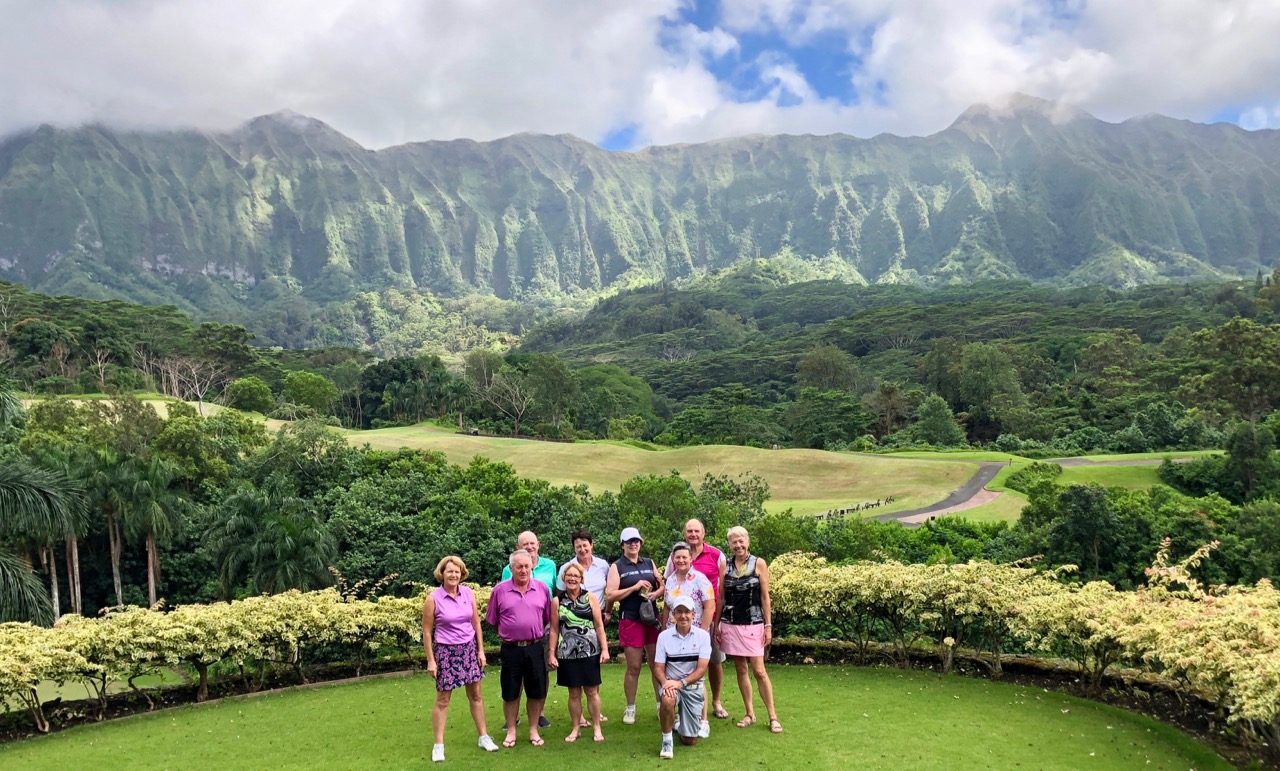 Winners for the day were: Phil, who was again in the money- and Julie Julie Julie. 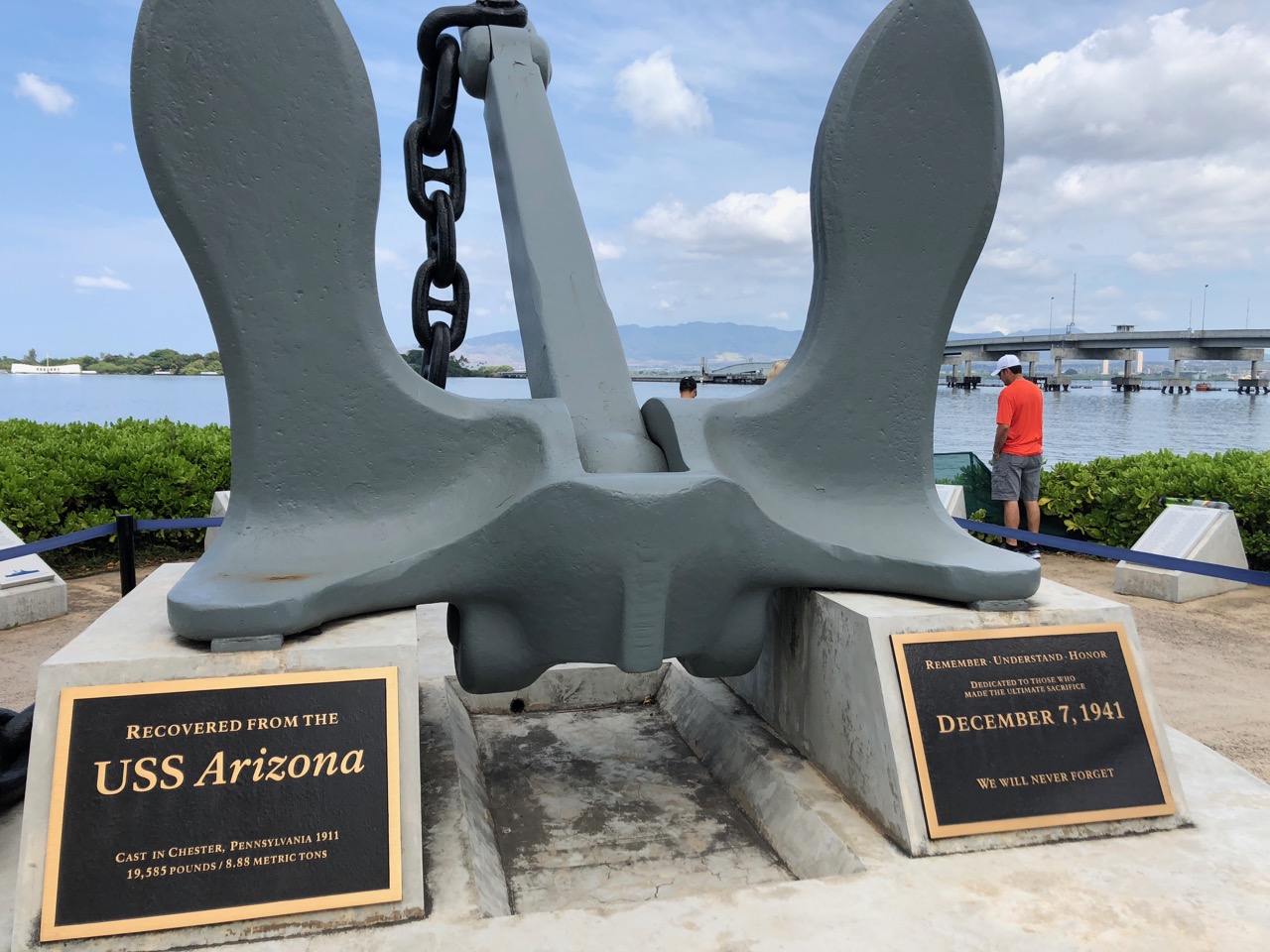 This morning we had to be organised- brekkie, check out of the Outrigger, store our baggage with the Bell hops, and then board the tour bus to see Pearl Harbour.

It was fascinating to be reminded of a large piece of history which played out on this stage. We learned of the build up to the attack on Peal Harbour, how it all happened, and then the aftermath. Amazing footage of the event was viewed, and then we visited the Arizona memorial area.

In the afternoon we headed back to the Outrigger, gathered our luggage and said our goodbyes to our home for the last few days, and headed to meet the Pride of America where we checked in and boarded.. 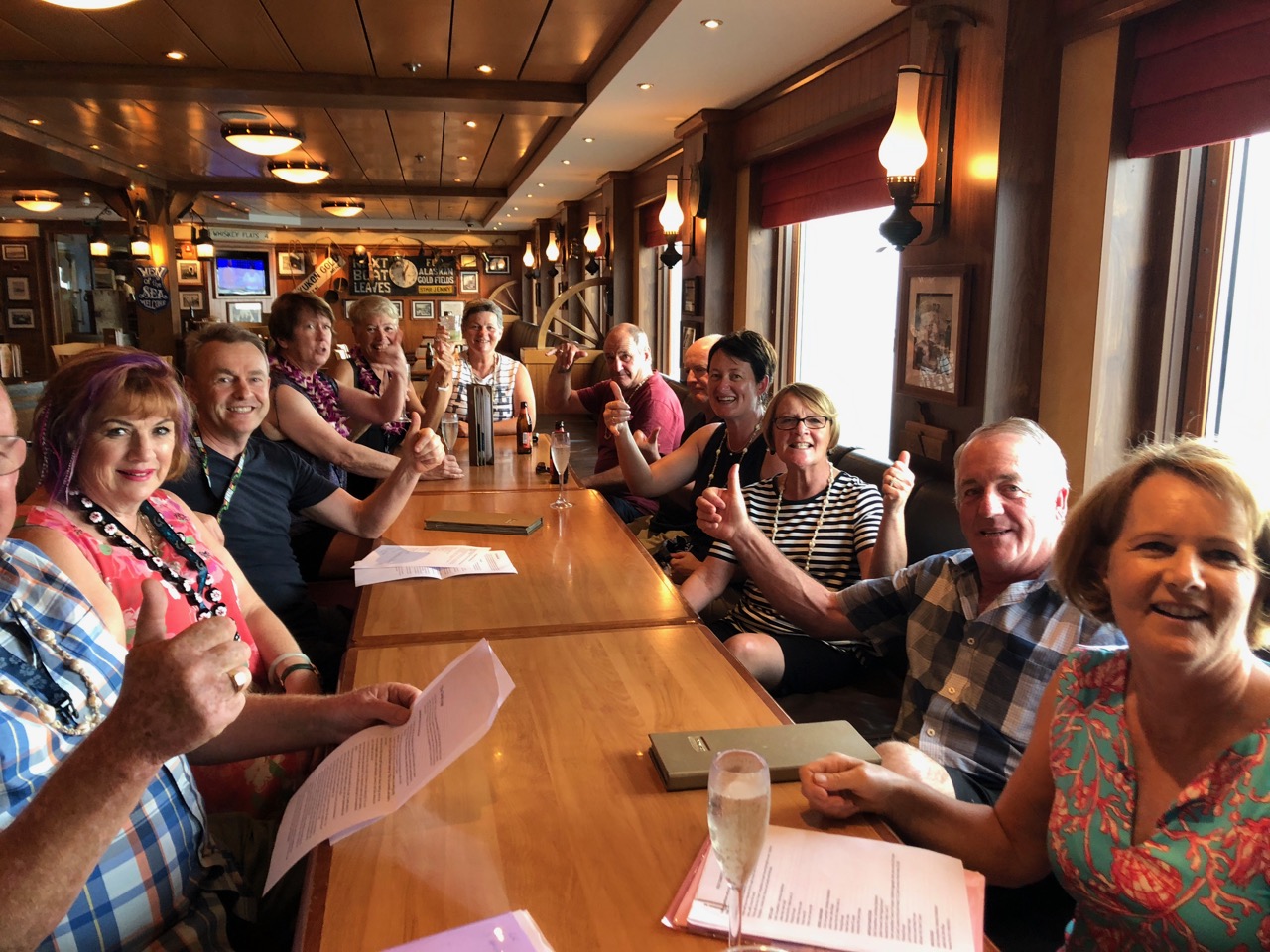 Once we had settled in we shared our opening dinner at the Teppanyaki restaurant where our chefs entertained us throwing cooking implements around like jugglers, while tapping out beats, and actually cooking the meal. Awesome!

Day 1- The Cruisin’ with Pride Golf Tour of Hawaii

Overnight we had travelled to the island of Maui, so at 8am the team met and with absolute precision marched down the stairs with golf bags and disembarked to meet our vans for the transfer to Kapalua.

The Plantation course is famous for hosting the PGA Tournament of Champions each January, and now it was our turn to take it on.

Set on the north west coast of Maui, Kapalua is golf on a grand scale. The course is set on the side of a vast mountainous slope and affords wonderful views of the ocean and the neighbouring islands. The course is exposed to any winds, and is routed over and around gullies, and up, down and across the slopes.

There is enormous variation in the types of holes with some tricky short par 4’s complemented with a number of absolute brutes.

Throw in some very severe greens and anything more than a gentle zephyr, and you will have your hands full scoring well

Janet swept all before her with 5 birdies and 38 points playing majestic golf.

Dinner for some was the Cadillac Bar

Group in tour uniform at Wailea

The Gold Course is one of three courses in the Resort (Gold, Emerald, Blue), and the setting is quite exquisite.

The golf course winds through a colourful garden of tropical foliage with an ocean backdrop.

The sun was shining so the sea and sky were blue, and with a verdant green carpet of fairways and greens, white sand bunkering, and the colours of bougainvilleas- it was a visual feast.

The course was damn good as well, and provided enough challenge for all without being as punishing as Kapalua.

Most thought they could play this course over, and over, and still love it

The pro shop was huge and got worked over by the group, who were happy campers when they boarded The POA again later in the day…

Phil cashed in with 36 points to win the mens comp.

The main story however was ‘The Battle of The Sexes’ where every match went to the wire. The last putt on the last match sealed the deal with the boys winning 1 up. 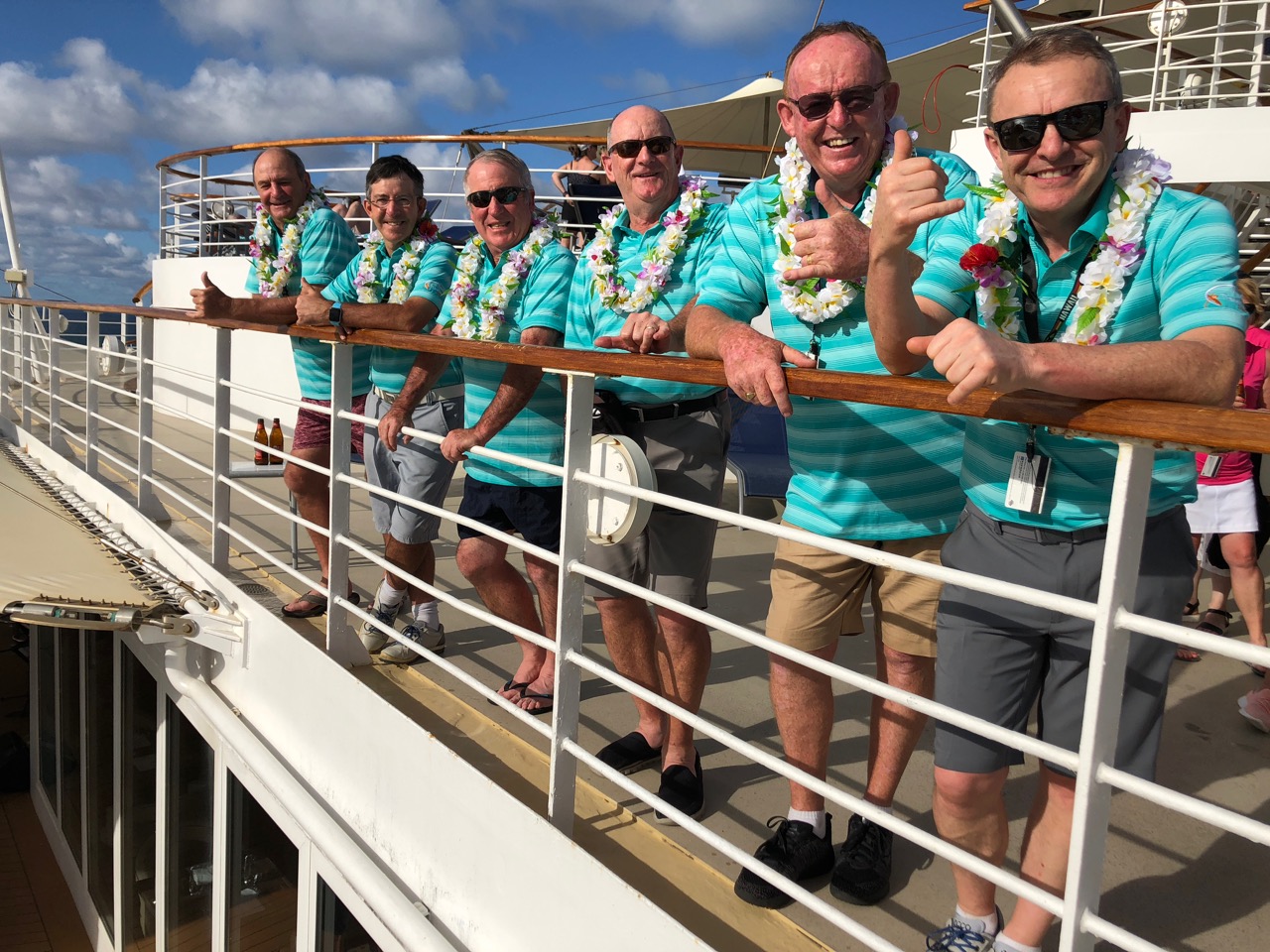 Dinner tonight was at the Skyline restaurant.. 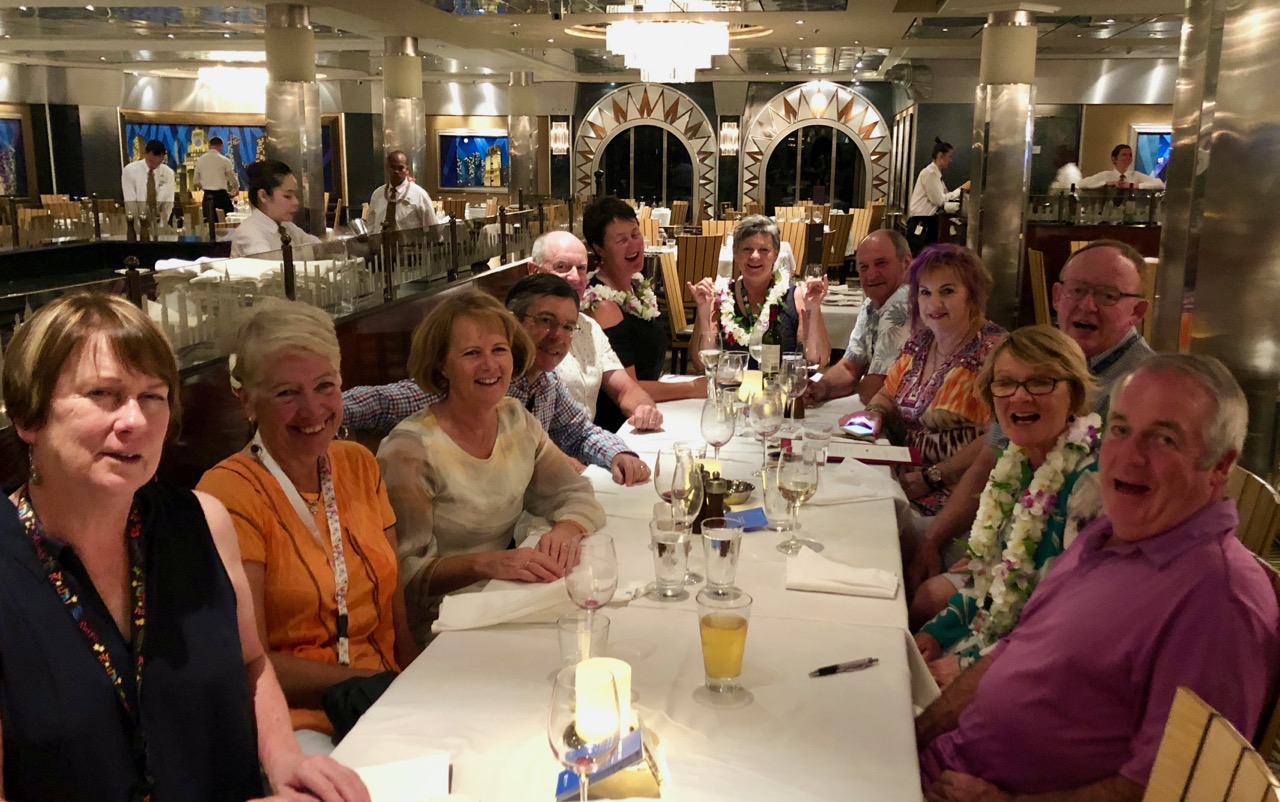 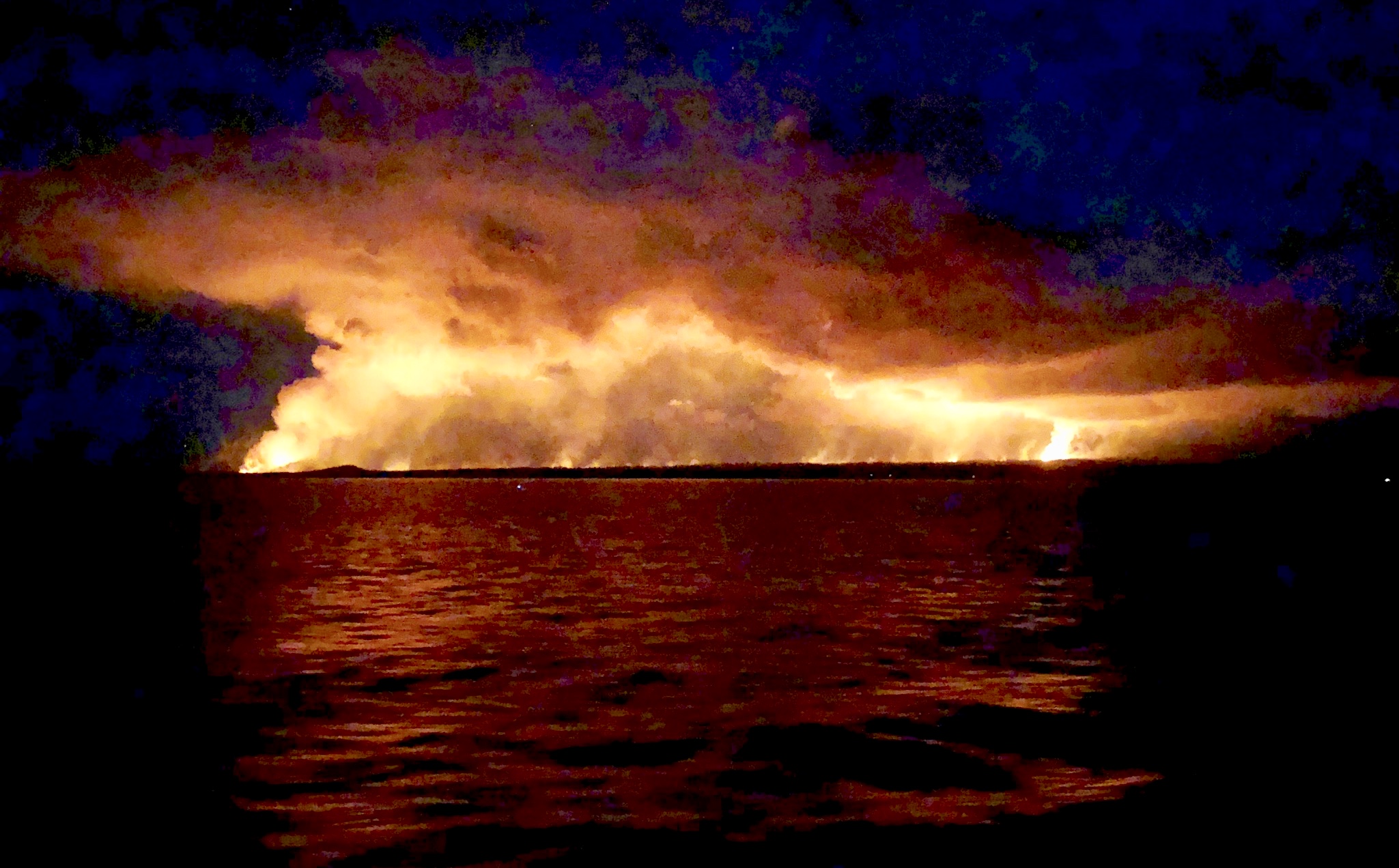 The volcano at night

No golf today, so we all went our own way with day tours. Some did helicopter tours, some went zip lining and others explored Hilo.

Heather and I went into Hilo and then took advantage of the Hoppa On, Hoppa Off bus to see more of the area. Our final stop was Richardsons beach where a popular swimming area has black lava, black sand, and green turtles. The beach was busy and the only turtle we saw was 100 metres distant!

Back on board we were entertained by comedian Jeff Harms, and then al headed to the starboard deck as the cruise ship took us south of Hilo to see the volcano at night.

It was spectacular viewing, and quite a unique experience. 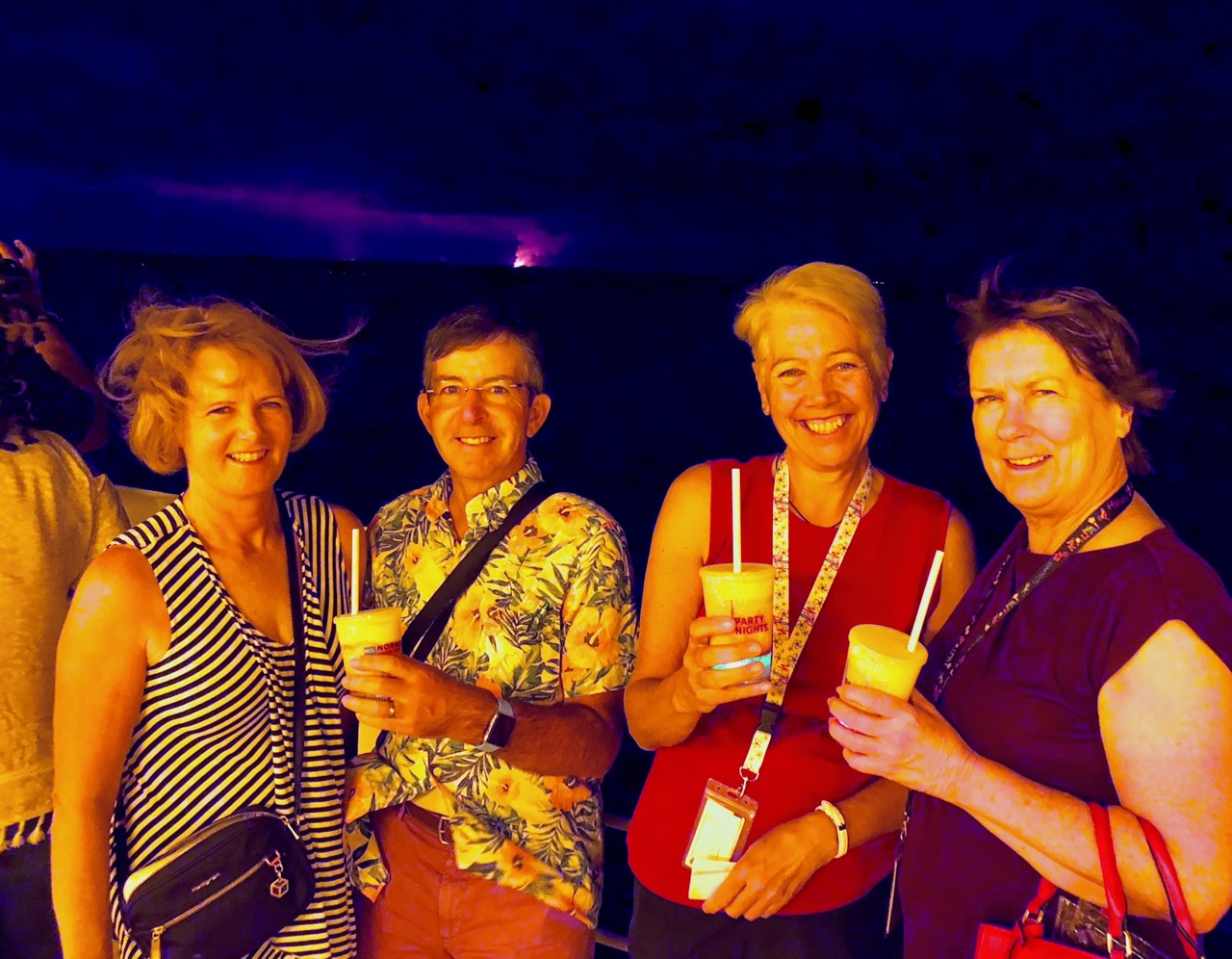 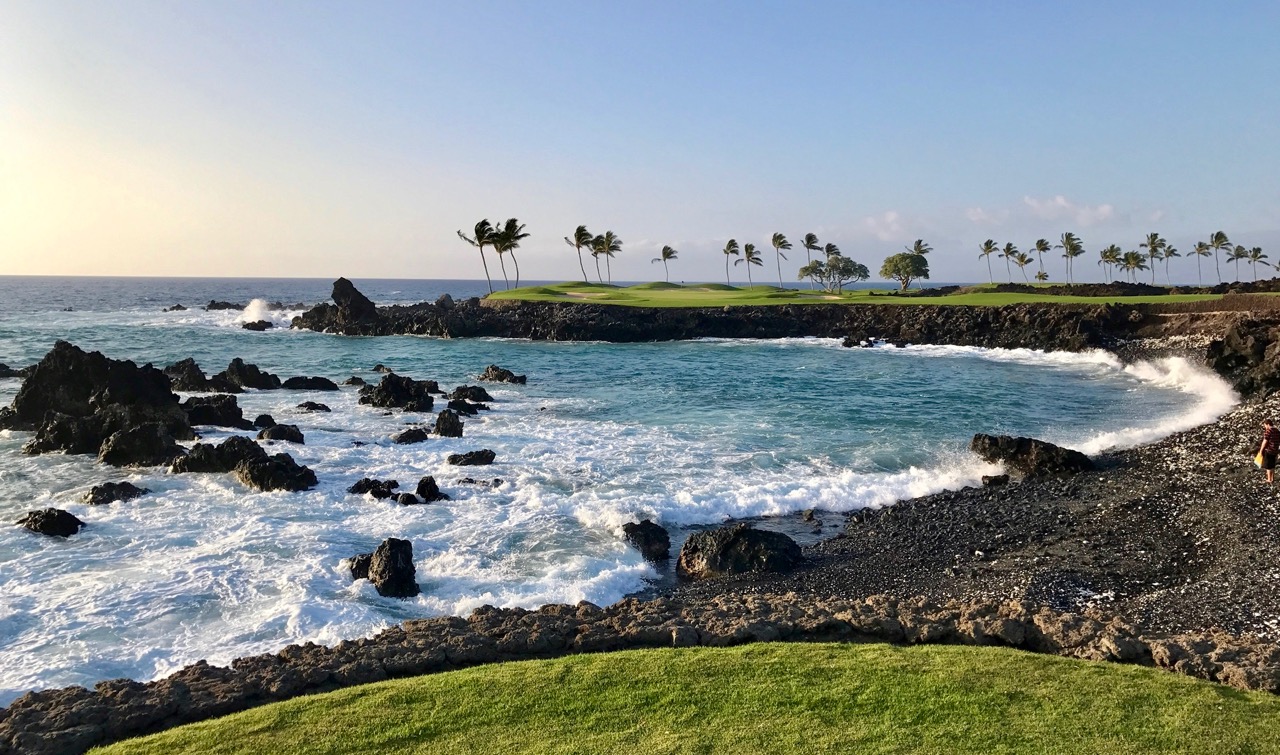 Today we rose early to catch the early tender to Kona where we had organised transfers to take us up the west coast to the Mauni Lani Resort to play  the South course.

Originally Mauna Lani was built as 18 holes by Francis L Brown, but in 2002 Robin Nelson was employed to design and implement a further 18 holes-  creating the North & The South Courses. Both are excellent courses but we selected the south course because it a little more scenic, and something a little different from the other courses played on the trip

The South course is built in black lava, and fairways and playing areas are surround by it

It is a unique look and feel for a golf course

Winners on the day were Hey Paula with 44 points, and Peter D with 38 pts 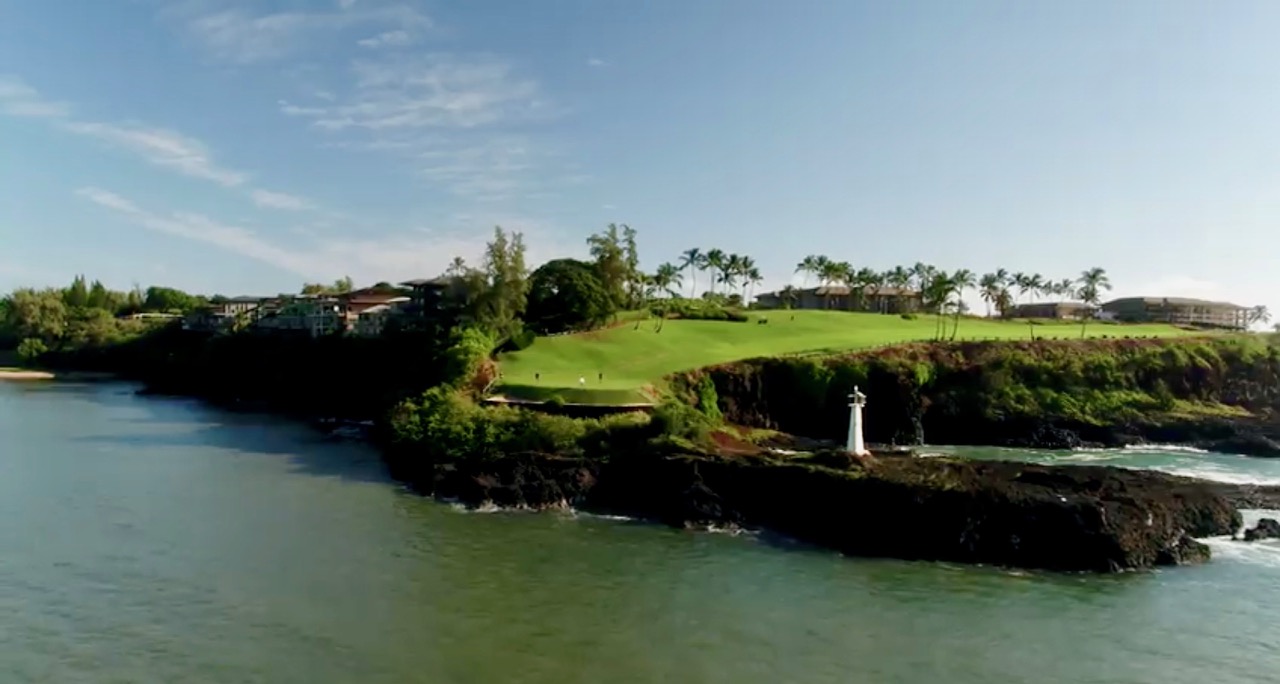 The Ocean Course at Hokuala- hole 16

Golf today was on Jack Nicklaus’ Ocean Course at Hokulua, and again the weather was perfect. The girls had demanded a rematch after their narrow loss at Wailea so today there was plenty of banter about the Battle of the Sexes. It was not to be- the boys cruised home winning all matches, reasserting their authority 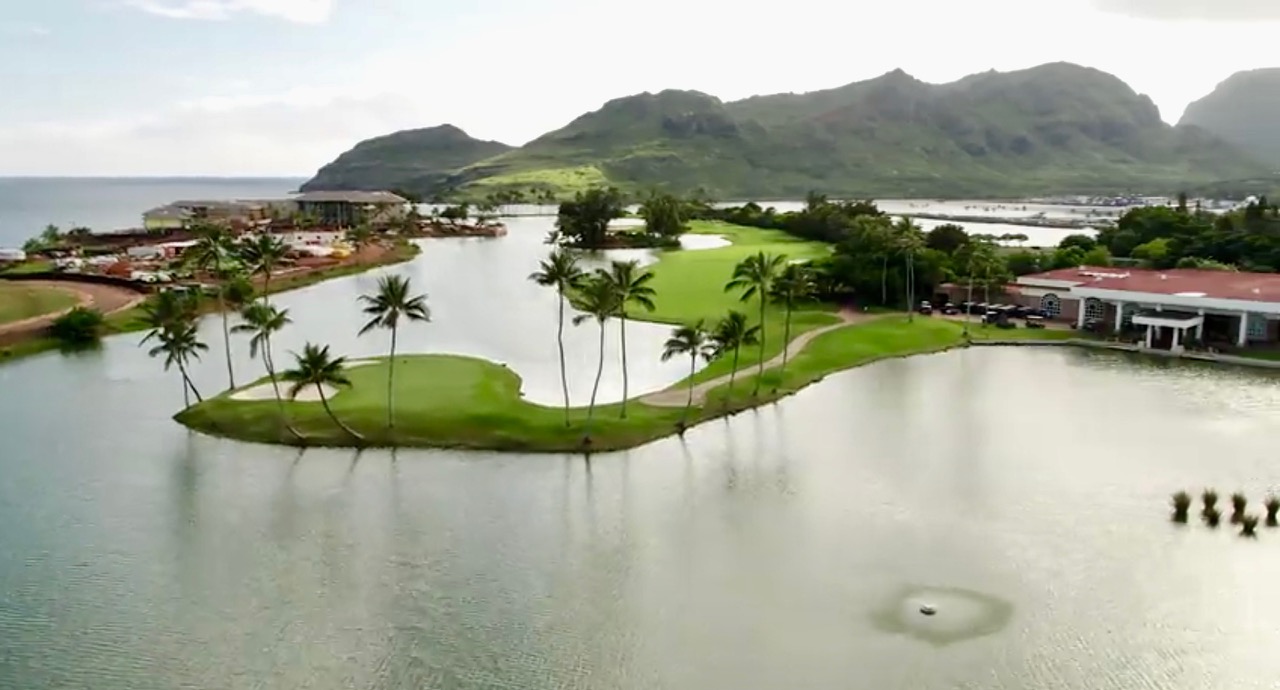 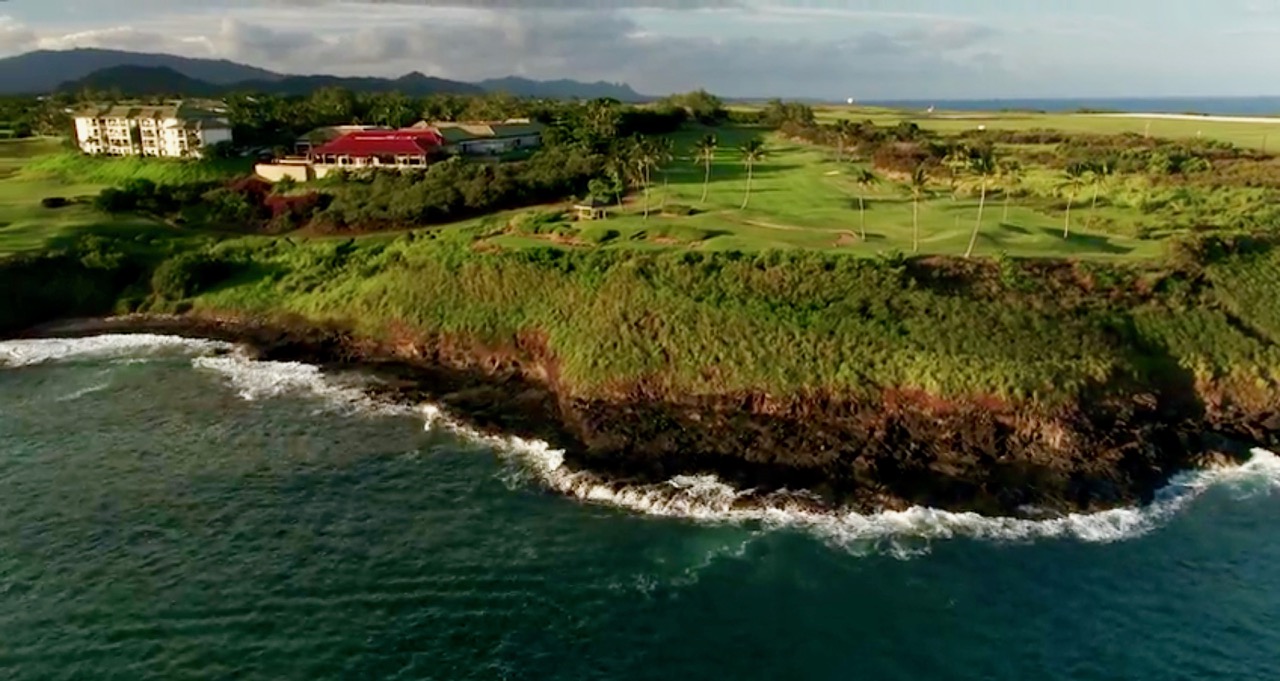 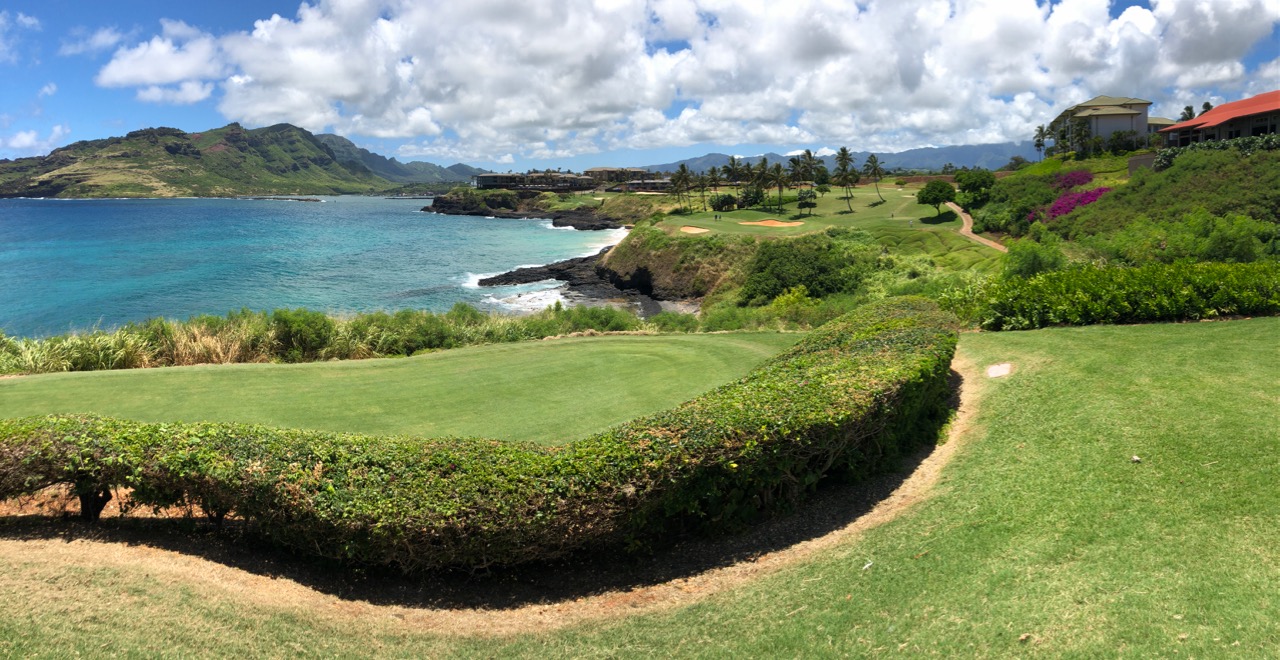 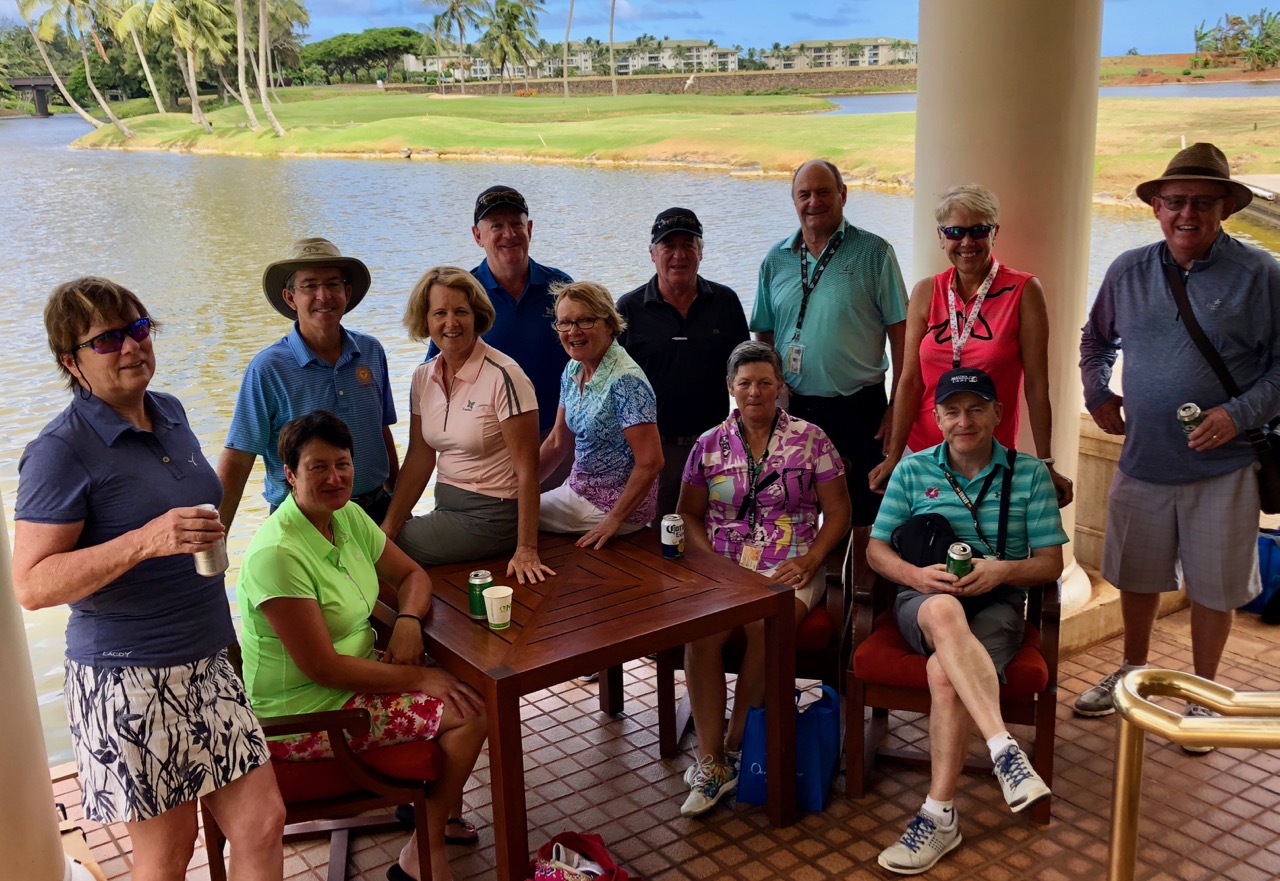 Individual Winners on the day were Janet and Gerry

To top off a wonderful day we joined 750 people at a traditional Hawaiian Luau- an Hawaiian feast with an entertaining show telling the tale of how the early settlers came to Hawaii. The show included music, dancing, fire jugglers, and was beautifully choreographed.

No golf today, so we all went our own ways- kayaking, helicopter rides, The Directors Cut, and The Jewels of Kauai which Heather and I undertook. We toured gardens rated by some as one of the 50 places you must visit in your life.

We were all back on board by 1.30pm for departure, and POA sailed around the north of Kauai and gave us magnificent viewing of the famous Na Pali Coastline

Just when we were all taking selfies and pictures of each other, out came the most magnificent rainbow I have ever seen! 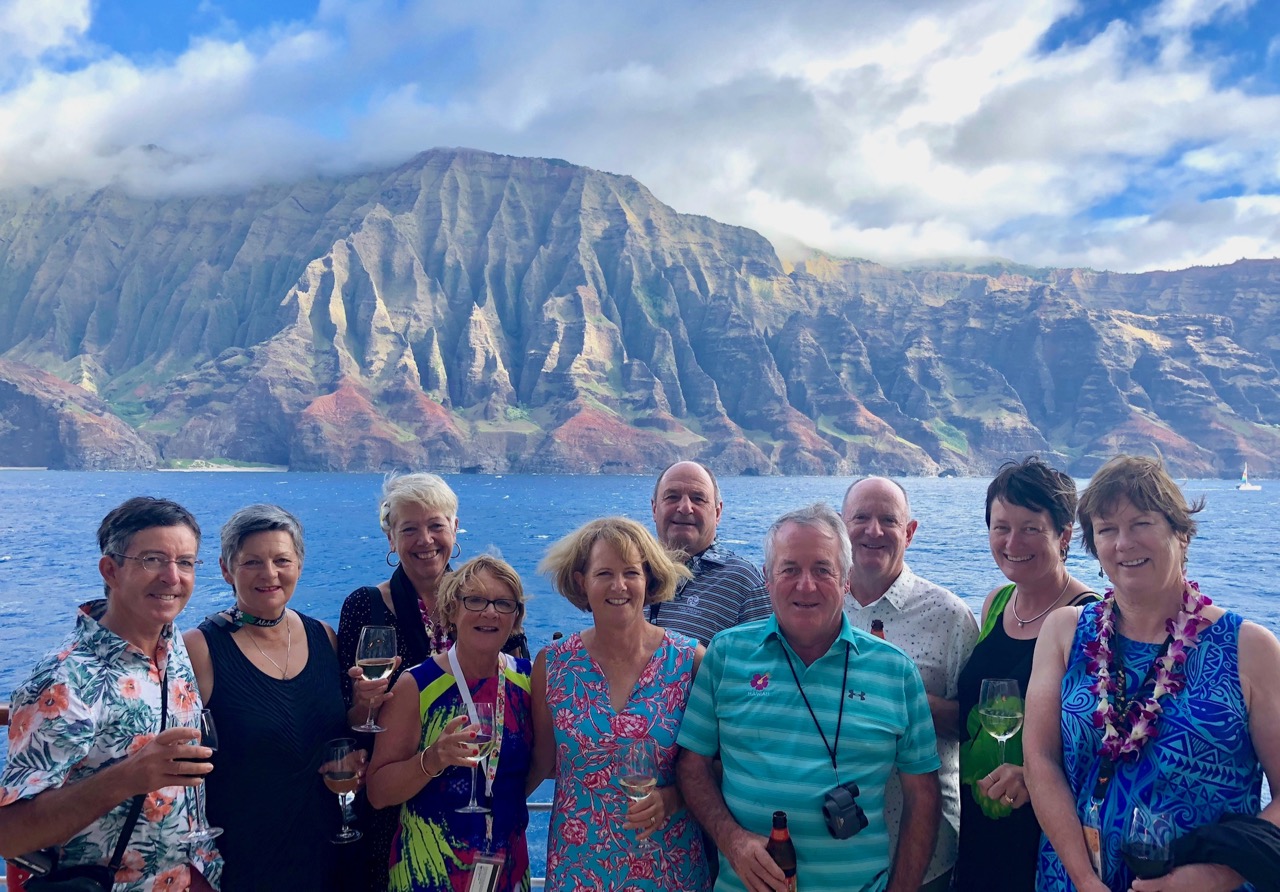 What a fitting climax to a lovely tour!

Of course Janet won the event easily, lapping the field. It was exciting to see a good player back in top form and enjoying the game

Gerry, our fine master, revelled in the task of fining us for our misdeamours- and there were many to report.

Heather also awarded two mugs, for outstanding mugworthy behaviour- The Moneys took home one mug for losing everything- phone, glasses etc- and VJ the other for visiting the mens room and giving Gerry a hell of a fright…

The final dinner was a convivial affair at the very posh Jefferson’s Bistro.

And that was that!

Hawaii 2018 was great fun with a really nice crew.

We should do it again sometime!

Somewhere... over the rainbow