The Old Course at St Andrews is considered to be the oldest course in the world with golf first played there in the early fifteenth century.

It is said that the course basically evolved over time without major contribution from any one person until Old Tom Morris took the lead during his reign as a greenskeeper.

He is credited with designing the opening and closing holes 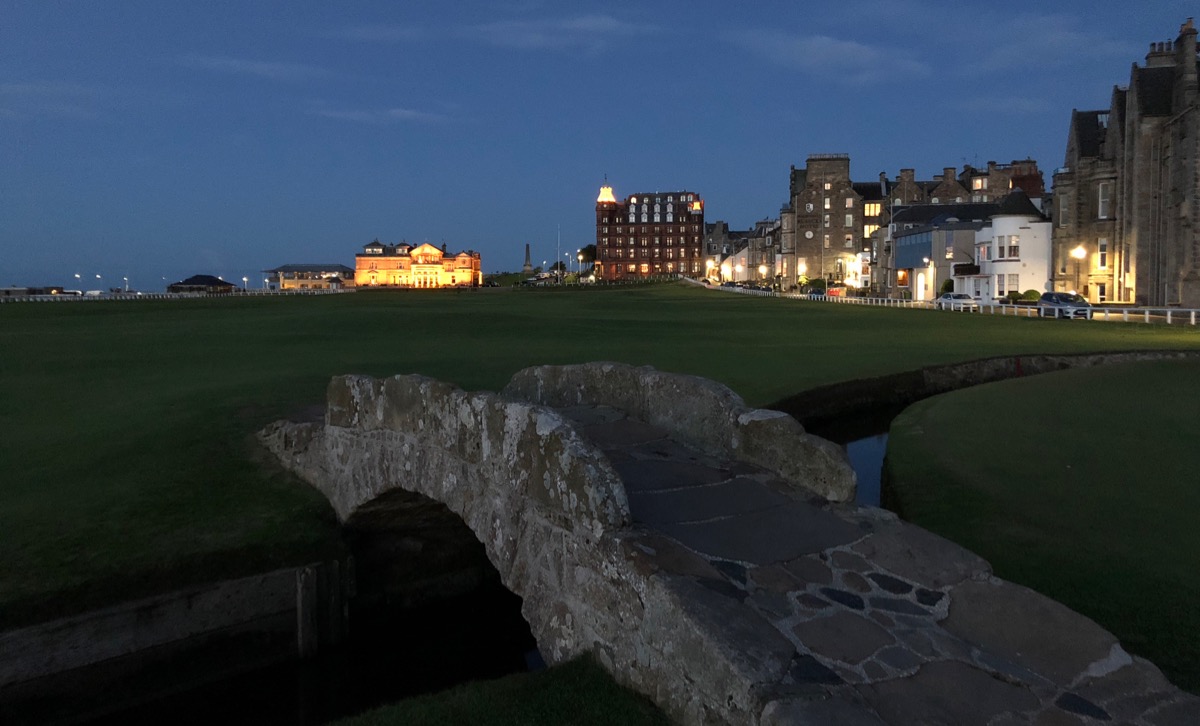 St Andrews is considered 'the home of golf', and the Open Championship is forever linked to The Old Course at St Andrews.

After a lengthy stint at Prestwick, Tom Morris returned to become greenskeeper at St Andrews in 1873, coinciding with the Open being played at St Andrews for the first time.

Prestwick, the Royal & Ancient (St Andrews), and the Honorable Company of Edinburgh Golfers (Muirfield) had all agreed to contribute  to the running of the Open and sharing hosting duties in rotation.

The Open Championship has moved each year since in rotation to a small number of famous links clubs throughout the U.K.- but St Andrews will always be considered it's spiritual home.

The Old Course has now hosted the Open 29 times, and will host again in 2022.

Other championships of note held at St Andrews include: The Womens Open Championship, The Senior Open, and The Dunhill Cup (in conjunction with Carnoustie & Kingsbarns)

Originally the Old Course played out and back on the same fairways and greens each way and was a 22 hole course with only the 11th and 22nd holes played once.

In 1764 changes were made to join the first and last four holes thus creating the 18 hole course that was to become the standard world wide.

Old Tom Morris separated the 1st and 17th holes in 1863 to finalise the layout that has become so famous over the years- with seven double greens and only four single greens.

I have played in all manner of conditions, played with friends, with strangers, in perfect golfing weather and on days where no one should be allowed out.

Each of these days will stay with me forever!

So how does one evaluate the golf course?

The village of St Andrews dominates the opening and closing holes and they are both strategically strong, and visually stimulating with Swilcan Burn & Bridge, the clubhouse and village all intregal components in the experience 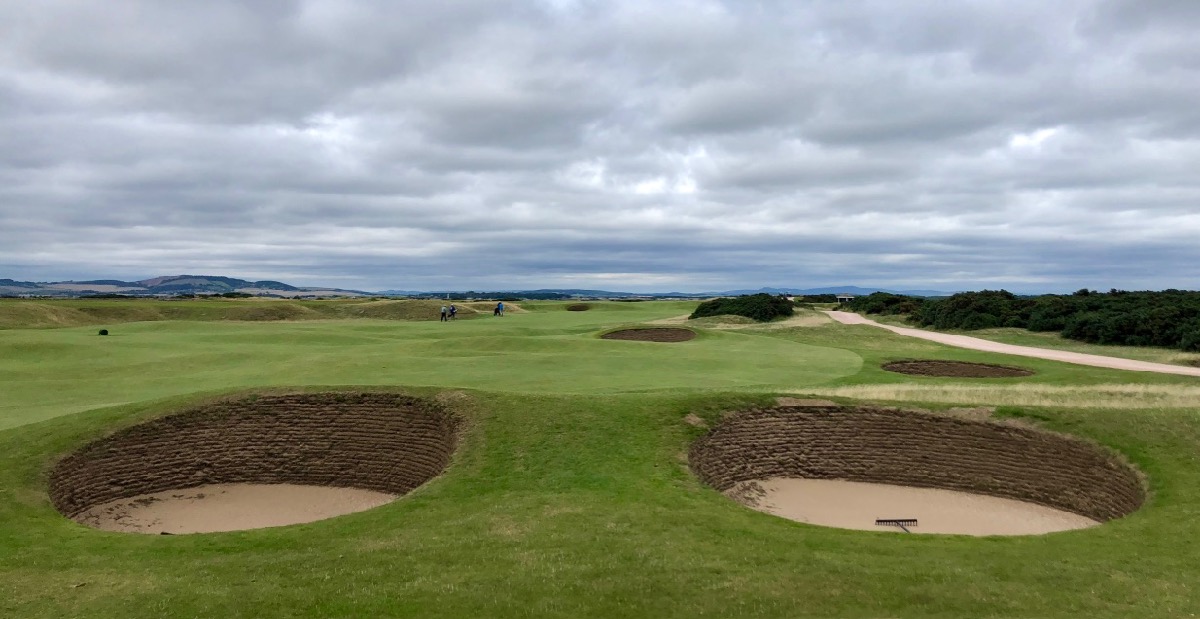 It is so important to stay out of the bunkers and give yourself a decent line to the flag.

The first time I played The Old Course I walked the course the night before and took note of where the fairway bunkers were.

I parred the front nine, but it all came unstuck on hole 12 when a tee shot down the middle of the fairway disappeared into a deep pot bunker unseen from the tee!

It really is a magical mystery tour..

So many shots are partially blind, and the fairways pitch and heave sending the rolling ball off in unexpected directions

The Old Course is so different to our weekly game of golf at home, and many will struggle with it.

It can and will penalise apparently good shots with cruel bounces and it is definitely not a pretty course and does not photograph particularly well.

However if you can embrace that unique old world links brand of golf, perhaps hit some bump'n'run shots rather than pitch in the air- you will inevitiably come away with a smile on your face

The caddies are top notch- they know the lines, but also the type of shot required- and they read the green so well! 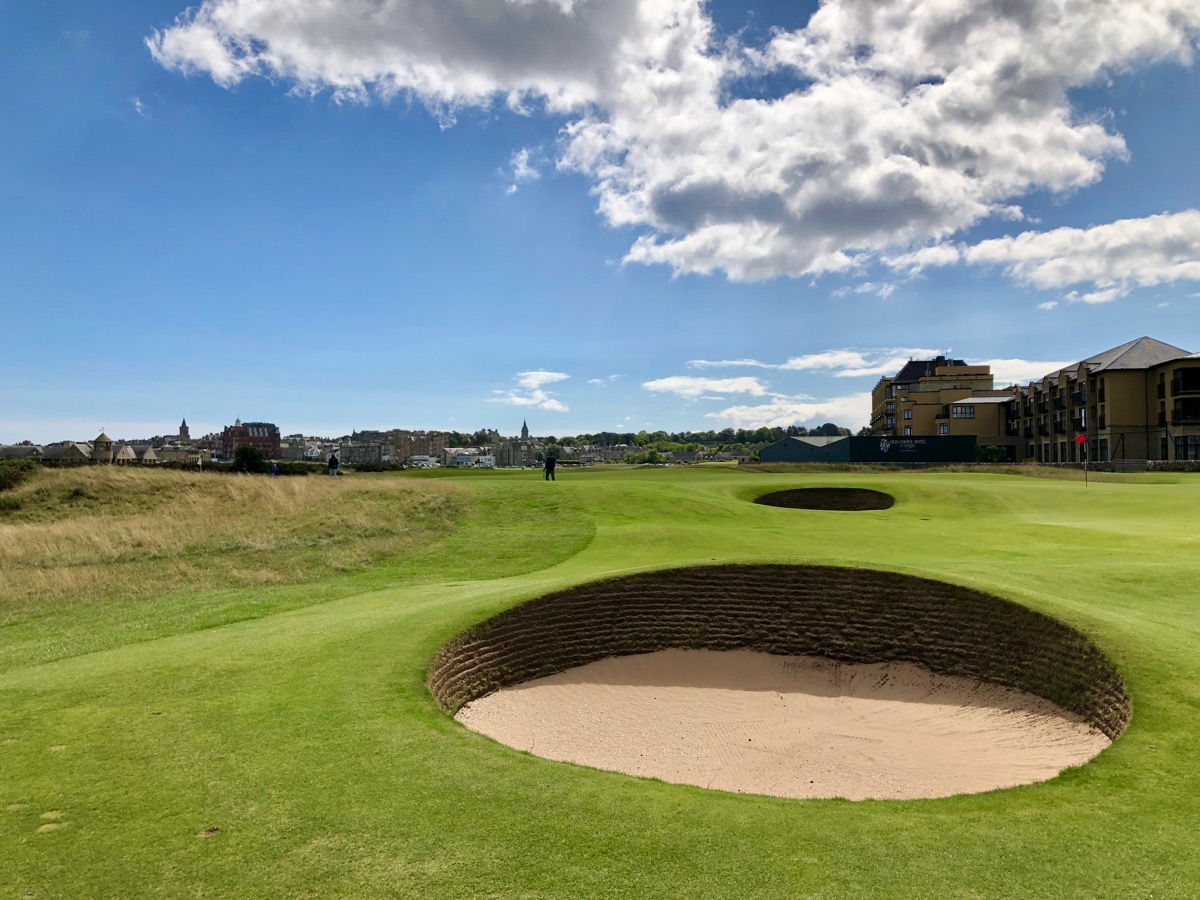 Playing The Old Course is a life experience every real golfer should aspire to- combining a wonderful old world links with the chance to partner up with an accomplished caddy- all at The Home of Golf!

Where else can you get nervous about an opening tee shot with a fairway so wide you cannot possibly miss it?

And the wonderful short approach to the final green with a an expectant crowd watching the action..

- hole 1 (Burn), a short par 4 with the widest fairway in golf, followed by a scary approach over the Swilcan burn

- hole 14 (Long), an epic par 5 where Hell bunker intimidates on the second shot 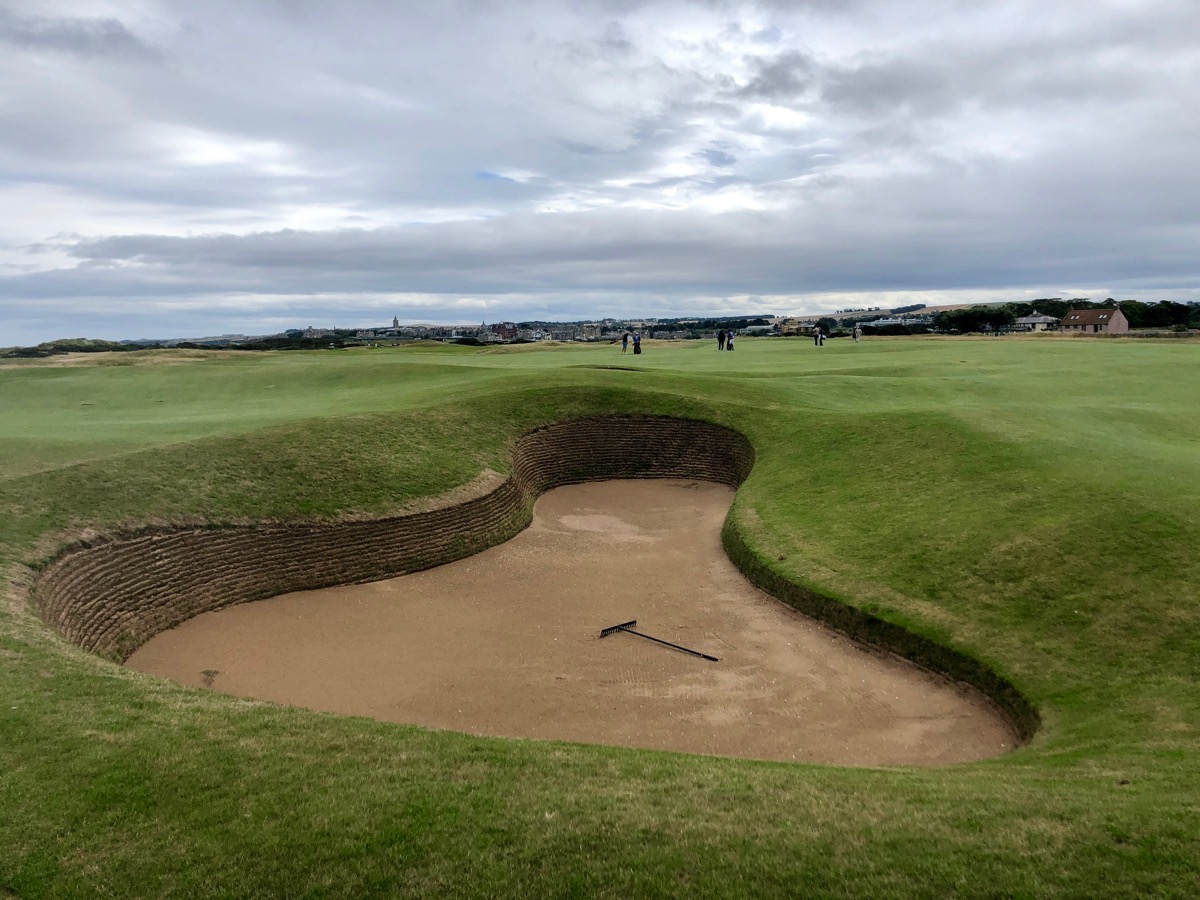 - hole 17 (The Road Hole), a long par 4 which famously plays over the corner of the hotel off the tee. You are then faced with a long approach to a shallow green protected by one of the deepest pot bunkers in golf on one side and the road and wall on t'other!

- hole 18 (Home), a short par 4 with a tee shot over the Swilcan Burn, and a short but famous approach to a vast rolling green where 'the valley of sin' awaits anything short 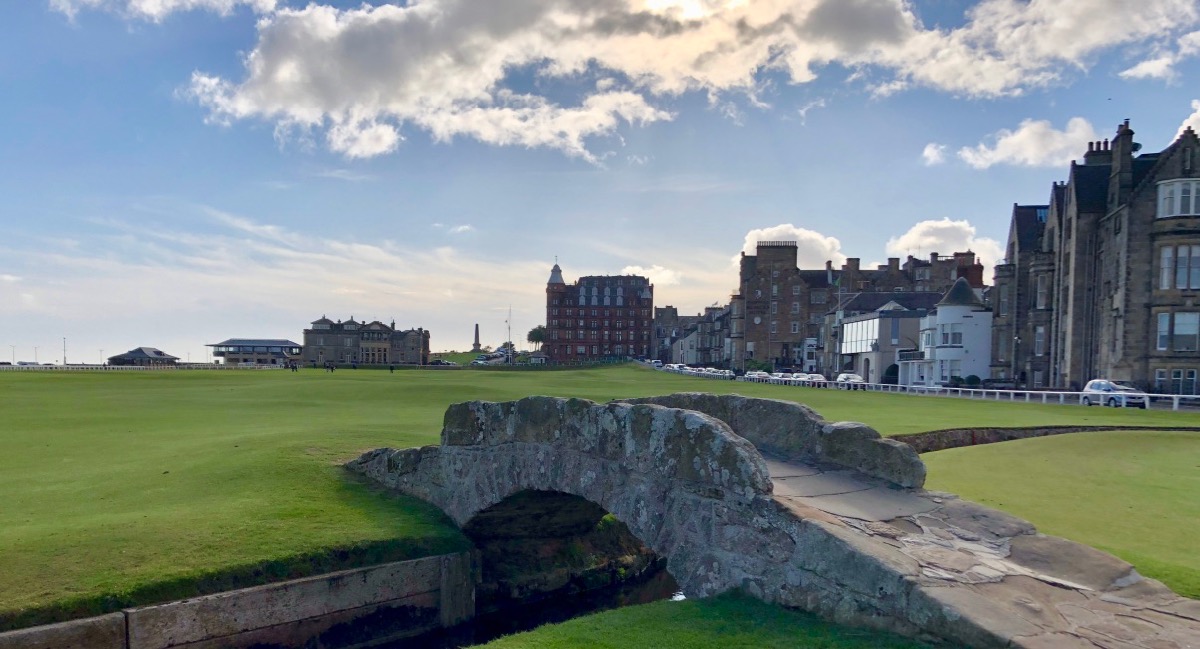 The Old Course has much to commend it.

It is not the most picturesque course, but despite it’s age it is still a testing championship course.

Most of today’s successful designers have been influenced by the design strategies the Old Course displays.

Depending on conditions TOC allows golfers to play target golf carrying the ball to the green as they do at home, but also rewards those that can show skills with the running ball.

It is an intriguing course and one worth multiple plays.

I am not sure you could ever master it, but the joy is in the journey..

The Old Course is a Travelling Golfer must play!