King in the North

Golf was recorded as played in Dornoch as early as 1616, but the Dornoch Golf Club was not founded until 1877 when Old Tom Morris was commissioned to design 9 holes, and then another 9 three years later.

Word of the course spread quickly around the world, and in 1906 the club was awarded 'Royal' status.

Old Tom fashioned one of the classic links at Dornoch, and although 4 holes were added at the Embo end of the course after 4 from the original course were lost to the war, the course remains remarkably true to his original layout.

Royal Dornoch has never hosted an Open championship, and probably never will, due to the remoteness of its location on the Moray Firth, and the lack of infrastructure in the small town itself.

Nevertheless many a good judge rates Dornoch the best of all the links courses. Tom Watson, and Ben Crenshaw are two such gentlemen who really know their golf and yet go out of their way to sing the praises of Dornoch.

And let us not forget Donald Ross, the most prolific golf course architect in history- he was involved in building over 400 courses including masterpieces such as Seminole and Pinehurst no 2.

Ross began his career as green keeper at Dornoch before heading to the USA and ultimately creating all those courses.

Ross constantly drew on Dornoch as the model he would follow in coming up with his designs.

These days every aspiring golf architect, or golf affecianado wants to make the pilgrimage to play his inspiration.

Indeed most world course ratings these days include Royal Dornoch in the world top 20, and some higher.

So how good is it?

The answer is very good, but top 20 in the world is pretty heady stuff! 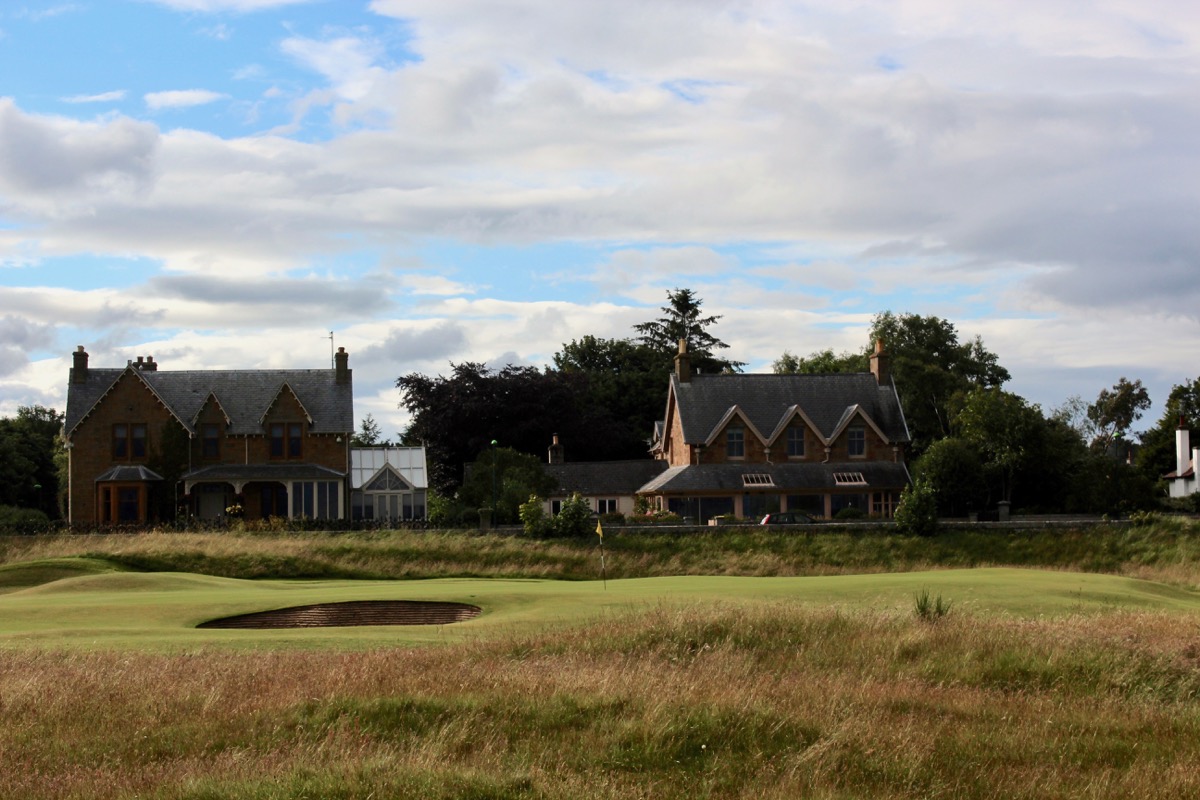 I last played Dornoch 17 years ago, and although I liked it, I didn't rate it quite as highly as many do.

So I was keen to return, and reassess.

The town of Dornoch is lovely and has real character, and we stayed at the Royal Golf Hotel, adjacent to the course.

It is nicely appointed, and a very pleasant and convenient place to stay.

Playing the second time, I recalled most of the holes, and was struck by the sheer joy of playing on a classic links course, with wonderful turf on fairways and greens, many of the greens being raised and relatively uncomplicated.

You will soon find that hitting a crisp high iron to these greens often results in heartache.

With the inevitable 2 or 3 club zephyr coming in off the firth, Dornoch sets a test many will fail. 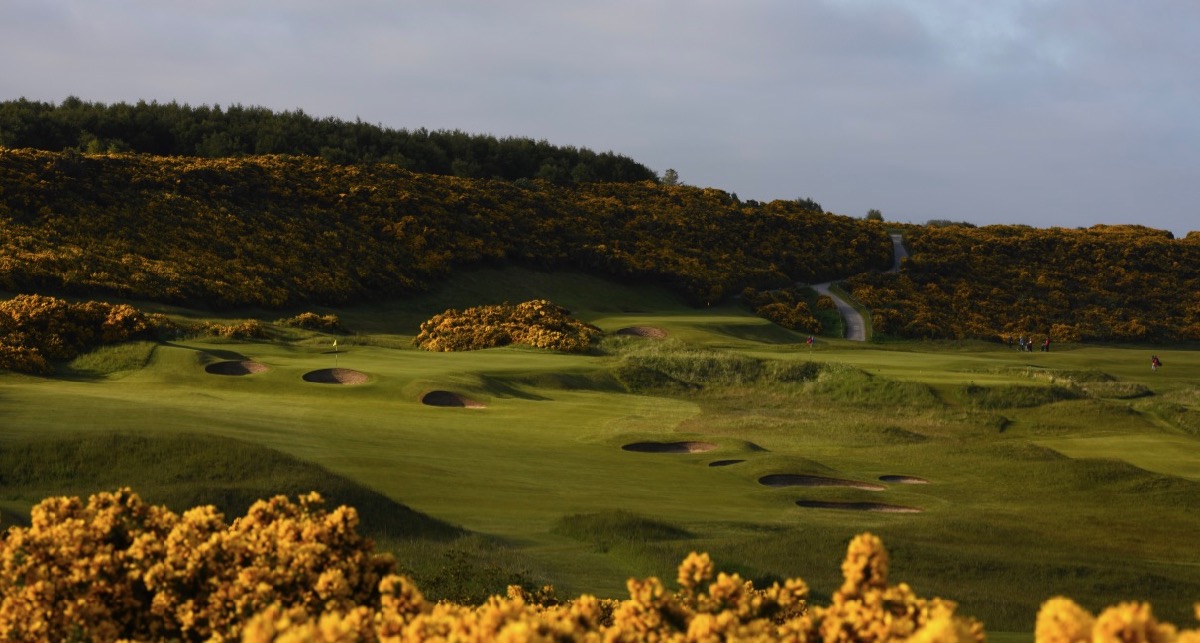 As an experienced links golfer, I expected to do better, but simply did not make the correct club and shot selections required to post a score.

I hit the ball well and got beaten up by Dornoch in a light wind...

So I want to go back and try again, and reassess the merits of this intriguing course.

I think there are some very fine holes.

The first is a simple short opener, but has appeal nonetheless. The par 3 second is a cracker hole with narrow sloping green, and matching bunkers threatening at the front.

In fact all of the one shotters were good holes. 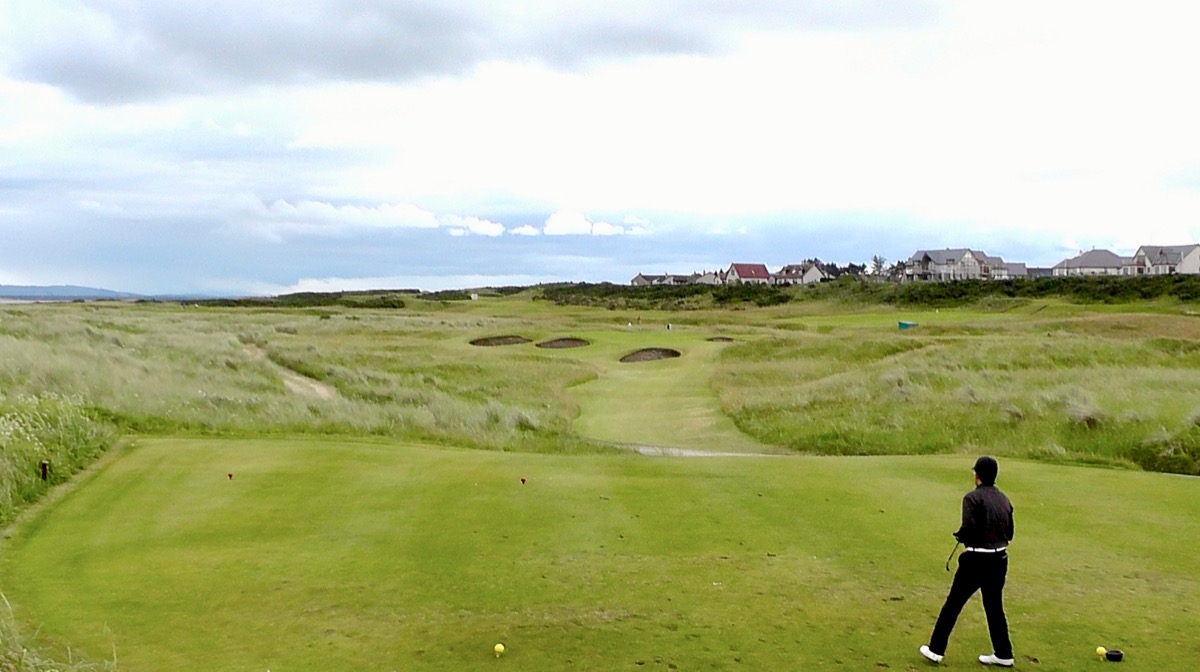 Hole fourteen, known as 'foxy' is the signature hole, and is a difficult long 4 with no bunkers, but protected by natural mounds and a raised green which is very hard to hit (see pic top of page).

I particularly liked the par 4 seventeenth as well with its interesting green lying well below and over the hill from the teeing ground.

On the downside however I thought 16 and 18 a tad bland..

So now that I have played Dornoch twice I know it is a very good course.

Top twenty in the world?

Personally I don't think so, but the course has me intrigued more than just about any other I can name...

I need to play it a number of times, hoping that I make better choices when I do

Hopefully sooner rather than later!