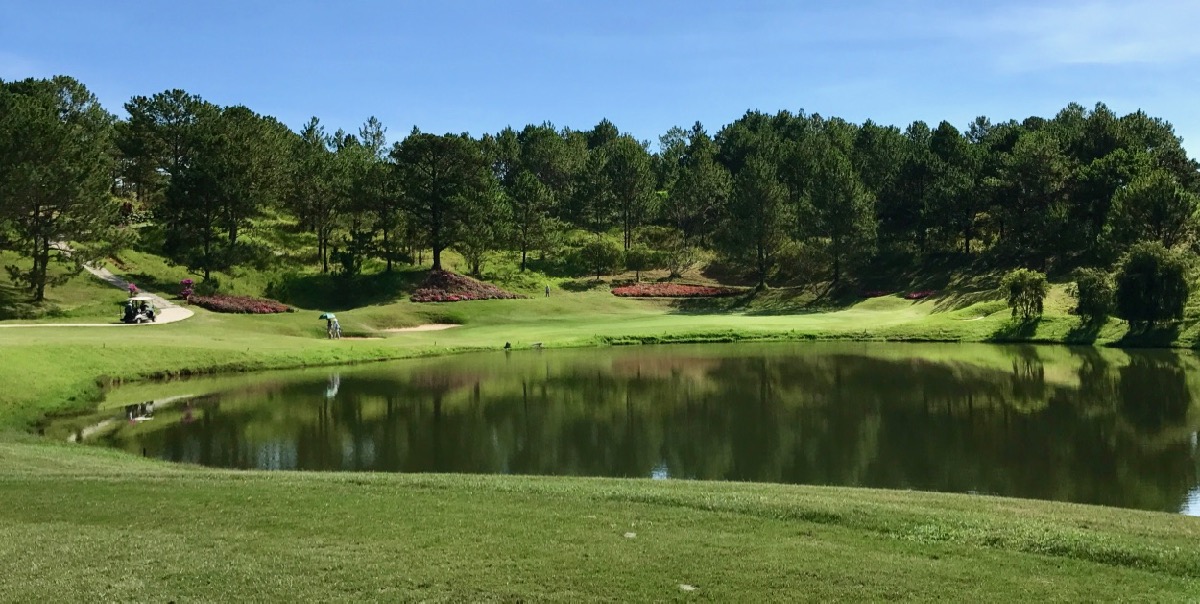 The course has a colourful history as has the city of flowers (Dalat City) where it is situated.

Emperor Bao Dai returned from France to his residence in Dalat in the 1930’s, and took a personal interest in the course- which started out as a 6 hole Colt/Alison design.

However the course was abandoned in 1945 when the Emperor departed to Hong Kong.

But with the reunification of Vietnam hard times returned, and the course was closed again in 1975.

It was not until 1994 that American Larry Hillblom stepped in to again restore the course- this time an eighteen hole renovation by IMG/ Brett Stenson.

Since then Dalat Palace GC has generally been regarded as one of the best courses in Vietnam. 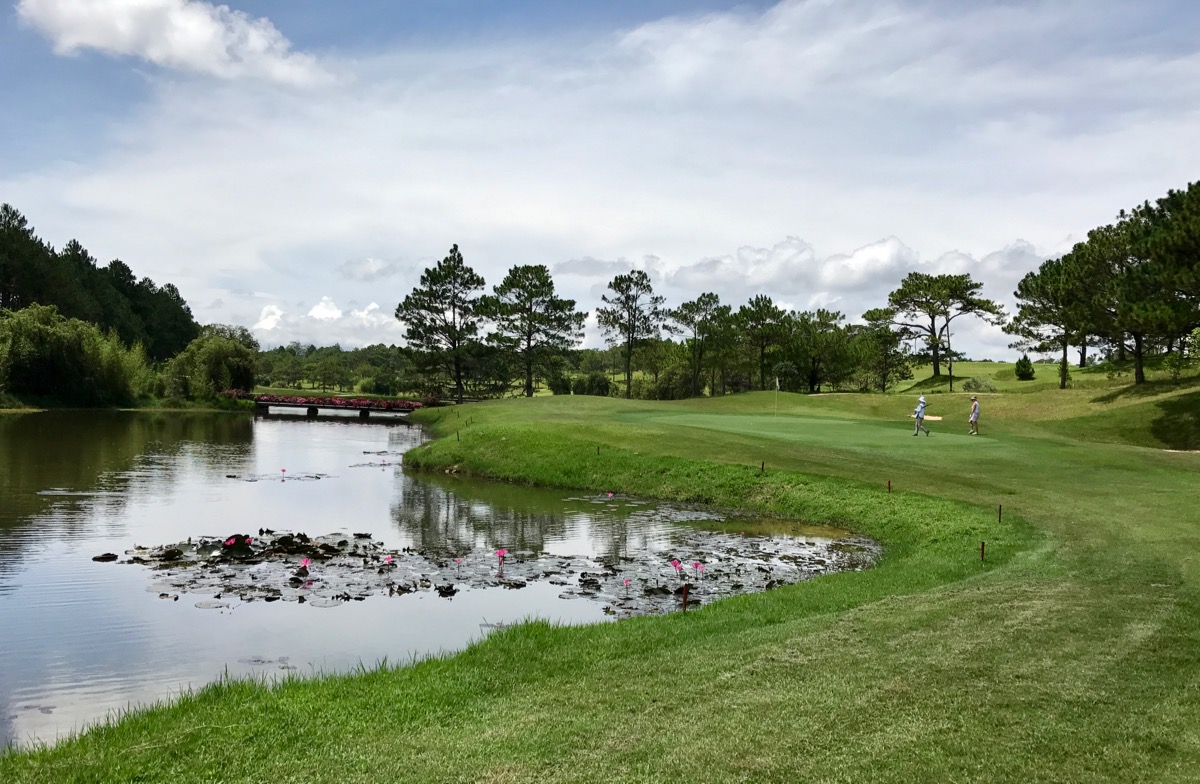 Dalat is located at 1500 metres above sea level, and as a result has an average annual temperature that is pleasantly cool compared to other areas in Vietnam.

And it is well positioned for golf too, allowing bent grass greens and fairways at Dalat Palace GC- something that just is not possible in the warmer climates.

The course at Dalat Palace GC is sited virtually in the centre of the town on undulating terrain which features mature pine trees and a number of water hazards.

The fairways are wide, and the greens are large, so the course is seen to be suitable for the resort golfer as well as the private members..

But the many water carries and elevated greens will test even the more skilled golfers..

The course is not so well suited to walkers as some of the distances between green and tee are lengthy..
This may be a reflection of the chequered design history of the course and how it evolved over the years.

The site is a little hilly, but is still a pleasant walk, albeit a long one! (carts are available)

Golfers will remember the many water carry holes at Dalat Palace as the main ‘feature’ of the course. There are quite a number of par 4 holes with tee shots to fairways framed by pine trees, followed by an approach shot over water to an elevated green.

There is no doubt this adds some challenge to the round, and looks wonderful, but it does become a little repetitious..

None of them are memorable, but all are solid golf holes.

With the constant use of water in front of greens, the mature pines framing the holes, colour of the various flowering shrubs, and rolling terrain the course at times had a Vietnam meets Japan meets Augusta National feel.

That’s not a bad thing! 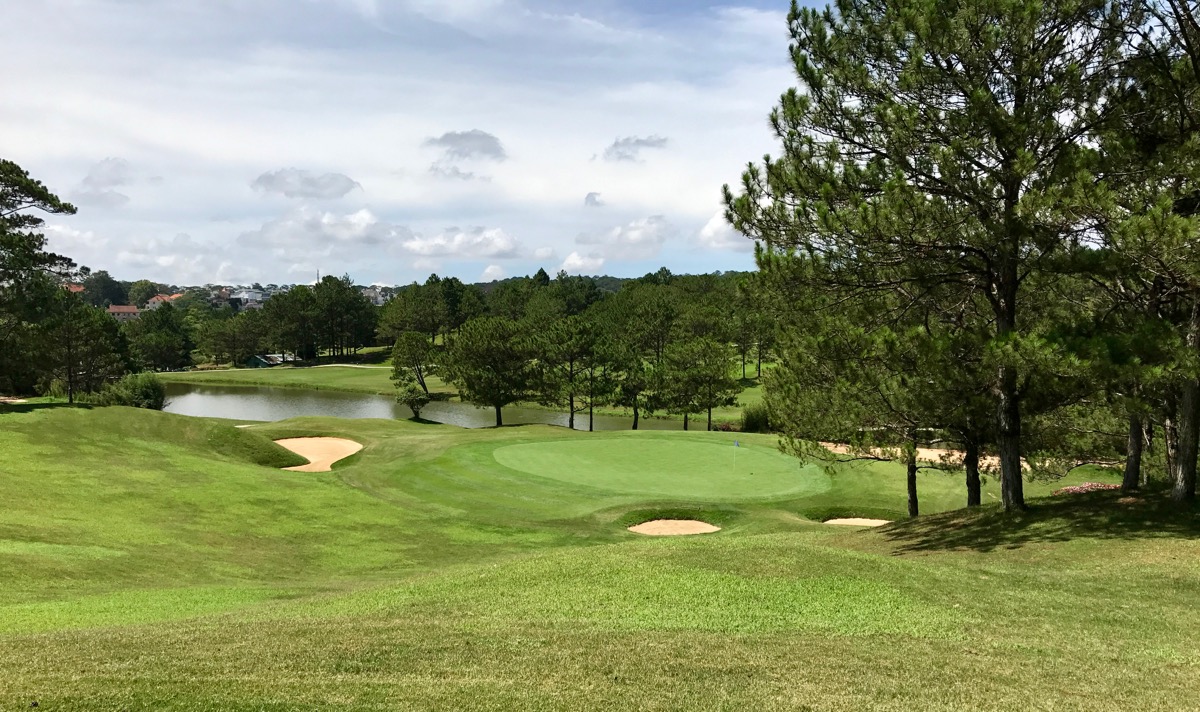 When we visited Dalat Palace GC in May there had been no rain for several days, but the bent grass greens were just a little heavy, and the fairways would have to have been the longest I have ever played on- for a world class course.

Visitors would do well to plan to avoid the wet season here!

Dalat is an interesting place to visit for a few days, and now boasts 3 pretty decent courses with The Dalat at 1200, and Sacom GC now also boasting 18 holes.

Dalat Palace is a world class course and Dalat is a unique destination.

The Travelling Golfer can tailor a golf trip to Vietnam to suit your group.