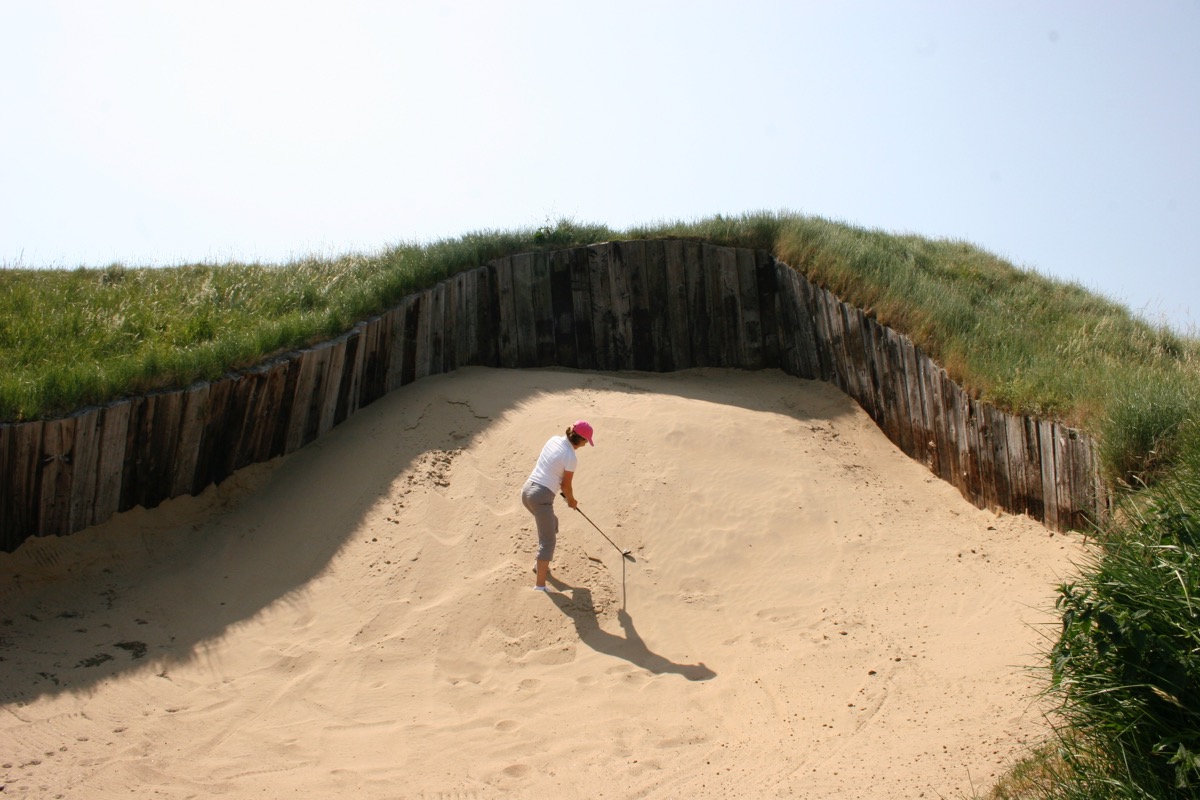 Now That's a Hazard!- Bunkering at Royal St Georges GC- hole 4
Now this is a championship golf course!
When I first played Sandwich in mid 2010, it was in preparation for the 2011 Open Championship. The course was in great shape with the rough starting to look dangerous, and all playing surfaces in great shape .
It is a course built on a grand scale, and I cannot imagine a better site for an Open.
The R & A were on their way to inspect as we played , with preparations well advance for the year ahead .

Royal St Georges GC
Set out by Dr Laidlaw Purves in 188 , Royal St Georges (Sandwich) has been the site for the Open fourteen times, including Greg Norman's wonderful performance in 1993. It will also host in 2020.
My impression was that there was a lot more movement in the fairways than many links courses - the fairways really buck and roll, and the ball skittles about - you can get some ripper lies!
And it was quite a challenge to find a fairway to hit to when on the tee-with semi blind tee shots- there were glimpses but you could never be sure! 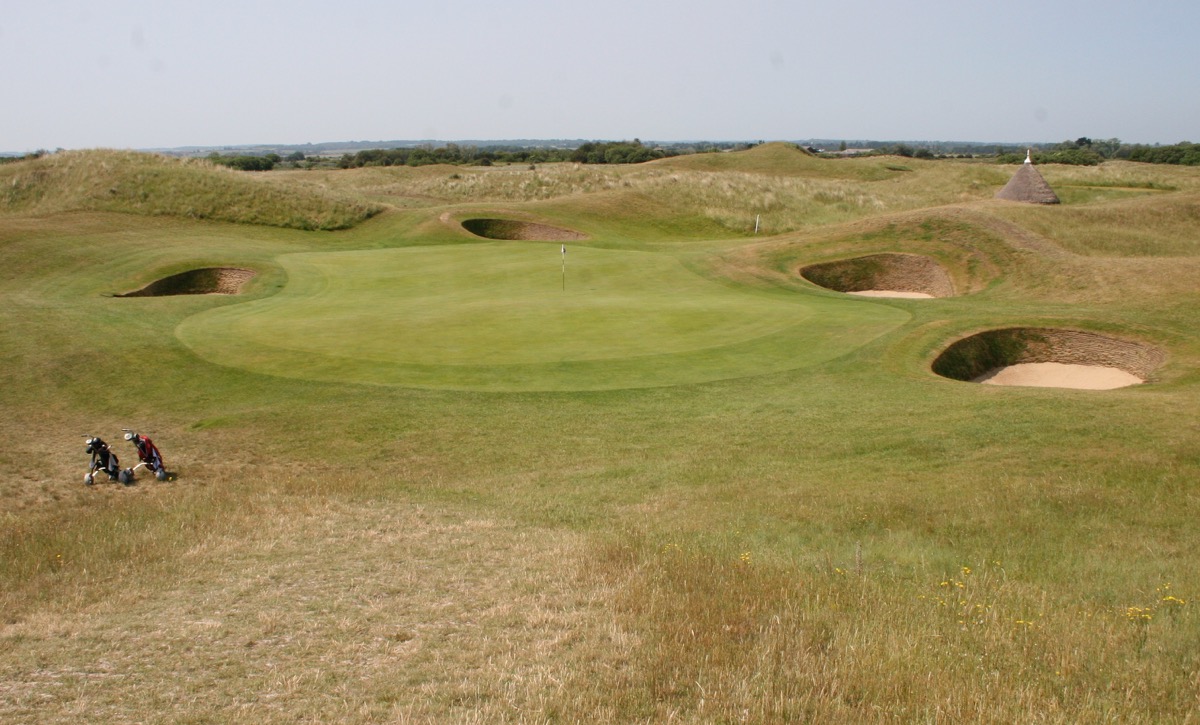 Did I mention I really liked this course?
It has some magnificent short 4's- tight and tricky
Wonderful par 3- all lengths, and very good green complexes
Lots of bunkers- very, very deep bunkers, and long rough if you miss. 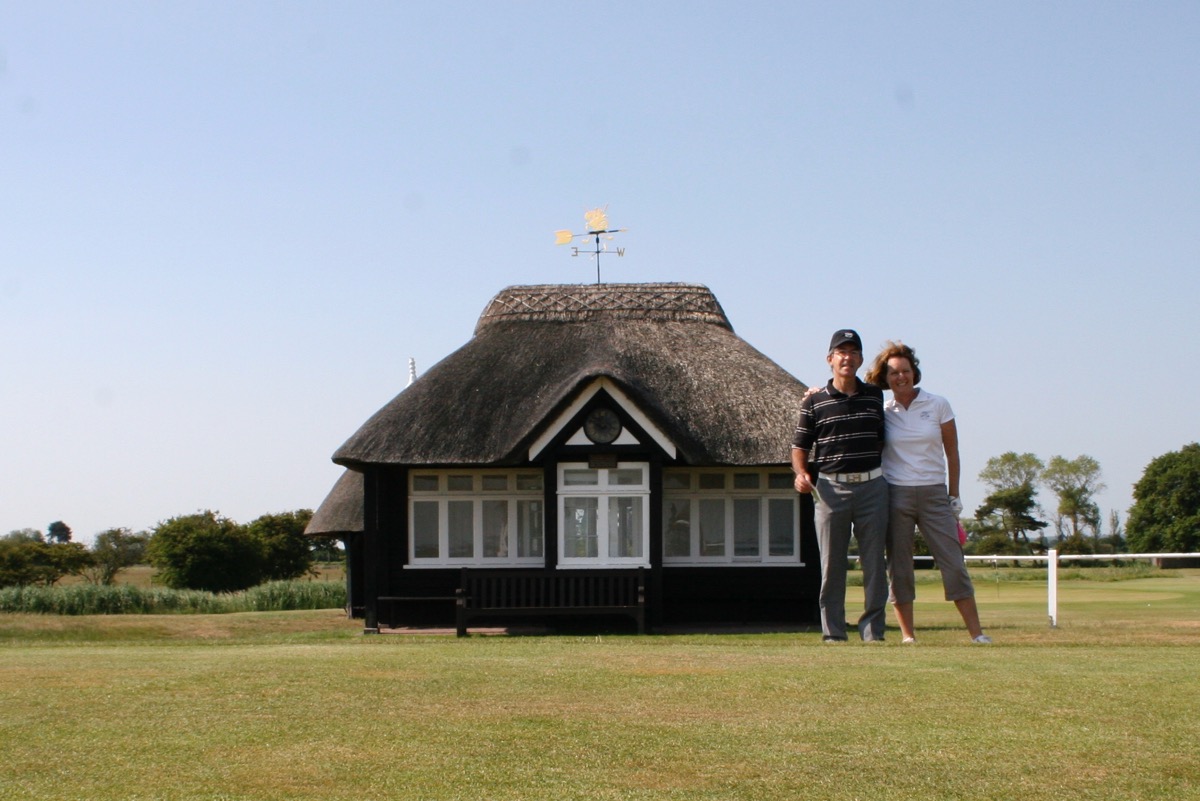 The Starters Hut at Royal St Georges GC
Caution: This is not a course to play off the championship tees in the wind, unless you have serious game!
We played of the members competition tees, and I played really well
While I was hitting fairways, and decent shots to the green it was all very playable - I was 2 under through 8.....but as the game progressed it was the inevitable misses that became more memorable- I played career golf to make bogey, bogey, par on 9, 10, & 11 when I missed my approaches, and was deflected into very difficult territory .
Sandwich does that - hit to the right spot and apparently there are not even too many blind shots - but hit to the wrong position, or miss a green and you are in serious trouble.
Notable holes include the stretch 4, 5 & 6.
Four is a strong par 4 with an enormous bunker in play off the tee. The Elysian Fields is the name of the fairways past the bunker that all golfers seek...
Hole 5 is a long par 4 playing between the dunes toward the sea. The second shot must negotiate a seemingly very narrow gap between dunes to approach the green.
The par 3 sixth is a classic links golf short hole- it sits up proudly surrounded by a ring of bunkers, and in the wind will test your club selection, ball flight and your mettle.

Miss the approach, pay the penalty!- Royal St Georges GC
This course tests your game in all respects- your driving has to be accurate, and you have to plot your way around the course, hit greens, for you will be penalised if you miss in the wrong spots
I thought it was fantastic
Too tough for me - I probably played one of my better games, but a double on 15 had me settling for 73
If you ever get the chance, you must play Royal St Georges
Golf Tours
The Travelling Golfer can tailor a golf tour to suit your group. See  Destinations for itinerary suggestions. Note also that Royal St Georges is played as part of the epic Open Rota Tours, which play each of the current Open Championships courses in a tournament.
Enquiries
For further information please enquire here