Sand Hills is a very private Country Club located in the vast sandhills of Mullen, Nebraska.

It opened in 1995 and has consistently been ranked in the top courses in the world.

The sandhills of Nebraska cover over 19,000 square miles of sandy plains that were orginally an ancient sea bed. This vast sandy wilderness is not particularly suited to farming but it is perfect for golf and Dick Youngscap recognised this.  His decision to buy acreage to develop Sand Hills Golf Club was a game changer in the modern era. The location for Sand Hills was remote with no surrounding infrastructure, and the extreme weather would limit its opening times each year (the extremes of winter close the course for up to 8 months each year). Youngscap asked Coore & Crenshaw to design a low cost, traditional style course sympathetic to the land it occupied. This they did and Sand Hills GC opened in 1995. 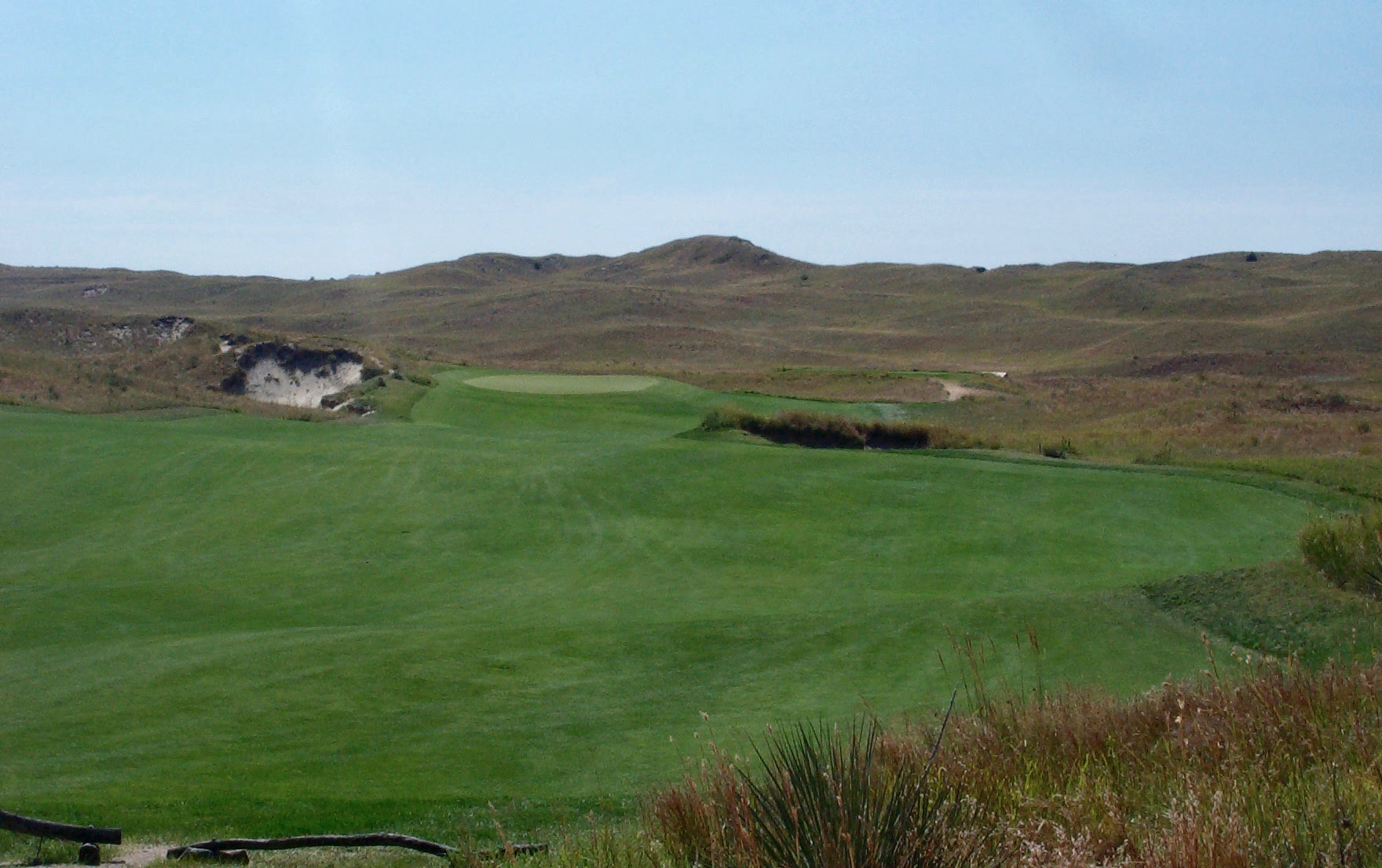 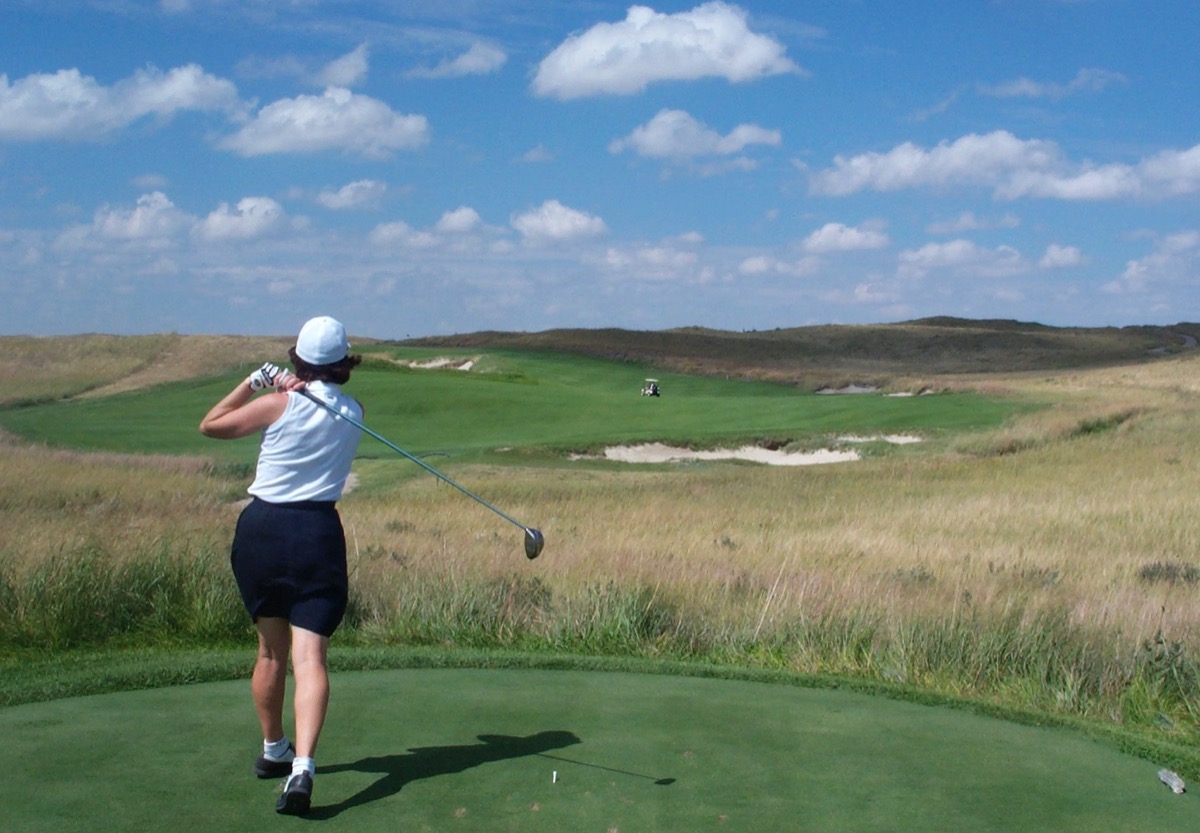 The architects Coore & Crenshaw, along with Tom Doak, have been instrumental in producing minimalist designs in the most natural of settings. Although both parties learnt the mechanics of building golf courses while working with Pete Dye, their designs are more influenced by MacKenzie, Ross & Tillinghast, and the courses built in the Golden Age of Architecture (1910-1937).

Youngscap's concept of building a golf course in a remote setting and designing a "minimalist natural style" course, has made a significant impact on golf course developments going forward.

The development of Sand Hills could certainly be regarded as a marker in what will be considered the coming of a Second Golden Age of Golf Course Architecture.

It is well known that Coore & Crenshaw identified over 130 possible golf holes on the property and took their time whittling this down to a cohesive 18 hole layout.

Sand Hills is a big property. The clubhouse and accommodation are tucked down near a gorge so that it is protected from the winds, especially when it is shutdown through the winter months.

The golf course is a mile distant from the clubhouse, but the driving range and then the putting green are stopping points along the way to the course.

The course itself has a nine out, nine in configuration with the only infrastructure being a modest foodstop called Ben's Porch which overlooks the 18th green. 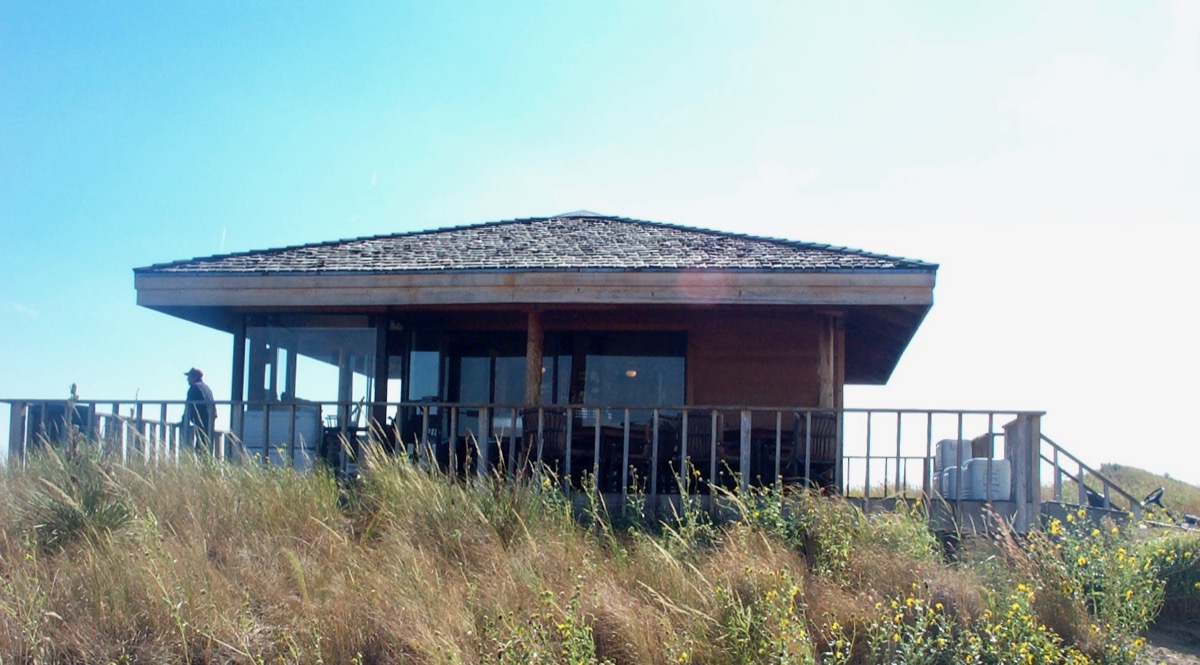 My initial impressions of Sand Hills were of a natural rolling carpet of fairways framed by impressive 'blowout' bunkers and rolling natural dunes, with the purest of green surfaces. The greens were as slick and true as any I have ever played. With the ample movement and the ever present wind, they were both a challenge and a joy to putt on. The putting surfaces were so damn good I was happy to just stay on the practice putting green! 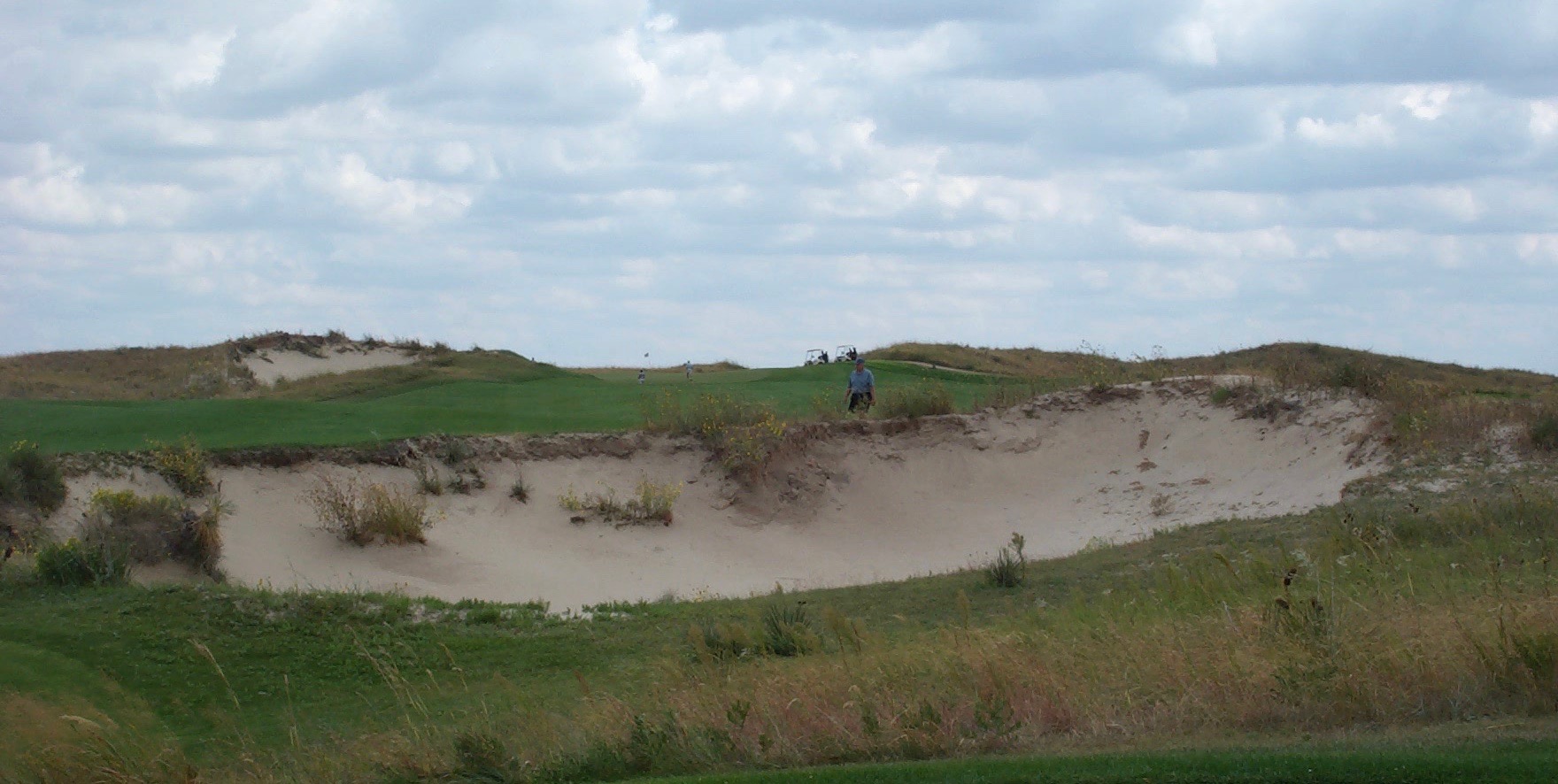 Wind is a factor at Sand Hills as there is nowhere to hide, no trees or mountains to block the breeze. So controlling your flight is a must, particularly on the approach shot. Coore & Crenshaw have provided generous landing areas off the tee to accommodate winds from different directions, and the green entrances are open to allow for a running approach.

Hole 1:  an impressive start, the par 5 first hole is framed by natural blowout bunkers and a gorgeous raised green. 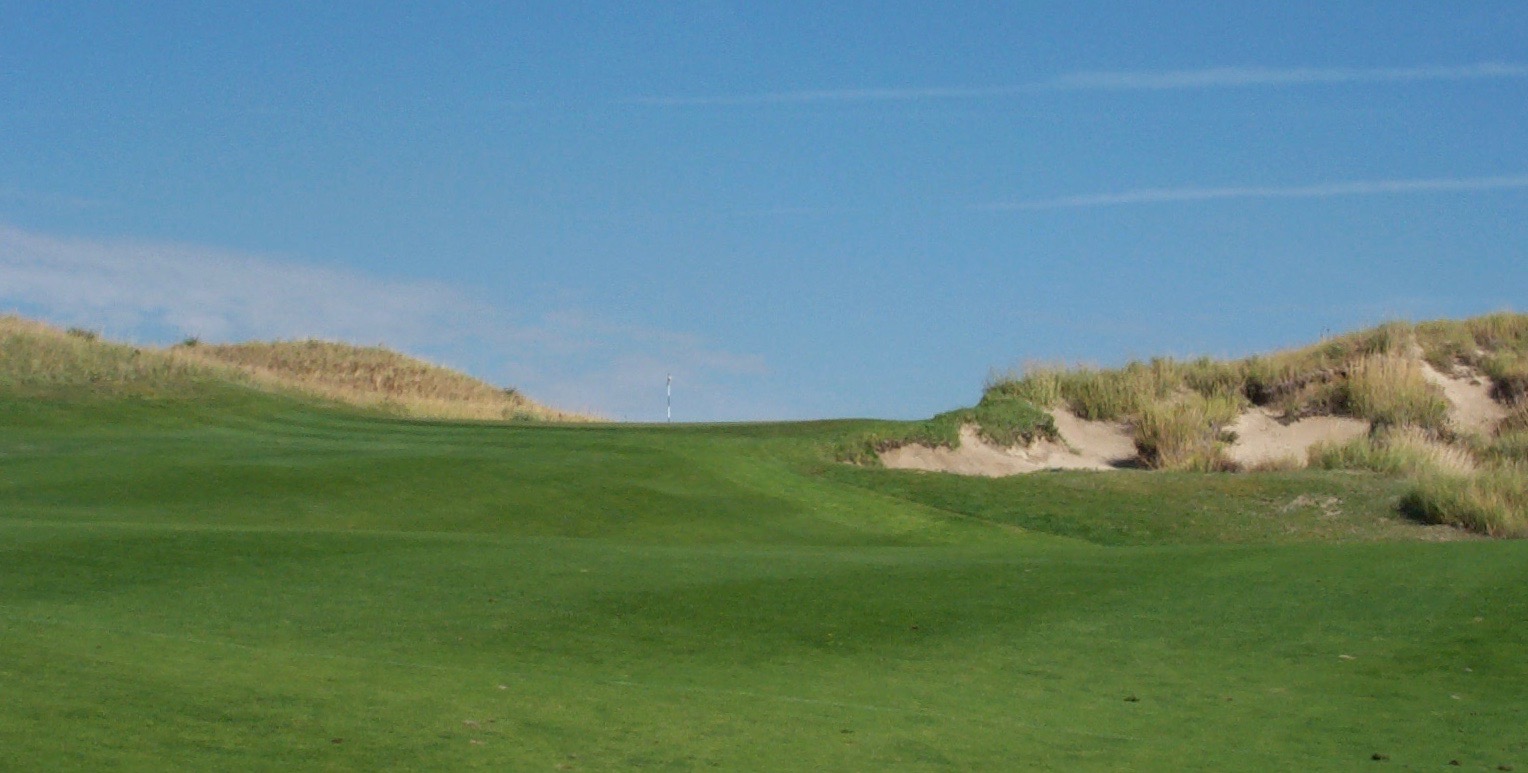 Hole 8: another short par 4 with a unique boomerang shaped green wrapping around a central bunker.

Hole 17: one of the world's best short par 3's! It has a small heavily bunkered green in a sandy wasteland.

The development of Sand Hills has played an important part in golf history, encouraging others to follow their dreams and develop spectacular courses in remote areas of the world. There is no doubt in my mind that these early courses by Tom Doak and Coore & Crenshaw have lead to an ongoing Second Golden Age of Architecture which has has continued now for 25 years..

Sand Hills is one of the best golf courses in the world, consistently regarded as a top 15 course in the world.

And it is great fun to play. We regard Sand Hills GC as a 'Travelling Golfer must play!'

Why we came from Australia to play Sand Hills in 2003

It was 2003, and Heather and myself had won the right to represent the "Links at Port Douglas GC" located in Queensland Australia, at The Clubcorp Team Challenge at Pinehurst Resort in the USA.

As we were also shareholders of the newly formed Links Golf Tasmania, a company building Barnbougle Dunes as designed by Tom Doak, we decided to mix business with pleasure and organised to play a couple of Coore Crenshaw classics courses as well - namely Friars Head and Sand Hills. The idea was to educate ourselves on Coore Crenshaw designed courses in preparation for a second course at Barnbougle. Whilst Barnbougle Dunes was a year off opening we knew we had a wonderful product and Greg Ramsay had always planned on two courses, and who better to build the second course than Coore Crenshaw?

So we arranged to play those two courses and report back to the Board.

Our first stop was New York where we played Friar's Head. It was before the clubhouse was built and the course was new.

As you can imagine, we were very impressed! 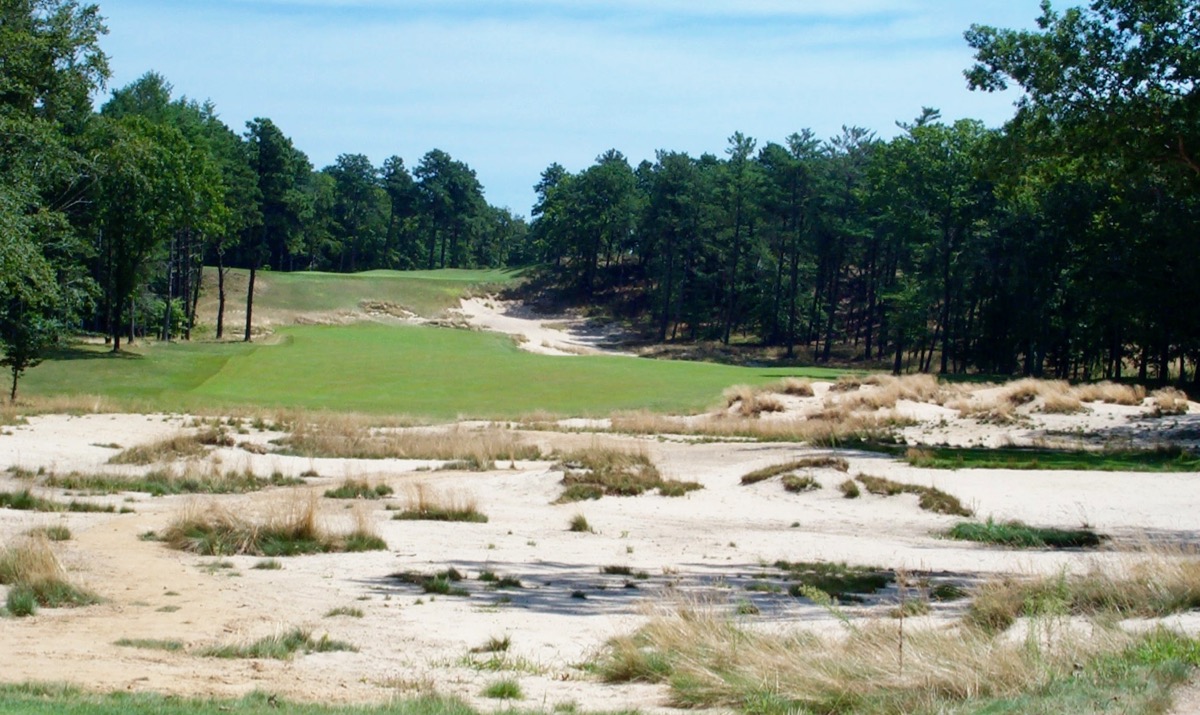 After New York we headed down to North Carolina where we played a game at Tobacco Road before rocking up for the tournament at Pinehurst.  I had read about architect Mike Stranz and his course at Tobacco Road had captured my imagination, so we made a point of stopping in to check it out.

It was quite wonderful and different to anything we had seen. And our son Tim liked it, shooting 65 off the stick from the championship tees!

Then it was on to Pinehurst where teams from all over the world gathered to represent their clubs. We played practice rounds at Pinehurst no 8 and No 7 before the final at Pinehurst No 2.  Playing Pinehurst No.2 was a an amazing experience- it is a championship course which has hosted The U.S. Open and each year since 1901 it has hosted one of the most significant amateur tournaments in the world - the North & South Amateur Championships.

It just so happened that the final of the Clubcorp Team Challenge was on No. 2 on the morning of the final round of the North & South championship. Needless to say the course was in magnificent condition, although the domed greens were just too firm and slick for us real amateurs to handle - but what an experience!! 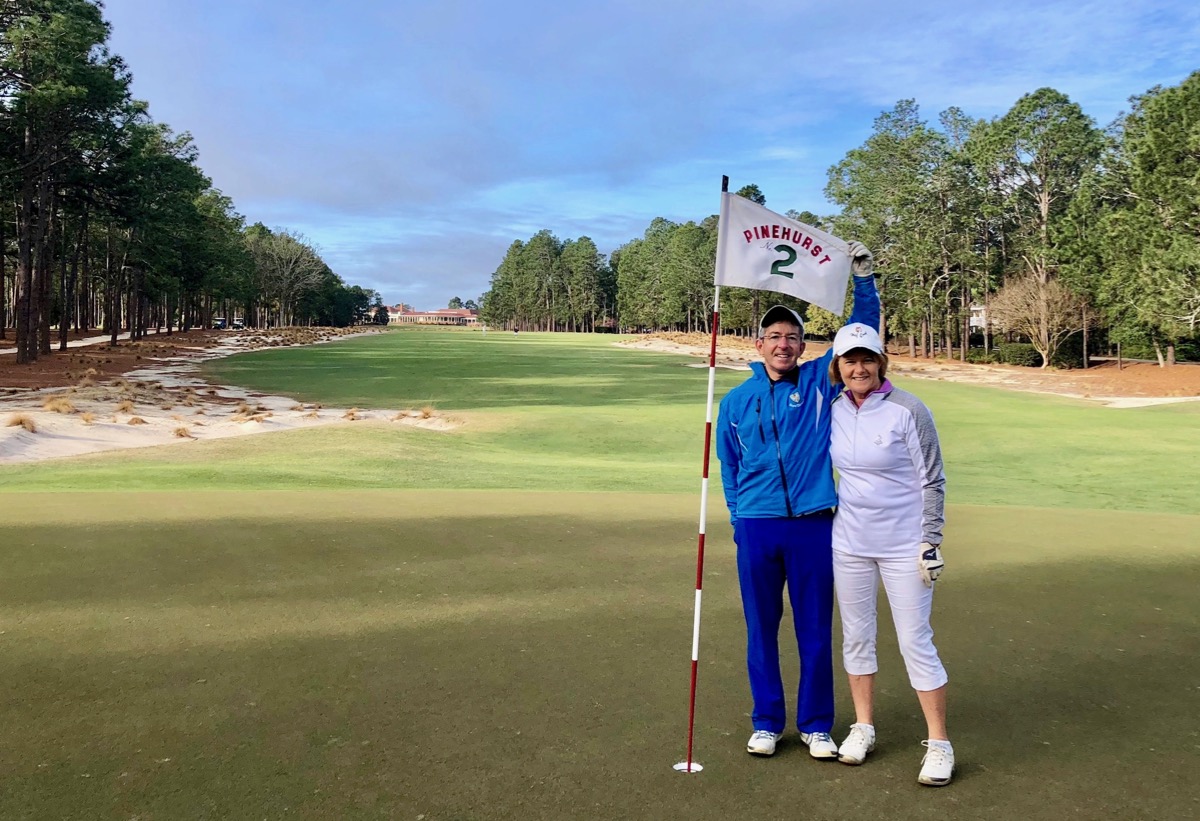 Pinehurst No 2- Heather & Peter on the 18th hole

Tim continued his hot form playing Pinehurst No 8 - he had a putt to go 11 under on the 11th hole when play was abandoned due to lightning.

After Pinehurst we flew from Raleigh-Durham to Columbus and then onto Denver, with a connecting flight to North Platte. Due to flight delays, we missed our connection to North Platte. Unfortunately this resulted in us landing at North Platte airport after dark. Not a good idea when you are trying to find Sand Hills GC for the first time ...

Undeterred by the darkness, we jumped into our car and took off up the highway (NE 97) looking for Sand Hills. The directions were quite specific - turn west at the 55 mile sign - no problem! But it was very dark, and the gate to Sand Hills was certainly not obvious (there was no big welcoming light or gate) so we spent sometime driving up and down NE97 looking for the entrance ...

Just when we were ready to give up (we were seriously starting to think we had made a big mistake ... as if there was a golf course out here in these remote rolling meadow dunes, what a crazy idea), when our headlights caught a distant movement, there seemed to be a car moving out there in the middle of those endless dunes. That was enough for us, we headed down a dirt track through the dunes hoping to find a golf course. We eventually stumbled across the accommodation - hidden from sight - located in a gorge in the middle of the dunes. We were so relieved we had found it! - even though it was getting towards midnight.

Due to the flight delays we had only one day at Sand Hills. We encountered some strong winds but it was an unforgettable experience and certainly worth the effort to get there.

The Travelling Golfer can tailor a golf trip to the USA to suit your group.