The Olympic Club was formed in San Francico in 1860 as an athletics club, and was the first of it's kind in America.

In 1918 the club purchased The Lakeside Country Club, which had been struggling financially.

The course, designed by Wilfred Reid was originally built on a barren hillside overlooking Lake Merced.

On taking ownership The Olympic Club unveiled plans to build a lavish new clubhouse on the site, and to renovate the course and add another to provide 36 holes of golf for members.

The Lake Course took the bulk of it's holes from the former Lakeside Country Club, but was substantially redesigned by Willie Watson and Sam Whiting, re opening in 1924.

In the process the the Lake course was transformed by the planting of trees framing every fairway.

Upon maturity the trees became a dominant feature on the course.

Upon acquiring the Lakeside Country Club and redeveloping The Lake Course, the club also built The Ocean course (which also opened in 1924).

This course was originally known as Pacific Links.

The course opened again for play in 1927.

It was redesigned by Tom Weiskopf in 2000.

The Club also has a remarkable par 3 'executive course'.

Designed by Jay Morrish and Tom Weiskopf in 1994, The Cliffs course has nine holes with sweeping views of the Pacific Ocean.

It covers some remarkable golfing terrain, and is one of THE best short courses anywhere!

All in all, with the magnificent clubhouse and associated facilities, plus three courses, it must be said that Olympic Club members are very well catered for!

Over the years The Lake Course at The Olympic Club has hosted a significant number of state and national championships, including:

The club is also scheduled to host the 2028 PGA Championships and The Ryder Cup in 2033.

The Lake course was originally routed through unremarkable land on the side of a hill overlooking Lake Merced.

Over the years the planting of the trees and a number of redesigns have transformed the course completely.

Fairways are now framed by Cypress Pines, and the course is known to provide more than it's fair share of sloping lies.

Combine this with the small greens (with ample bunker protection) and you have a strong test of golf.

On the plus side not many balls will be lost on the Lake course.

The trees lining the fairways are well pruned, and don't dominate lines of play.

There is ample room for even wayward drivers..

It is not surprising that players will encounter sidehill lies from time to time given the hillside beginnings of the course.

But that is just one factor you have to master to play well here.

Perhaps more of a worry for most is the first cut of rough, which encroaches well inside the treelines and narrows the fairways considerably.

You will find your ball easily enough, but the approach shot is substantially more difficult to gain puchase on, invariably causing approaches to misfire.

I am not sure if this was because of maintenance work in previous weeks, leaving the fairways a little long and soft, but the journey was more about carry than run.

That really tested us on the day.

We didn't get to see the greens at their best given recent tining, but I can imagine they would be a handful when in top shape.

They are relatively small, quick and have enough movement to cause havoc..

And they are stoutly defended (and surrounded) by clusters of high face bunkers.

The green complexes look good, but those bunkers can be deadly.

On the day our group comprised four decent, experienced golfers, and all of us had at least one hole where we had a number of goes of getting out, and eventually picked up.

This may have been because of recent maintenance work- the sand was soft and loose- but is nevertheless unusual.

- hole 6, a long challenging par 4 with an impressively bunkered green

- the long par 3, 13th hole with the raised green surrounded by bunkers and set in a copse of cypress pines 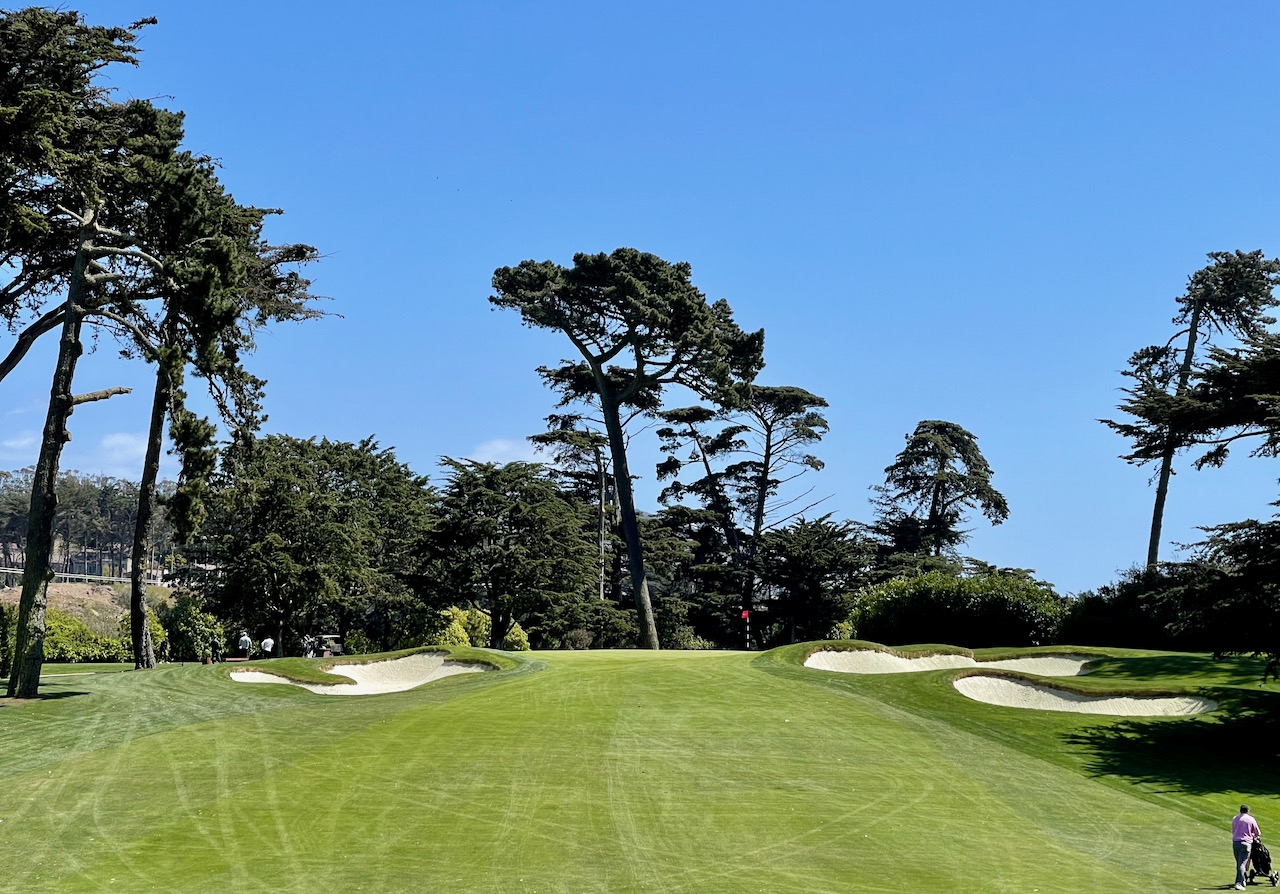 - hole 15, a short par 3 where the smallish green is protected like a fortress by a ring of deep bunkers

- hole 18, a short uphill par 4 that is as picturesque as it is challenging. It's a great finishing hole.(see pic top of page)

I came away a little bit in awe of The Olympic Club.

The course beat me up a bit- there is nowhere to hide if your game is a little off, and I wasn't on song..

But it wasn't tricked up or unfair.

I did not lose a ball. (I don't think any of our group did).

It is a championship course, after all..