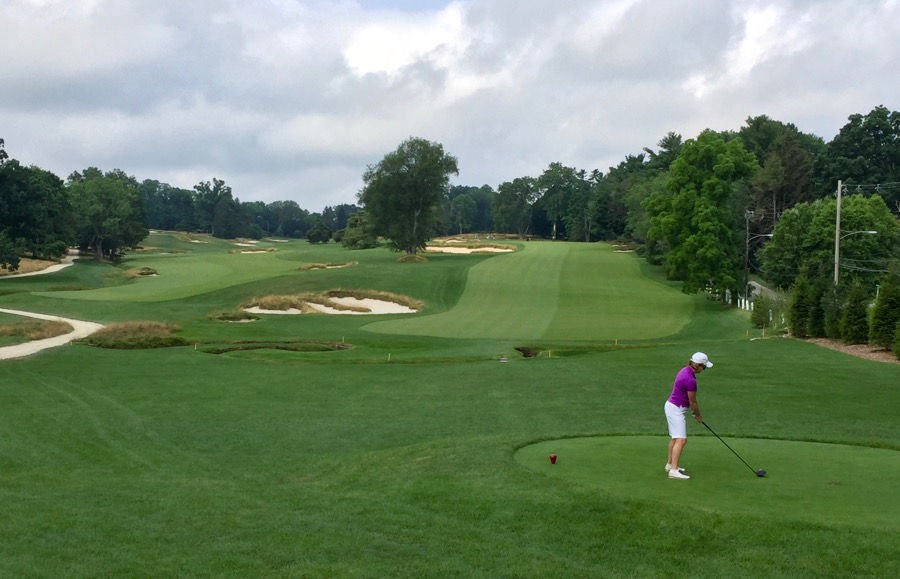 Merion Golf Club is located in Ardmore, a suburb of Philadelphia in the USA.

It was designed by Hugh Wilson, an accomplished amateur golfer and Merion member in charge of the committee overseeing the club's move to a new course. Wilson had never designed a course but embarked on a 6 month study tour of the great links courses in the UK before coming home and helping to create both the East & West courses at Merion. Previously the Merion Cricket Club had included both the tennis and golfing clubs- but with the growth in popularity of golf the 9 hole hole course at the cricket club was outgrown so the Merion Golf Club was formed as a breakaway, and needed their own course.

Wilson's design on the East course was an instant success, but he continued to tinker over a number of years, making changes particularly in relation to where the course crossed the public road. In these changes the famous 13th hole was relocated.

Wilson used great imagination to fully utilise the natural features of the site, and his routing of 16, 17 & 18 over and around the quarry were inspired.

Merion is known to occupy a very small parcel of land, and is not a long course- but it is a championship course in every respect. This was evident at the last U.S. Open held there in 2013 when Justin Rose won with a score of plus 1. Remarkably the course starts off with two par 5's in the first 4 holes- but no more after that. The course is beautifully maintained with long wispy rough in play on every hole. The yawning bunkers that frame the greens have high grass lips, and the green fringes swallow balls which sit well down-  making chipping to the firm and fast greens difficult. When we played the greens were running at 12-13 on the stimp and I found it hard to stop the ball on the green. Inevitably a recovery from the fringe for par was beyond me...

Another oddity at Merion is that the first tee is adjacent to the dining facility meaning that members and their guests are happily munching lunch beside you as you tee off...

Instantly recognisable are the wicker baskets that replace flags at Merion. What you may not realise is that the baskets on the front nine are red, and those on the back nine are a reddish orange... 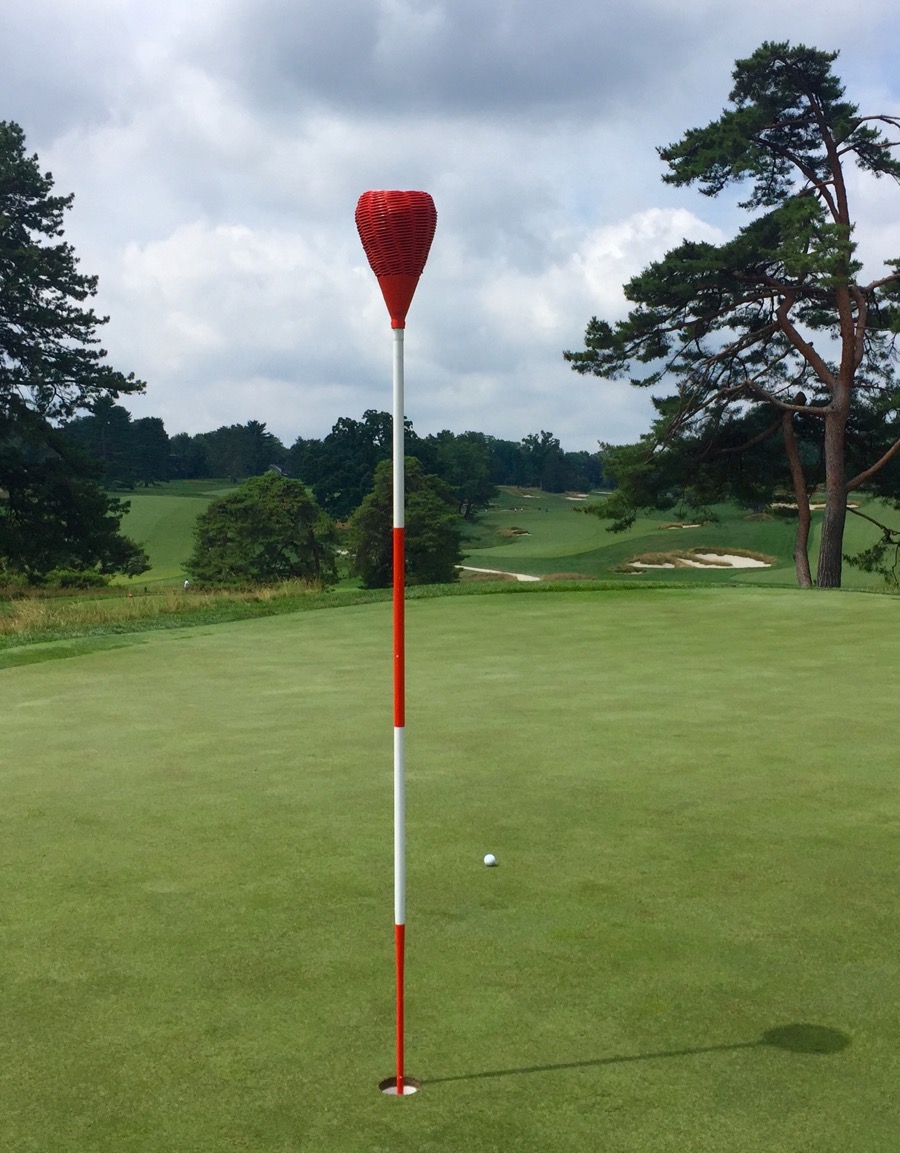 My host for the day described Merion as a three act tragedy:

- the first 6 holes are drama with all six holes being longish, difficult and intimidating

- the final six holes are tragedy- with some of the harder holes in golf sure to bring you undone!

I thought Merion was both unique and magnificent! 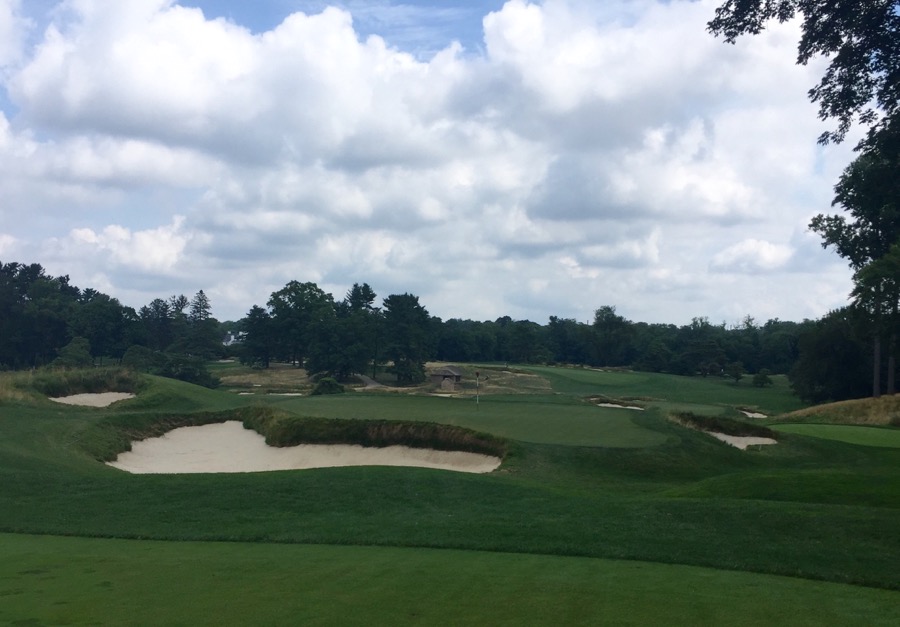 Alos included is the devilish downhill par 3 ninth with bunker and water requiring an accurate mid iron to find and hold the putting surface.

The tenth hole is a short dogleg par 4, reminscent of the 10th hole at Royal Melbourne West. 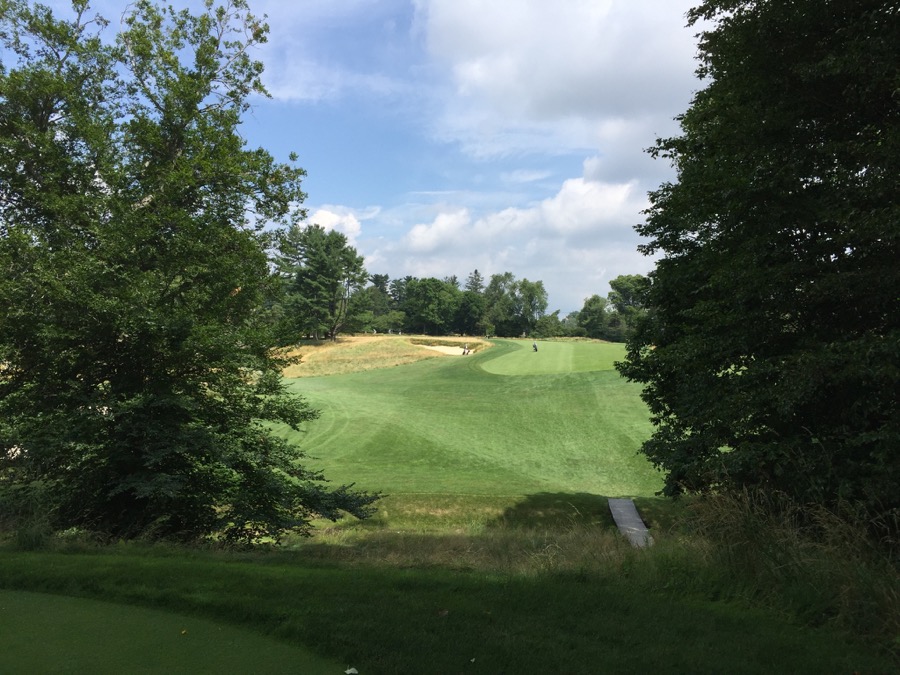 The eleventh hole is a short dogleg left, but the iron shot approach must avoid the burn lapping on the front of the green and bunker left. 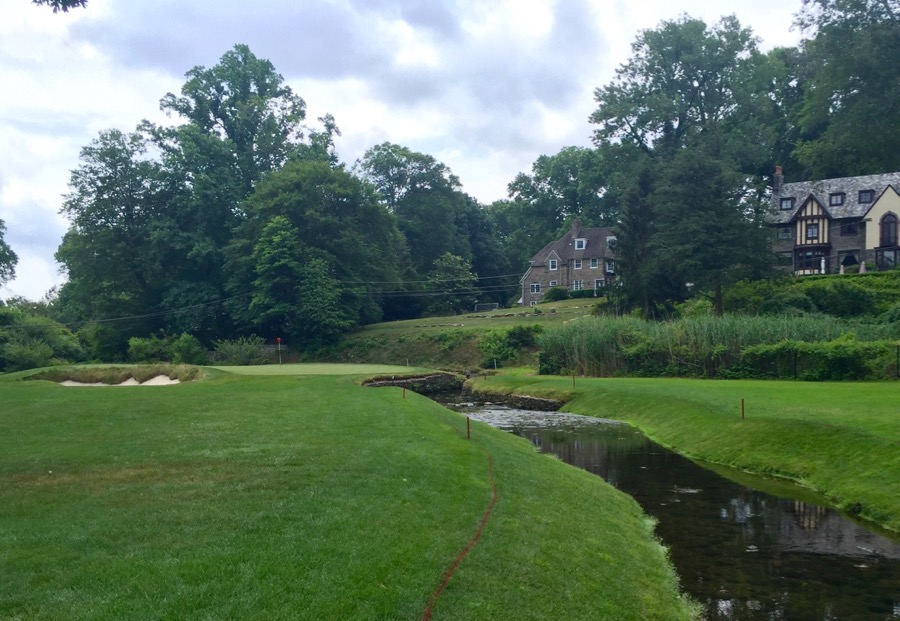 Hole 13 is the famous short par 3 where Phil Mickelson lost the recent open. Surrounded by deep bunkers, and rough- it may be short, but it has teeth!

And then we have the big finish around the famous quarry. Hole 16 is truly dramatic- a long par four with a carry over the quarry the only approach for the long approach. It is really tough, but gorgeous. 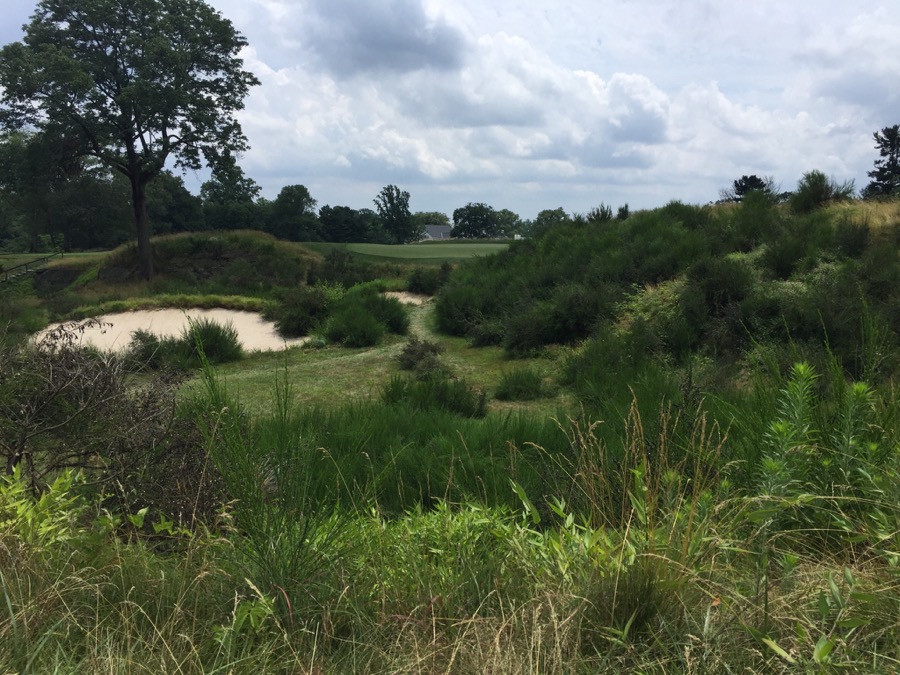 Hole 17 is a long downhill par 3 over the quarry to an ampitheatre green with lots of movement. For me it was a career 3 wood to get it close. What a hole!

The closing longer par 4 carries the quarry again with the tee shot, and is a true championship finish.

Merion is full of history. On the 11th hole you will find a plaque commemorating Bobby Jones winning the 1930 US Amateur- at that stage one of the 'majors'- this winning him 'the grand slam'. 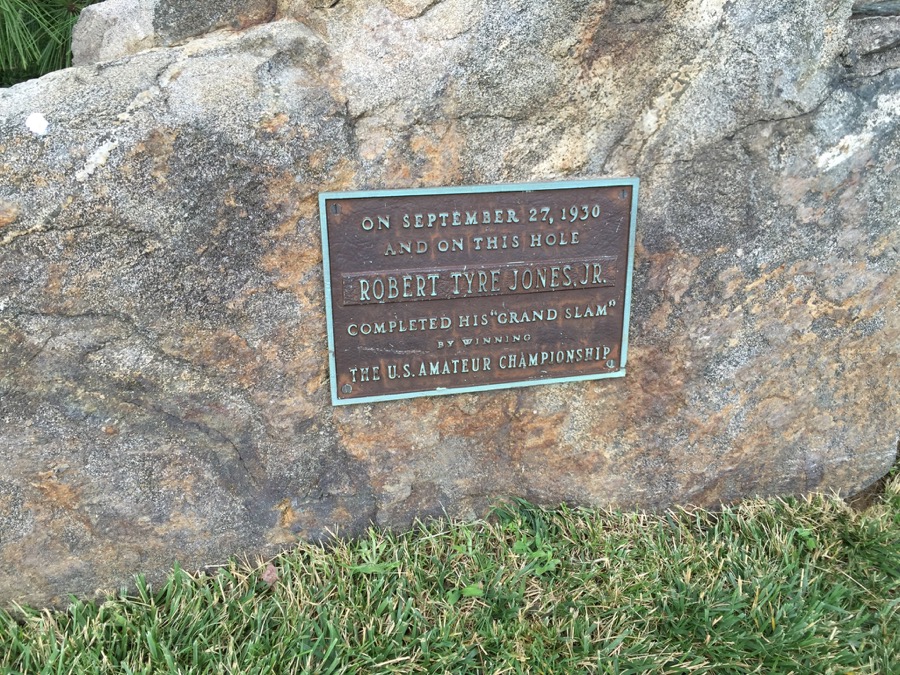 Ben Hogan is also remembered for his feats at Merion. Returning to tournament golf after a near fatal car crash, with his legs painful and completely bandaged, Hogan tied the 1956 Open, and went on to win the playoff. His 1 iron to the 18th hole was caught in perhaps the most famous photo in golf, and a plaque commemorates the spot. 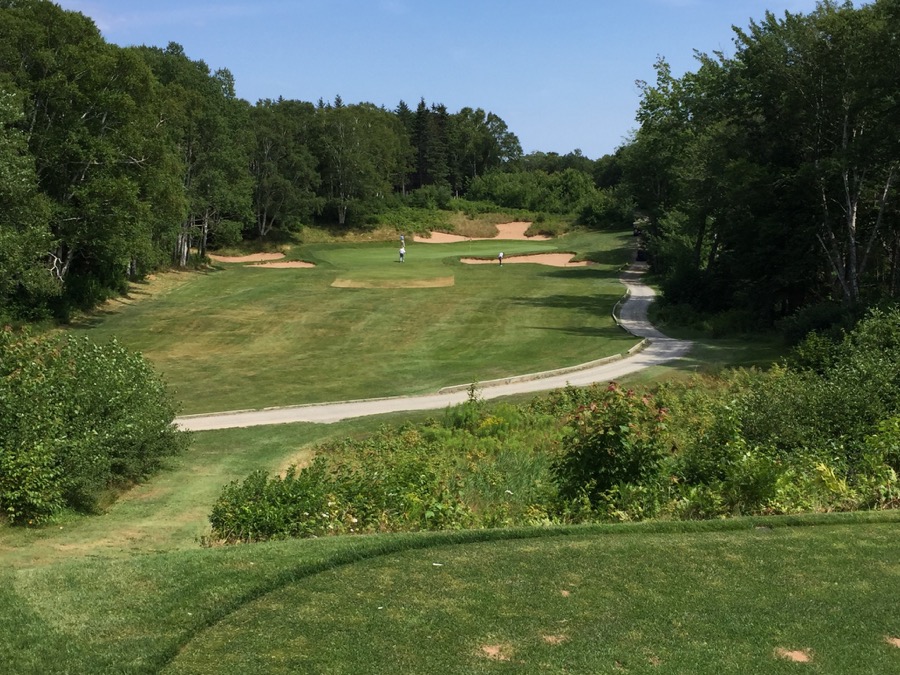 Legend has it that on the first tee when he was about to commence the Open, Hogan's caddy came racing out to announce that he had discovered that there was no 7 iron in the bag. Apparently Hogan coolly replied that he had taken the 7 iron out deliberately because 'there are no 7 iron shots at Merion!'

Other famous Open winners at Merion are Lee Trevino in 1971- who surprised Jack Nicklaus on 1st tee with a rubber snake, and Australian David Graham who played a near perfect round in 1981 to win the title. More recently Justin Rose won in 2013.

Merion is one of THE great golf courses in the world and is rated between 6 and 11 in the world by the various ratings.

It really is magnificent!

Merion is a private club, not available to the general public.