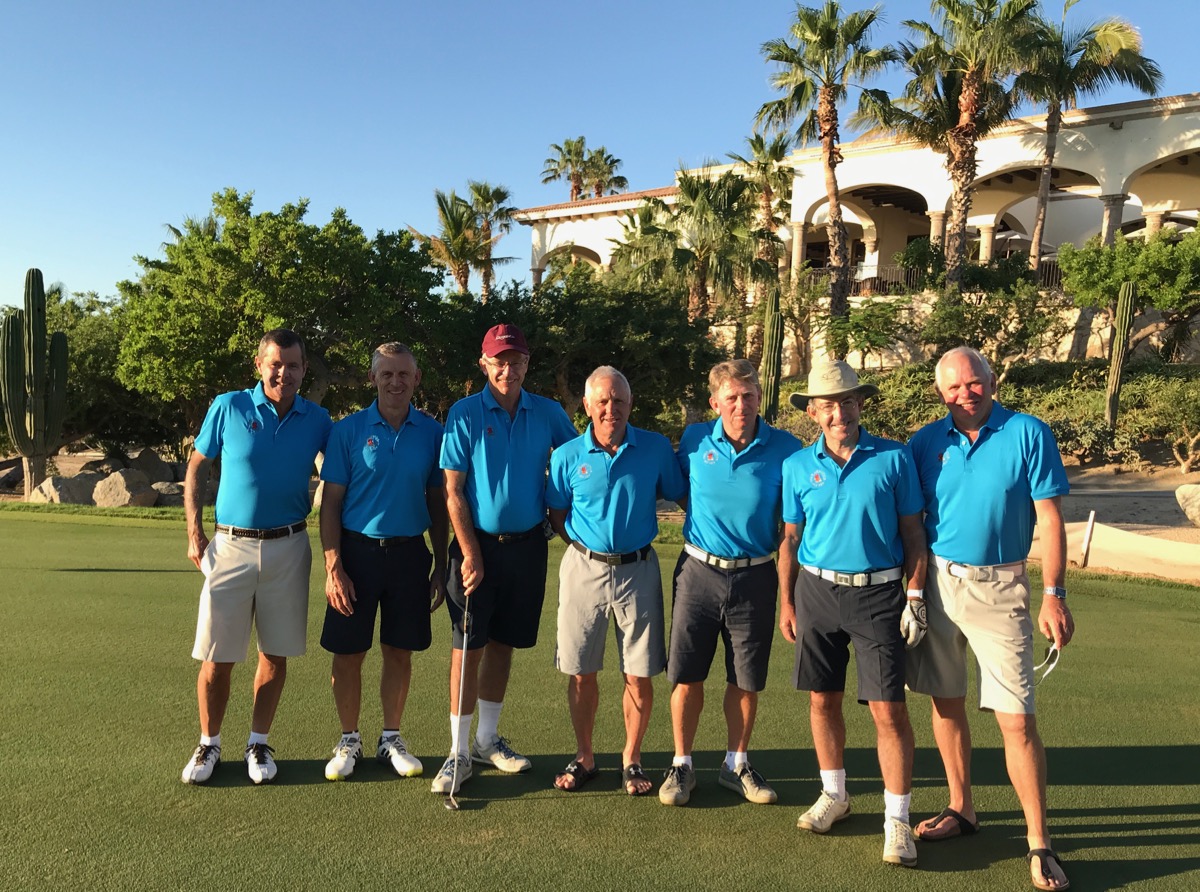 In 2016 the boys voted for Los Cabos for the 2017 trip, but it took many months to get access to the various private courses on our must play list. Having achieved this we were guaranteed a pretty special trip, and I don't think anyone was disappointed...

We all  travelled at different times arriving into LAX and then together down into Mexico on Sunday morning apart from Geoffrey who was pretty clever going in a couple of days early.

Our first stop was the private Diamante Golf Club where we were to stay only one night. Ian took control of the van and it took no time to drive down the brand new freeway to Diamante where we had some time on Sunday afternoon before dinner. Our accommodation was on the lagoon area- which turned out to be very nice for a quick dip, drink and rest....

Diamante is a massive real estate development, with time share apartments, and luxury homes- and two wonderful golf courses- The Dunes Course- rated as high as 36 in the world by some, and El Cardonal designed by Tiger Woods. There is also a par 3 course and a number of our crew decided they really needed to play that before dark. I never did get close to El Cardonal, but Geoff played it prior to our arrival, and rated it highly

On Monday we had an afternoon tee time which gave most a chance to have a relaxed morning- however I obtained permission to discreetly use Louie in the morning, so there I was before dawn out on the 12th and 13th holes take photos and videos. I ended up getting some nice footage of hole 16 & 17 as well- and was back for breakfast before anyone showed 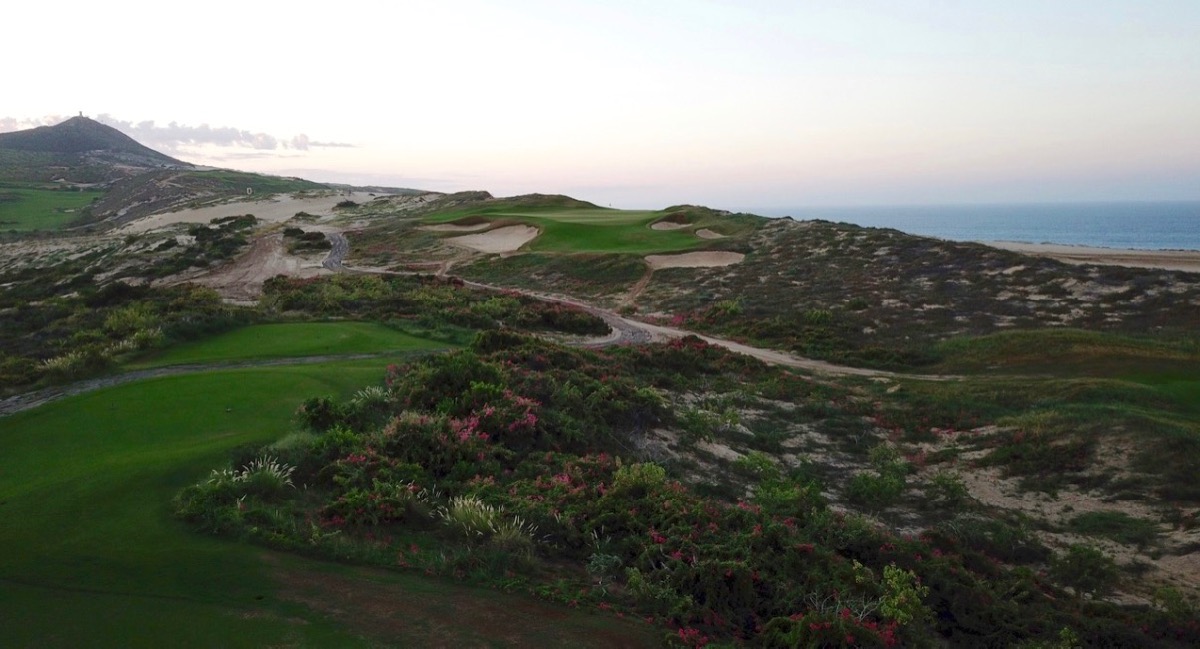 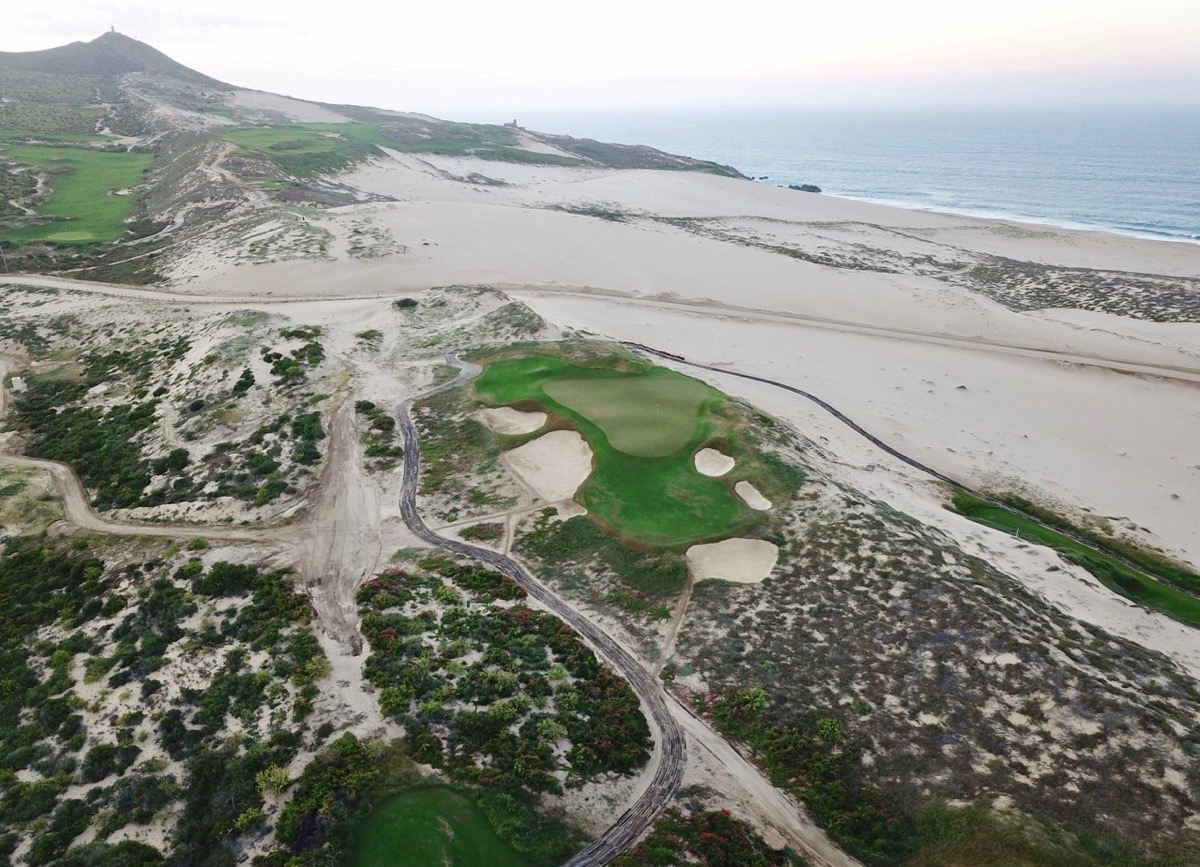 Later in the morning we moved to the practice range where we had music playing, and lunch thrown in as part of the green fee. We all took advantage of the hospitality, and made friends with the locals- an iguana, and a roadrunner! 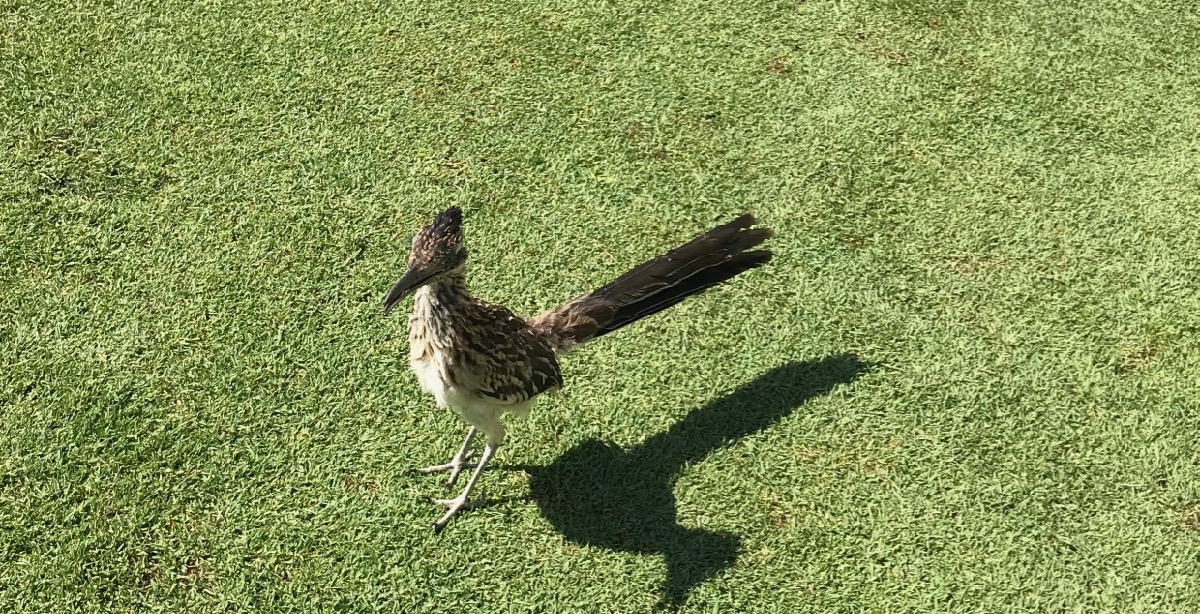 The weather was warmer than we were used to- low 30's and a little humid- but with blue sunny skies, and almost no wind it really was perfect golfing weather.

Diamante Dunes is set in a series of large sand dunes overlooking the Pacific Ocean. It is a wonderful golf course (designed by Davis Love the third) and great fun to play. However I don't regard it as a world top 50 course at this stage. The site around the course is very much a building site, and in my view that detracts from the overall ambience. The holes are often routed through large dunes with impressive tracts of open sand framing them- but I felt the definition of the green complexes themselves got a little lost in these surroundings- perhaps the green side bunkering could have been more visual and tied in with the dunes more? Don't get me wrong- Diamante Dunes is still a world classs course- and hole 12, 13 16 & 17 are quite magical with their proximity to the sea, and the vast beach and dunes surroundings..

After golf we bundled into the van and headed into Cabo San Lucas where we stopped for supplies (who could forget Ian's masterly display of driving in the crazy traffic when he reversed out of a convenience store on the wrong side of the crowded throughfare and turned on a sixpence and threaded his way across the traffic to correct side of the road?)

We stopped for dinner at The Marina and had a nice Mexican meal as we were serenaded by a talented local lady singer. She sang all the right songs for our generation and we loved it.

As the night marched on, we hopped back in the van and headed to Cabo de Sol, where we checked into our accommodation for the rest of the week at the aptly named Sheraton Grand.

The Grand is located right on the beach, so for brekkie we were impressed with the thundering waves and white surf- on a warm sunny day, it's a nice way to get started.

Our golf today was the ultra private Querencia GC, designed by Tom Fazio. In some circles it is regarded the best course in Mexico, and one of the top 100 courses in the world.

Our crew loved the course and had a really good day. Querencia is set back slightly from the ocean and up in the desert mountain terrain. Each hole runs along ridges, and over or around arroyos- and all have wonderful views over the Sea of Cortez. Tom Fazio designs are invariably very visual courses- he uses the splash bunkering, the vibrant colour of the bouganvillea, and the sea backdrop to create a real picture for most holes. But Querencia also has substance, and was strategic. I thought it rewarded the thinking player who was able to position his ball rather than the big hitter. I thought the best holes were the par 4 dogleg third hole with it's lovely green setting, and the par 5 fourth hole with it's dramatic peninsula green. Querencia is a memorable golfing experience and a world class course- I am glad we were able to play there..

On Wednesday we played the Cabo del Sol - Ocean Course. Basically the course plays around our hotel, so it was only a few minutes to get to the clubhouse, and the much needed warm up!!

Originally I had booked to play The Desert Course, but due to storm damage the Desert Course was out of play and we were fortunate to be able to play the Ocean Course twice for the week at discounted green fees. The Ocean Course was designed by Jack Nicklaus in 1994, and has been regarded as one of the top 100 best courses in the world ever since. Many regard The Ocean Course as Jack's 2nd best effort behind only the extraordinary Muirfield Village. With 6 holes on the ocean it is a spectacular course. However what surprised me and I think exceeded my expectations with the Ocean Course was how Jack had used the natural terrain to build his holes, rather than imposing his will on the land. Other than holes 1 & 9 which I would regard as good solid resort holes (which could be anywhere) the course takes you through a variety of terrrains with holes that fit the land and engage you. There is no doubt that the ocean holes, particularly the back to back par 3's at 6 & 7, and the iconic par 3 17th and closing par 4 along the beach are the star attractions. But there are so many good holes- I loved the downhill par 5 fourth hole, and the short strategic third hole as well. The Ocean Course really is a world top 100 course on every level. It is certainly a Travelling Golfer must play!

Dinner back at The Grand was interesting that night as the first of a number of Mexican themed dinners. We sat outside and chose from a selection of Mexican cuisines, and were entertained by local entertainment. It was good fun.

Local entertainment at The Sheraton Grand

On Thursday we drove to Quivira GC- another Jack Nicklaus design which opened in 2014. It is located almost adjacent to Diamante, and is also part of a massive real estate development. The course is private, but I am very grateful that we were able to gain access. A game at Quivira is something you won't forget, mainly due to the incredible holes along 300 foot cliffs. I can't imagine how anyone would consider putting a golf hole where the 5th hole is sited. The land is so steep, and there is so little room for fairways or greens! Who could forget the 3/4 mile commute from the 4th green to the fifth tee? The cart path basically climbs up the mountain face, through switchbacks, over bridges spanning arroyos, and ultimately to a half way house with a view, and some hospitality. And then onto the 5th tee where it takes a whole minute to actually recognise from the tee that  the tiny green patch hanging off the cliff is actually the target green...

The sixth, a mid length par 3 is probably a better golf hole, and also very spectacular, but with a narrow green and exposure to the wind it plays hard.

Perhaps the most famous of the clifftop holes is the par 3 thirteenth hole where a tiny green sits on a ledge above the granite cliffs. It's a short iron, but all carry and with the wind behind it is hard to stop on the green. 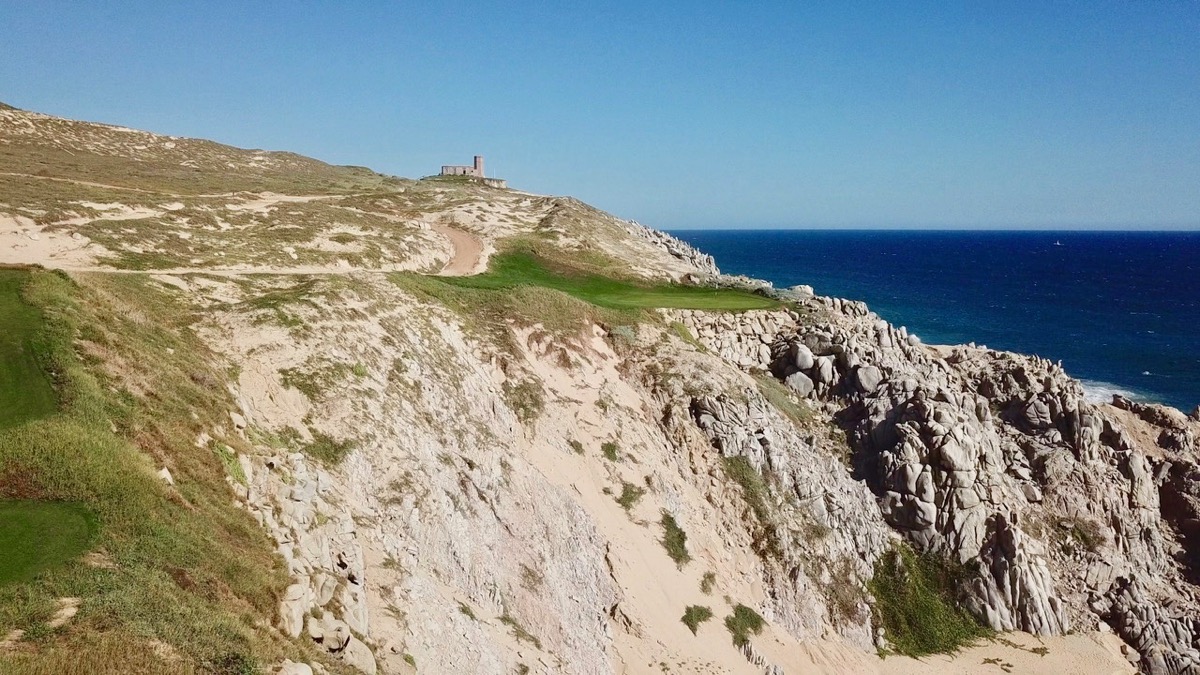 Funnily enough my favourite hole was the short par 4 fourteenth hole- a driveable par 4 with no bunkers- the lovely dell green runs at an angle to the tee shot and is hidden by a large dune in front. At 231 yards it is a tease! Go left and have an easy wedge in, or have a go?

There were other good holes at Quivira as well- the plunging, snaking par 5 twelfth hole is unique, and the downhill par 4 sixteenth with rocks in the fairway to avoid also appealed to me. Overall Quivira proved to be a real hoot to play, somewhere spectacular, dramatic and utterly memorable. Overall I don't think it is the best course we played, but it is a Travelling Golfer must play- it's worth travelling to see and play.

I am glad I took some time after golf to send Louie up in the wind- I think we got some amazing footage- although into the wind he struggled to move forward at all....

On Friday we teed it up again at The Ocean Course for the tournament finale. Again the Ocean Course impressed us all, and we thought it good value to play such a course twice and have some idea where we going... 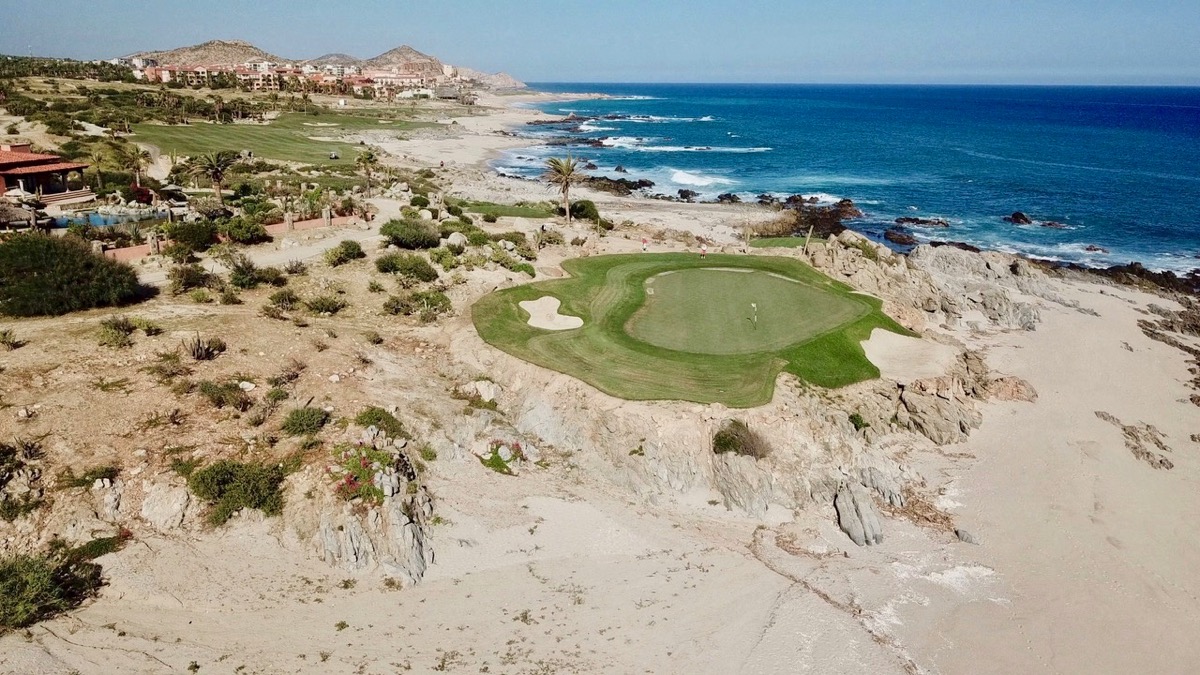 John Hillard was thrilled to take the chocolates again, and deserved his win after a pretty consistent week. 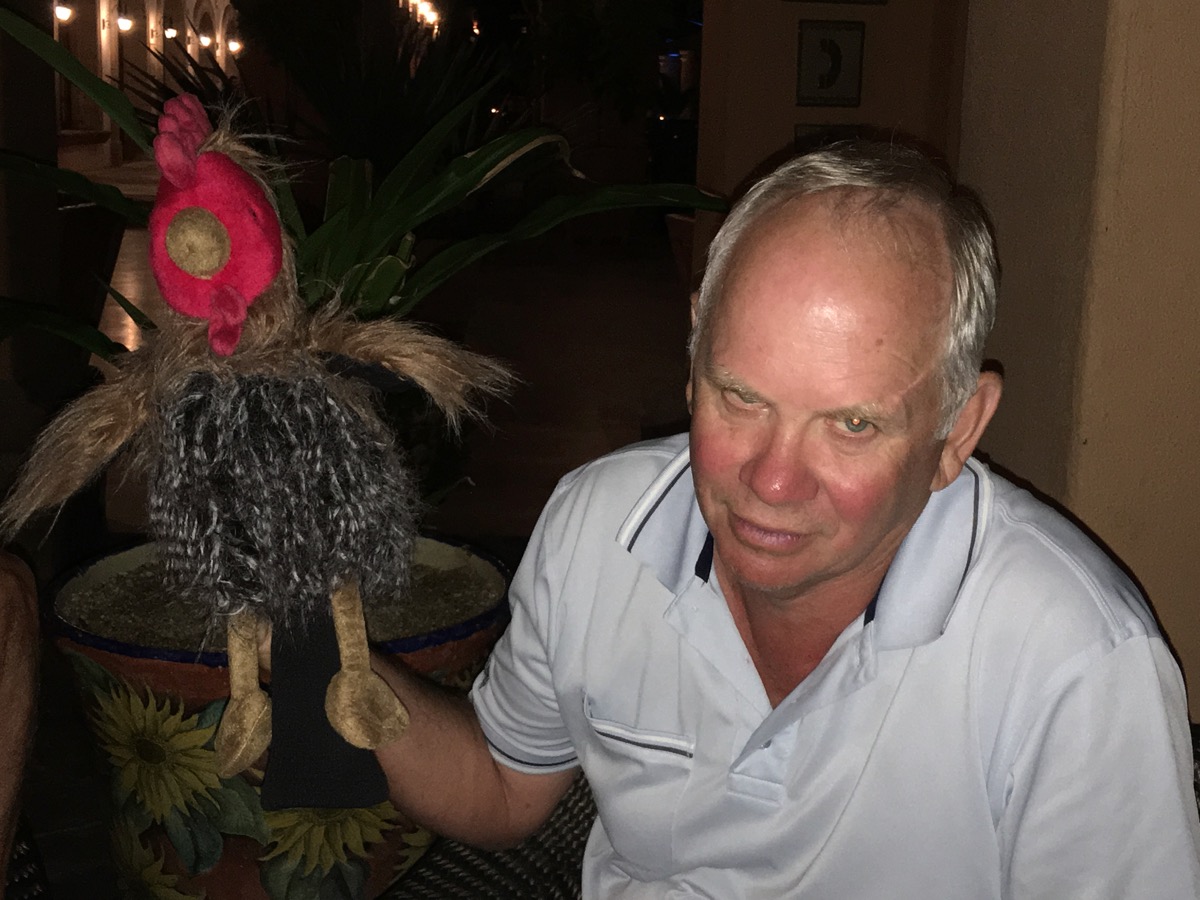 John Hillard was thrilled to win the title again

After golf Geoff & I were given permission to inspect The Desert Course, which was closed with storm damage. It is a Tom Weiskopf design and generally a little more forgiving off the tee, and with less penal bunkering. Nevertheless is a world class course and an ideal companion to The Ocean Course 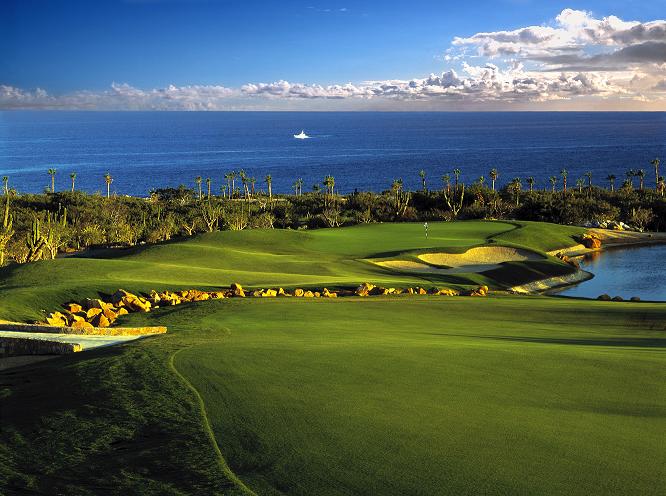 Most were flying out on Saturday afternoon at 4pm, so naturally it was decided that another game of golf would be warranted.

I organised to get access to Cabo Real GC, designed by Robert Trent Jones Jnr.

It was pretty good, and definitely worth a game. The front nine was good resort golf with a couple of interesting holes, but the back nine was excellent with very good use of the mountain terrain.

Then most of the crew headed to the airport leaving Geoff and I to our own resources for another day.

On Sunday morning we visted Palmilla GC- where we were given a guided tour of the three nines designed by Jack Nicklaus- the Mountain, The Arroyo, and The Ocean

The locals prefer the Mountain/Arroyo combo, possibly because it plays easier, but the Ocean nine looked very strong to me. Each nine had a few standout holes- the par 5 fourth hole requires not one, but two canyon crossings to a dramatic green setting, and is the most memorable hole.

Thanks for your company guys, it was most enjoyable.

The group have instructed me on their preferences for 2018, so I will report back in due course..