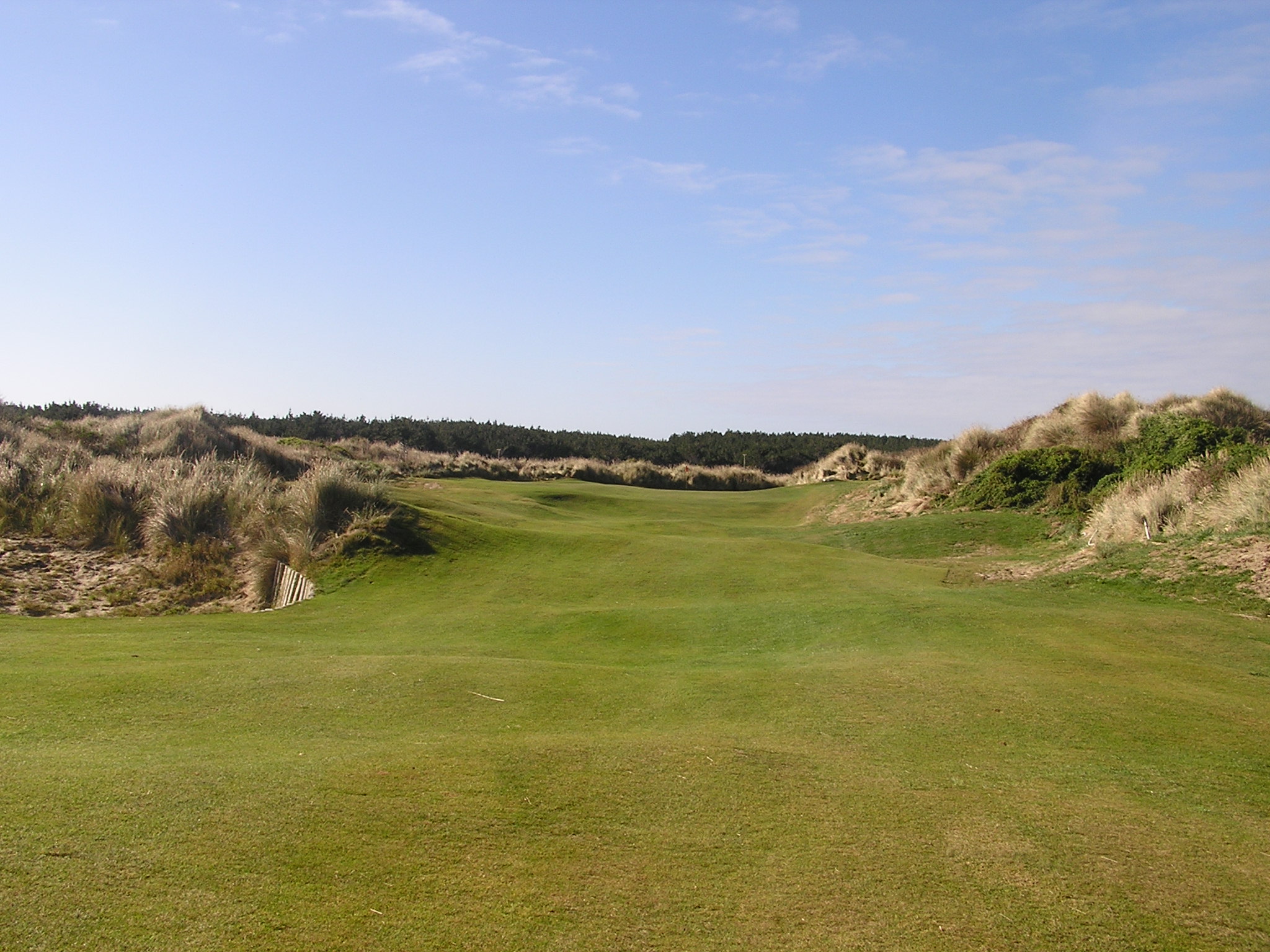 Stephen Jensen from Peak Golf Queenstown invited me to join his regular golfing foursome at the worlds southernmost links. Invercargill is over 2 hours drive from our base at Queenstown, but it was a spectacular drive....we left Queenstown with the sun shining and snow down to 500 metres...

I had illustrious company - big hitting tour operator and semi professional Stephen playing off 3, course architect Brett Thomson ( Jack's Point, The Hills ) playing off 10, Millbrook manager Brian Spicer, playing off 9, but capable of driving short par 5's - or missing New Zealand, and Pete Devine, former Microsoft exec, chairman at Millbrook, member of 47 clubs around the world - also playing off 9.....but with serious questions over his ability to control the flat stick.

We journeyed south on Friday and managed a warm up round at Otatara - a very pleasant local parkland course on the outskirts of Invercargill. No one starred although Stephen was on pace for a 54 early...

Saturday we were out on the links at Oreti Sands just after 9am, and basically had the place to ourselves.

This allowed us to play as a 5 - I can't remember when I last did that!

Following on from the previous day the "oldies" , the two Petes played 4bbb v SJ & BS.

But the main comp of the day was skins with all involved. Wisely I had suggested that the winner of a skin choose the next tee, but with Stephen winning early all the early holes were played off the back pegs - par 4's over 400 metres, and a par 5 nearly 600 metres - all into the wind...

Let me tell you about the course.

Oreti Sands in set in sand dunes, pine trees, and some swampy areas at the finish.

It looks to me that there are many hundreds of acres of linksland, but I understand that for financial reasons the course was originally routed on the easiest terrain, not necessarily the most suitable.

There is a lot of magnificent golfing territory here, but no money...

A few years back Greg Turner was brought in, and remodelled the course, adding a number of new holes. The club has only one maintenance man, plus members voluntary work.

Given that, the condition is remarkably good although the new holes were a tad rough in spots. Preferred lies fixed that.

New holes 2 & 3 head into pretty wild dune country, and with some very tight semi blind approaches for most on 2, lost balls were the order of the day.

The third was a par 3, with a lovely elevated green somewhat reminiscent of the 7th at Barnbougle. However the tee shot had to carry all the way over some really wild vegetation - so high that the more vertically challenged of our group had trouble sighting the green, and would have been lost forever if a wrong turn was taken en route from tee to green. Thereafter the course headed back into the more established holes which were a combination of some linksy and more parkland style holes through huge pine trees. Curiously whilst we were surrounded by dunesland and could hear the pounding surf the course never approaches the beach, and you never see the ocean...

It seems so wrong! 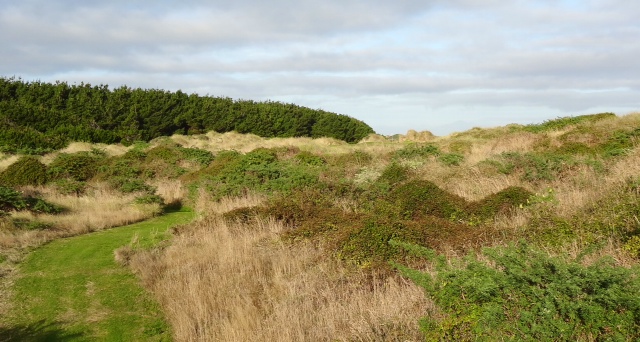 The final twist in the routing is some newer holes at 16 & 17 located in swamp. The 16th is a short almost drivable par 4 Cape hole around the swamp, and 17 a longish par 3 with the heroic carry over the swamp. Both are good holes, but totally unexpected in what appears to be a links environment... 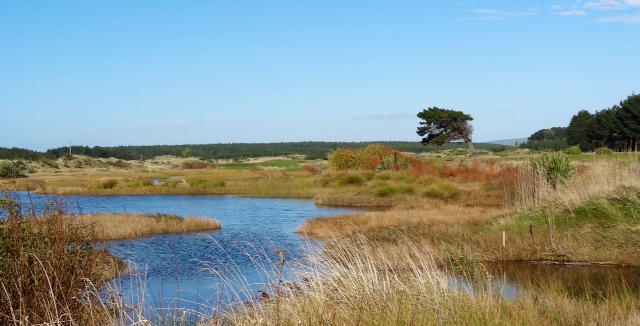 After being dragged kicking and screaming to the championship tees by the power hitting young fellas, a kick in birdie on the par 3 6th by PW, won foreskins, and more importantly took control of the tee for the wisened elder statesmen. The young blokes were taken to places they had never seen - social and even ladies tees where all the hazards were now in play!

All was now right in the golfing world as the longer hitters had to club down to stay in play, and were gradually overhauled in the match and the skins by the grey hairs.

Big hitting Brett ( known in certain golfing circles as "The Good Doctor" in reference to the influence he feels he had with Dr Alistair McKenzie) had some frustrations early and on the  5th hole let his traitorous golf bag have it with a 5 iron to the solar plexus (this bag had character).

But the bag had the last laugh...

On 7 tee Big Bad Brett pulled out his driver and found the shaft was neatly snapped half way...

Lesson: never ever take out frustrations on a petulant carry bag.

Now needing to carry a ridge into the wind , the advice from BS had us all chuckling when he suggested Brett hit a choke down driver....

With the wrinklies now in control, things took an unexpected turn when driverless Brett won a skin and took control of the tee. And he sent us back!

Off the back of the back tees the juniors again took the lead and a classic finish ensued. PW birdied with a clutch 10 footer to halve on 14 and save going 2 down.

On 16 Stephen ( aka The Angry Chicken ) took off the shoes and socks and hit a miraculous shot out of the swamp next to the green, and then horseshoed the chip for birdie - half!

After holding out for years, Stephen had done the right thing and married the lovely Jenny only weeks before. But now he really had cold feet!

In the end the skins and the matchplay came down to the last putt on the 18th.

With the younger generation publically doubting his putting prowess, Pete Devine calmly slotted a 4 footer to claim the chocolates!

Oreti Sands is certainly a fun place to play, if ever you happen to be down Invercargill way.

The course and the immediate area has enormous possibilities for a world class golfing destination.

It just needs significant financial backing, and a population base to support it.

One can only dream!

The Travelling Golfer can tailor a golf trip to New Zealand to suit your group. For itinerary suggestions please see Destinations: New Zealand