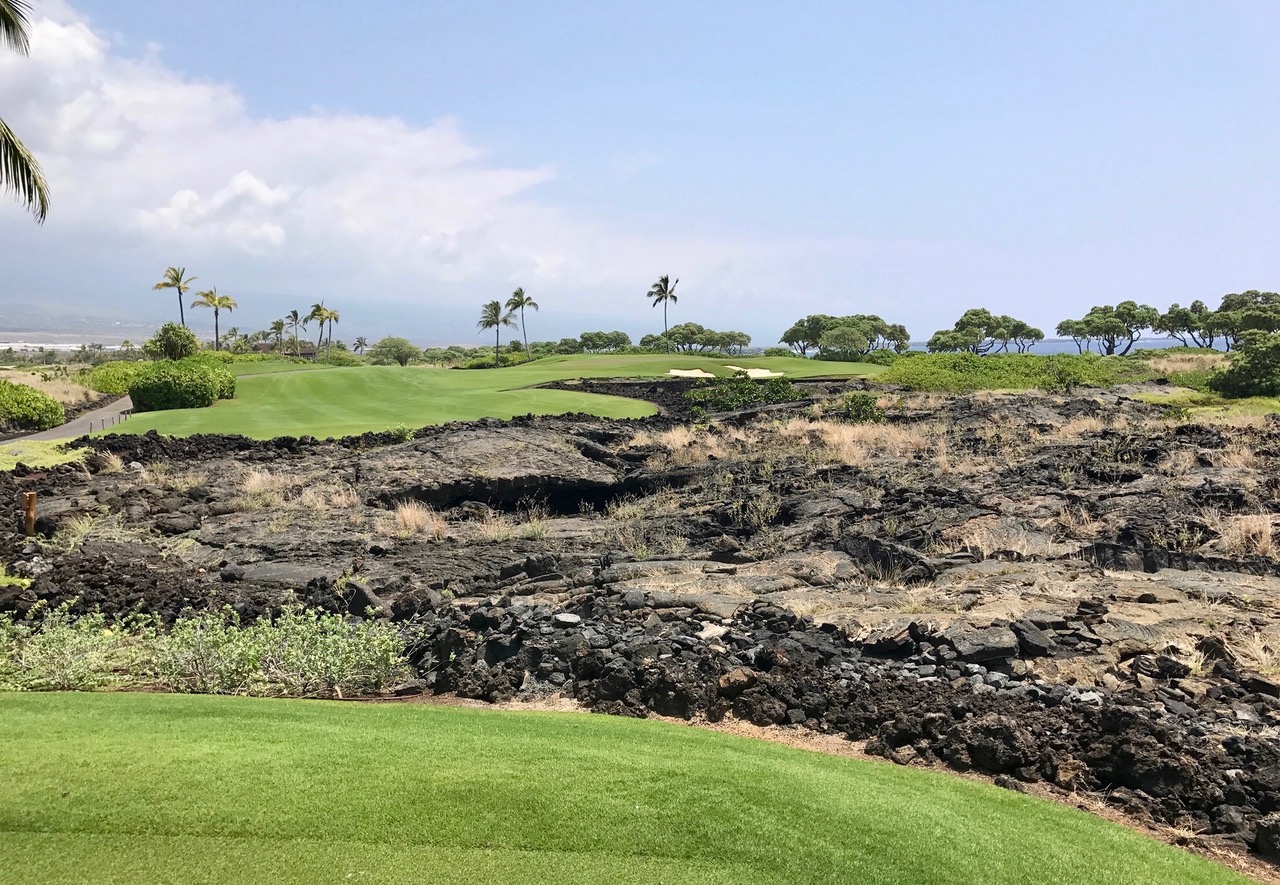 Essentially a real estate play, the golf course at Kohanaiki is located close to Kona airport providing easy access from a number of the major US cities

The course was designed by Rees Jones and opened in 2013, although he originally started work on the project in 2007/8 when renovating Mauna Kea.

The surrounding real estate development is quite magnificent, and at the time we played there 70 of a projected 350 high end resort homes had been built- I can't imagine a nicer place to get away to!

No expense has been spared in creating what is essentially a very high end country club. Families have been well catered for with a very tasteful beach club, and a clubhouse set up with all number of family activities in mind- a movie theatre, ten pin bowling alley, games room, cards room etc
The mens and ladies facilities incorporate indoor and outdoor showers, saunas, spas, hot pools, cold pools….
No detail has been overlooked, no expense spared.
I know of no club that has done a better job of setting up to look after all the needs of the high end golfing client and family

The golf course is a delight to play as well. Fairways are wide, and greens are big- welcoming the family golfer- but although most greens have a number of pin options the better golfer will find that often enough the pin is tucked behind bunkers or swales and not so easy to access. In other words the course is playable for the longer handicapper but still challenging and interesting for the better player.

I was immediately struck by fairway surrounds at Kohanaiki with lava framing both sides of the fairway on early holes (1-6). What was unusual was that the fairways were set a few metres below the level of the surrounding lava providing a lava wall each side of the hole. It looked great and with the occasional palm tree also planted in the first cut of rough it is a unique and compelling look, and one unique to Kohanaiki (as far as I know) 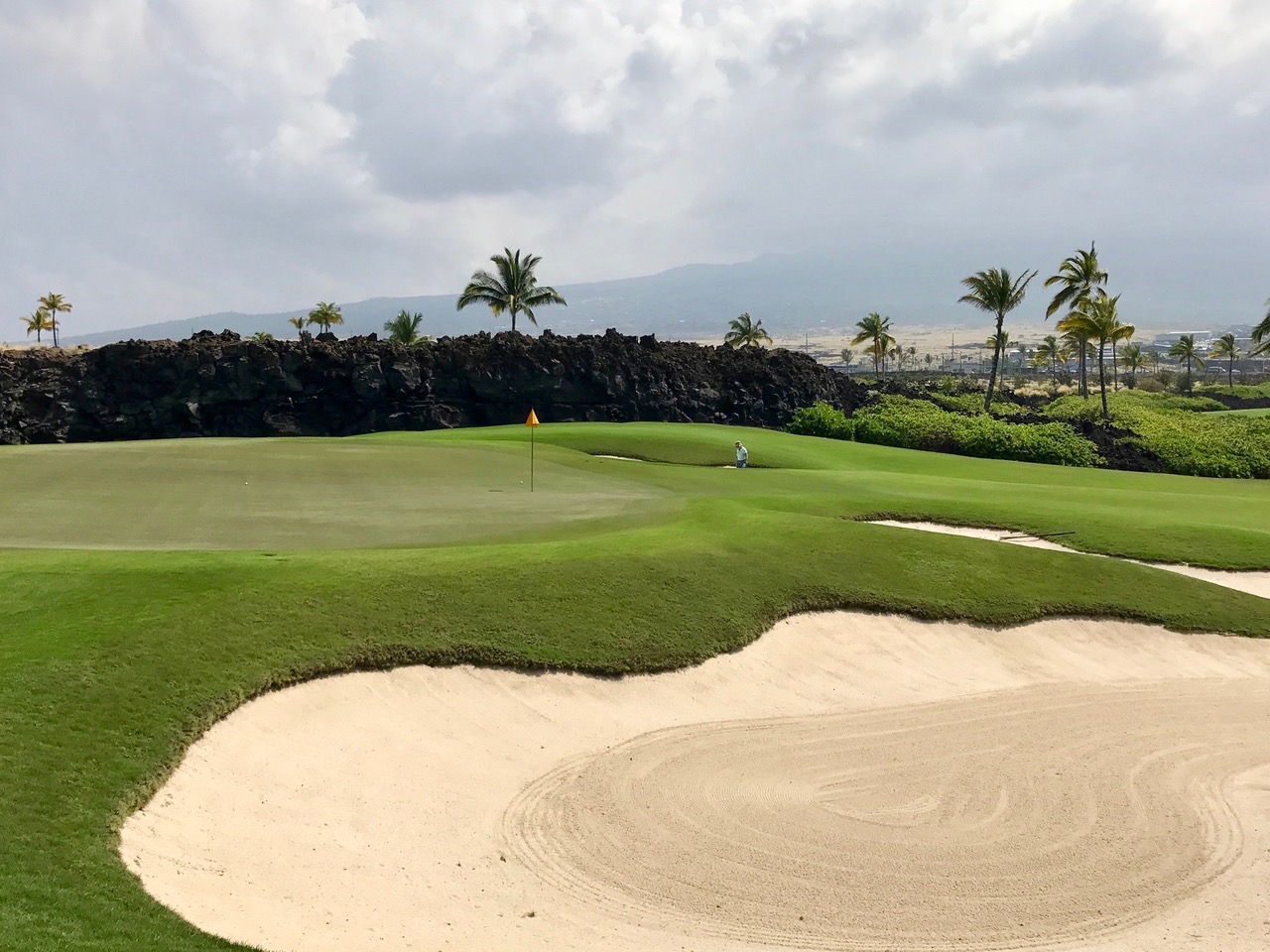 Kohanaiki GC- The fairways are routed between Lava 'Walls'

Just when the course began to have the sniff of becoming a little repetitious, holes 7 & 8 introduced water hazards to change the look and add some excitement to the round. Both are good holes

In the back nine the tension builds as you can sense the course heading for the sea. Hole twelve is a strong par 5 heading directly toward the water- but along the way you have to negotiate all number of hazards- sand, shrub, ancient alters, and a tightening fairway…
It is one of the most demanding holes on the course, especially when the wind blows! 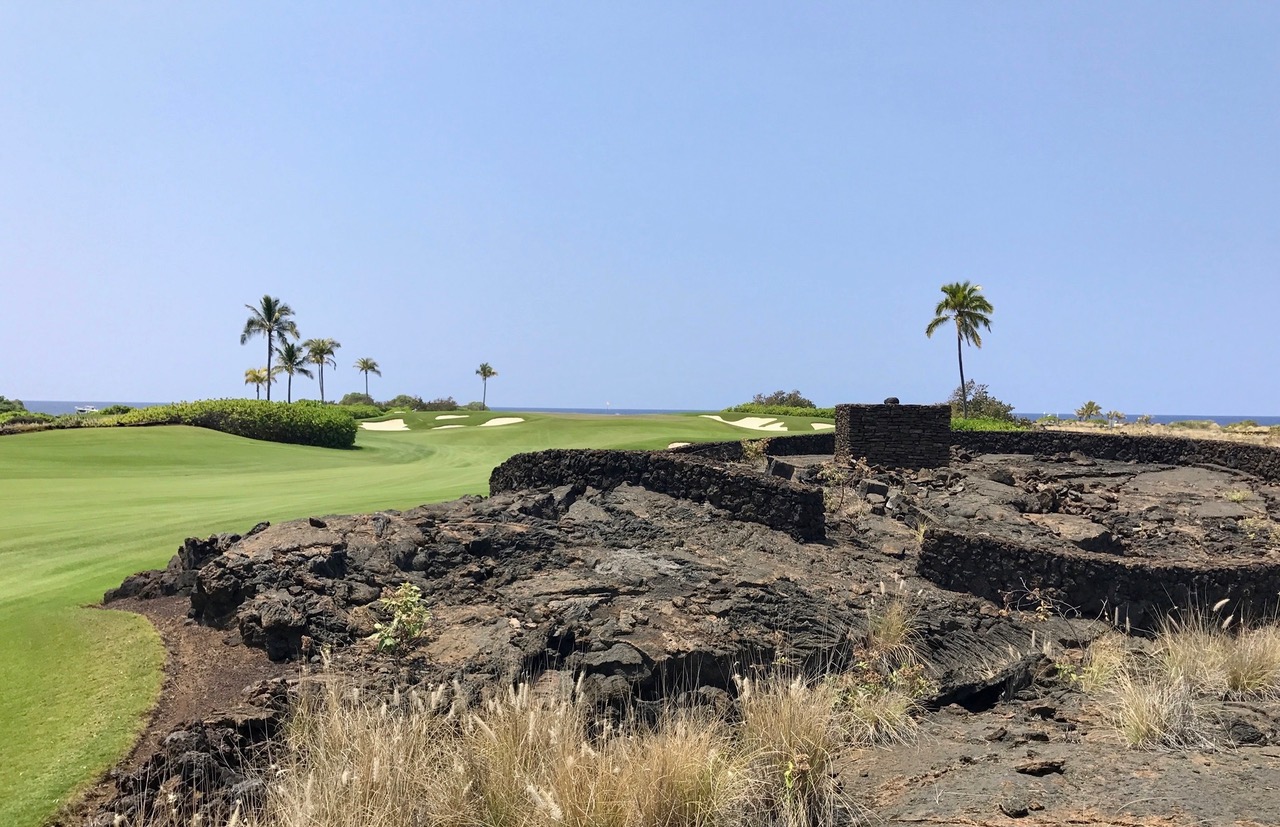 After the par-5 12th hole turns toward the ocean, the four most dramatic holes -- two par 3s and two par 4s -- play along the beach, requiring shots over hazardous pits of black volcanic rock.

This run of holes along the beach are the highlight of the round, and combine lava carries, with exposure to the sea breezes. Hole 13 continues the drama with a mid length par 3 over lava and shrubbery to an elevated and contoured green. It requires good club selection and a solid blow.

Fourteen is a short par 4 with a raised island green surrounded by lava. It’s a thrilling little hole. 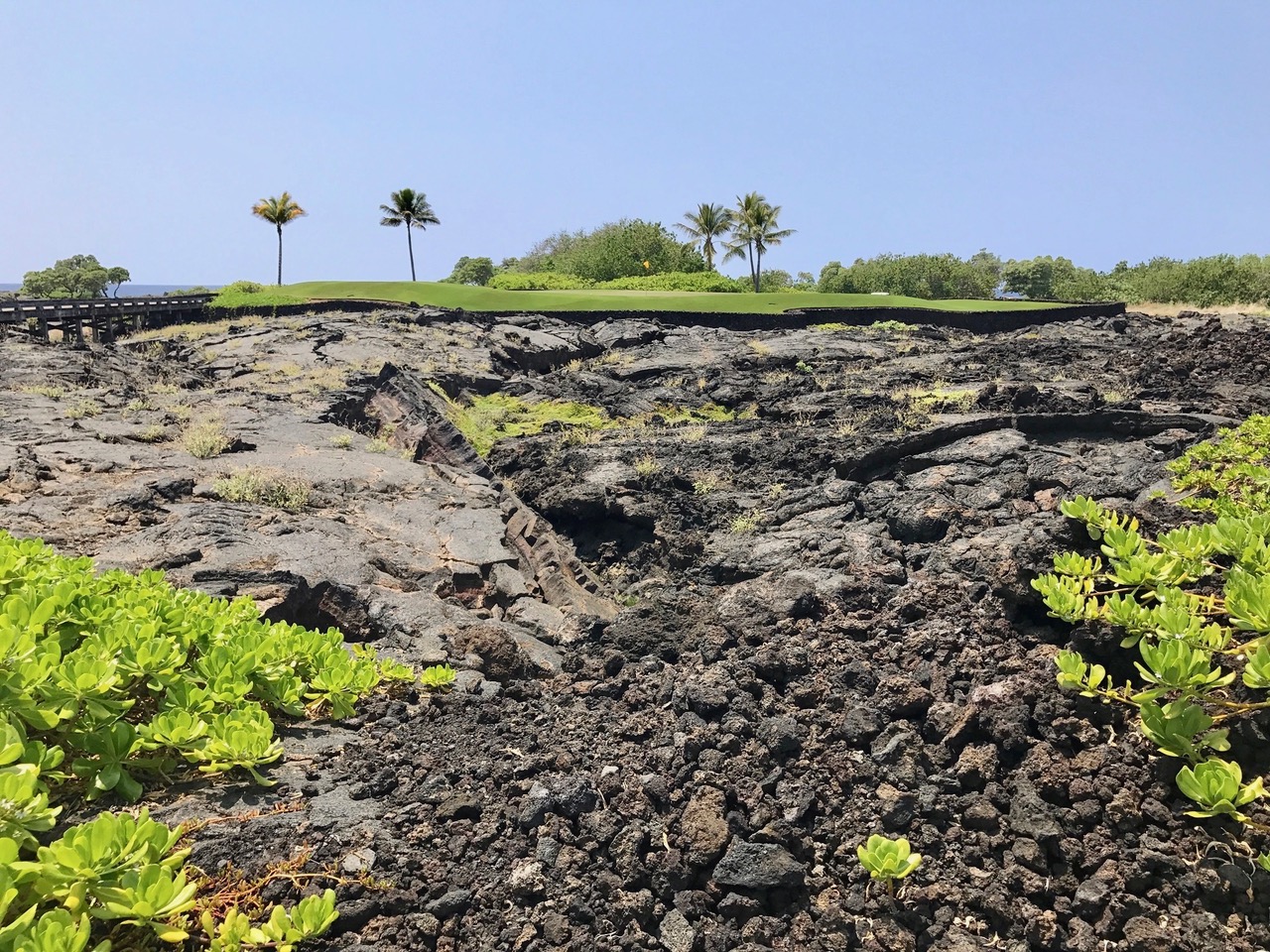 Fifteen is another par 4 which demands the approach shot fly a lava field to a contorted and slightly raised target. The green here will sort out the men from the boys!

The last beach hole is the sixteenth, and it is a tough medium length par 3 hard against the shoreline. Any success here will require a well struck iron to carry both the lava and green side bunkering to reach the dancefloor.

While the par 5 seventeenth moves away from the beach it maintains the golfers' interest. It is a dog leg par 5 which asks the question of the golfer as to the line of his tee shot-  the brave can get home in two if successful. At this point the first time visitor should take a minute and check out the beach club. It's not too shabby!

The final hole is going to be remembered because of the image of the impressive clubhouse and walls as its backdrop, but in reality it is a strong hole with a challenging green- to post a score you will need to hold your nerve


Kohanaiki impresses on a number of levels:

The course is walkable but has some long distances from green to tee here and there. It really is a cart course.
Overall I rate Kohanaiki very highly- certainly it is one of THE best courses in the Hawaiian Islands.  it is just a pity that many will never get the chance to see it...
It is a gem.

Kohanaiki GC is a private club, and can only be played by members and their guests.

The Travelling Golfer can tailor a golf trip to Hawaii to suit your group. For itinerary suggestions see Great Golf Destinations: Hawaii- Golf on The Big Island